PGA back at Southern Hills as Mickelson skips title defense 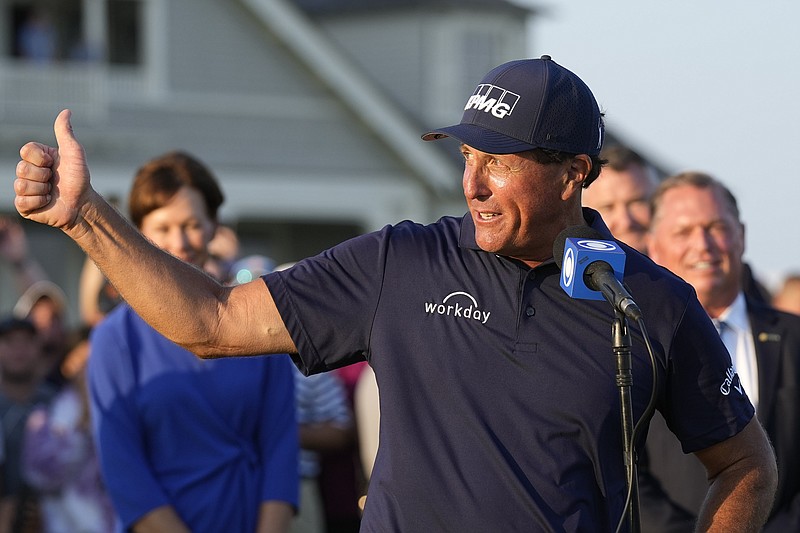 Phil Mickelson speaks after winning the PGA Championship on the Ocean Course on May 23, 2021, in Kiawah Island, S.C. Mickelson announced Friday he would not defend his title. - Photo by David J. Phillip of The Associated Press

The anticipation had been building the last few weeks for the PGA Championship, just like it was for the Masters. And just like the last major, the hype was more about who played than who had a chance to win.

Tiger Woods not only played Augusta National, he made the cut.

Phil Mickelson won't even make it to the first tee at Southern Hills.

Six days before the opening round on the classic course in Tulsa, Oklahoma, Mickelson decided not to defend his title and extend his three-month hiatus from golf.

And to think it was just one year ago when Mickelson celebrated one of the most stunning feats in 161 years of the majors. He won the PGA Championship at Kiawah Island at age 50 to become golf's oldest major champion.

The last PGA champion who didn't defend was Woods in 2008 as he recovered from reconstructive surgery on his left knee. Before that it was Ben Hogan in 1949, who was nearly killed some four months earlier when a bus hit his car in west Texas.

Mickelson's injuries were more self-inflicted. He kept everyone guessing when he signed up for the PGA Championship on April 25, even if it was a matter of procedure. His manager said Lefty was merely keeping his options open, and then he shut them on Friday.

"I personally think it's an unbelievable mental challenge to come back and play after what he's put himself through. I don't think it's as easy as just getting back on the bike and arriving at a golf tournament and playing, said six-time major champion and CBS analyst Nick Faldo.

Mickelson is sure to be a topic one way or another. Alan Shipnuck's unauthorized biography on Mickelson is to be released on Tuesday.

His public image took a beating in February when Shipnuck published an excerpt of his book in which Mickelson outlined his involvement with a Saudi-funded rival league.

He was dismissive talking about the killing of Washington Post columnist Jamal Khashoggi and Saudi Arabia's human rights record, saying it was worth getting involved if it meant having leverage to change how the PGA Tour operates. He even said he recruited three other players to pay lawyers to write the new league's operating agreement.

Top sponsors dropped him, Mickelson released a statement that read more like an explanation than an apology, and he said he "desperately" needed time away.

Now it's a matter of when he returns. His absence figures to be glaring, one of several subplots to a major that is sure to provide intrigue even before the first shot is struck.

Woods hasn't declared for certain that he will play another major, though he was in Tulsa last week to play -- and walk -- a practice round, and it would be a surprise if he didn't play. Woods won the PGA Championship at Southern Hills the last time it was there in 2007.

It's not exactly the same course. Gil Hanse and Jim Wagner finished a restoration project at Southern Hills geared toward making the course a modern test without losing the charm of its original Perry Maxwell design.

Along with bringing back a creek that cuts through the 10th and 17th fairways, the edges of the greens now funnel shots away from the putting surfaces instead of toward the center, putting a premium on being in the fairway and at the right angle depending on the pin.

Woods has cast such a huge shadow on the sport for so long that it's easy to overlook the strongest field of the four majors and who might best have a chance of hoisting that 27-pound Wanamaker Trophy.

That starts with a pair of Texans who head to the other side of the Red River to chase different versions of the Grand Slam.

Masters champion Scottie Scheffler has a long way to go, and while he rarely thinks about anything beyond the next shot, he likely is aware only three players in the last 20 years have won the first two majors of the year.

Even so, he has everyone's attention with his four big titles in the last four months that have taken him to No. 1 in the world.

"He's setting the bar pretty high right now and he's kind of the guy to chase for all of us," Will Zalatoris said. "What he's doing is borderline Tigeresque. It's pretty cool to see."

Jordan Spieth is chasing the career Grand Slam. This is his sixth shot at the Wanamaker Trophy since he picked up the third leg at the 2017 British Open, and it might be his best chance. His swing is getting closer to where he can trust it, and his confidence was boosted by his playoff win at Hilton Head a month ago.

Spieth and Justin Thomas stopped by Southern Hills at the start of the week. Spieth last played it in 2009, when he lost in large playoff for the final four spots of match play in the U.S. Amateur. He shot 75. He was 16.

And so much has changed, especially with Southern Hills.

The most noticeable part of the restoration were the edges of the greens to make shots funnel away from the putting surface. Spieth felt the targets were smaller than they looked. And with a hydronic system beneath the greens that allows for greater control of turf firmness, Spieth is expecting a precise test.

"I think it's going to be one of the higher scoring PGAs that we have seen," he said.

Southern Hills is hosting its eighth major since 1958 -- three U.S. Opens -- and the last five champions are in the World Golf Hall of Fame.

It wasn't supposed to host the PGA until 2030. This year's championship had been scheduled for former President Donald Trump's course in Bedminster, New Jersey. But four days after the violent Jan. 6 insurrection at the U.S. Capitol as Congress was certifying the presidential election, the PGA of America voted unanimously to move it to Southern Hills.

It avoided what could have felt like a circus. And with Mickelson no longer in the field, the PGA Championship avoided one of a different variety. 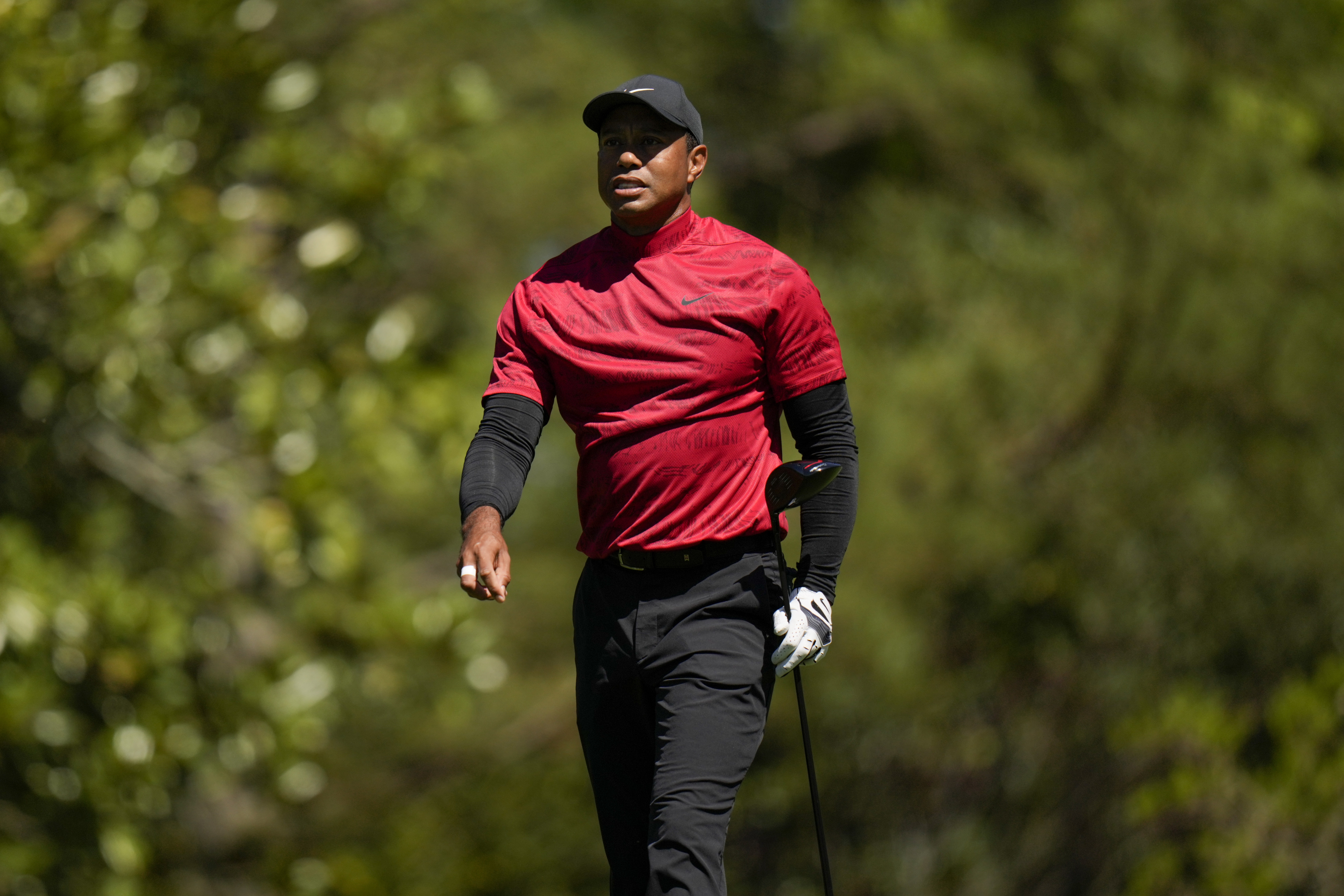 FILE - Tiger Woods walks down the fifth fairway during the final round at the Masters golf tournament April 10, 2022, in Augusta, Ga. Woods is expected to play the PGA Championship on May 19-22 at Southern Hills in Tulsa, Okla. It would be his second major since badly injuring his right leg in a car crash in February 2021. (AP Photo/Jae C. Hong, File) 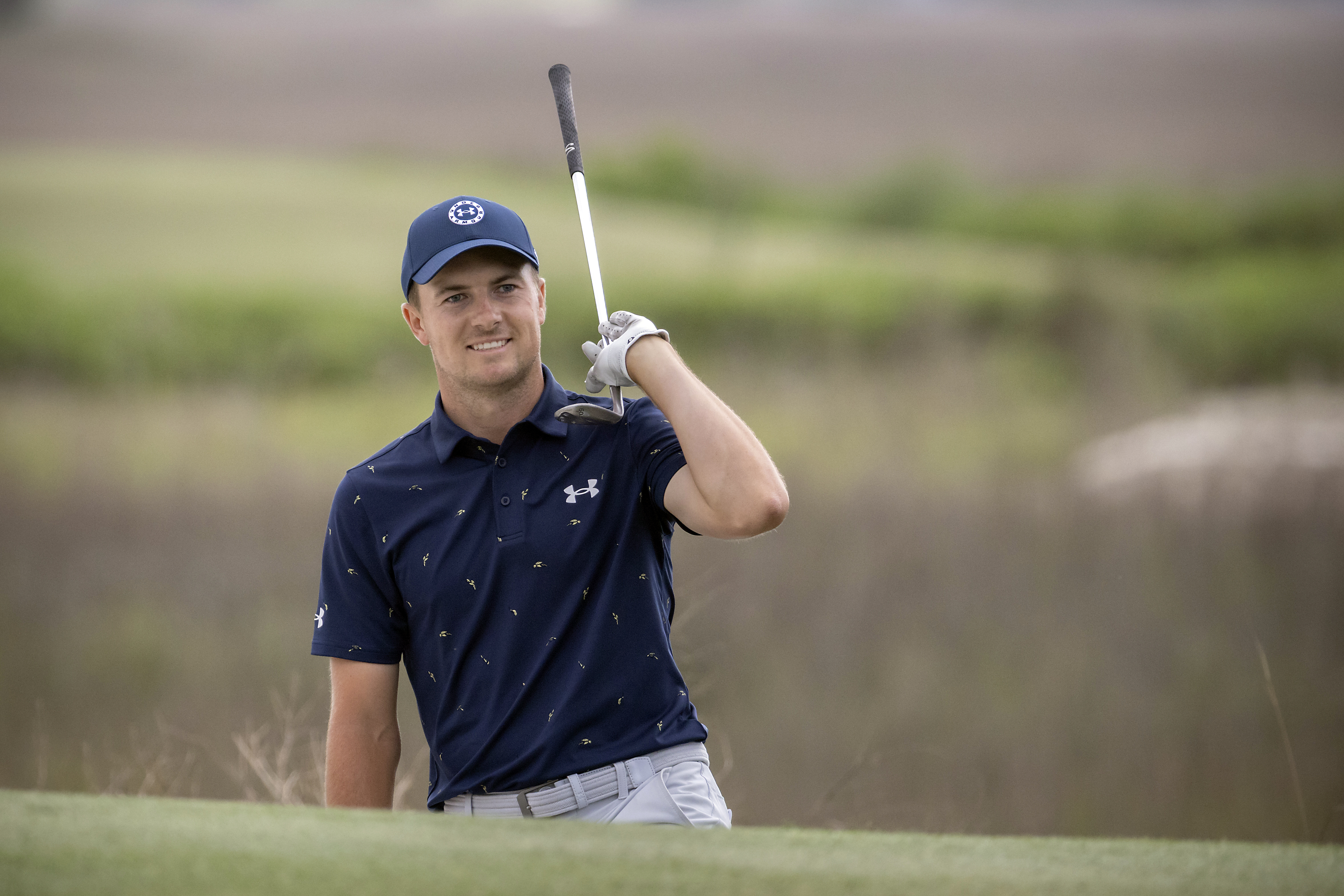 FILE - Jordan Spieth celebrates from the front bunker after chipping in at the 18th hole during the final round of the RBC Heritage golf tournament April 17, 2022, in Hilton Head Island, S.C. Spieth gets another crack at the career Grand Slam when he plays the PGA Championship on May 19-22 at Southern Hills in Tulsa, Okla. (AP Photo/Stephen B. Morton, File) 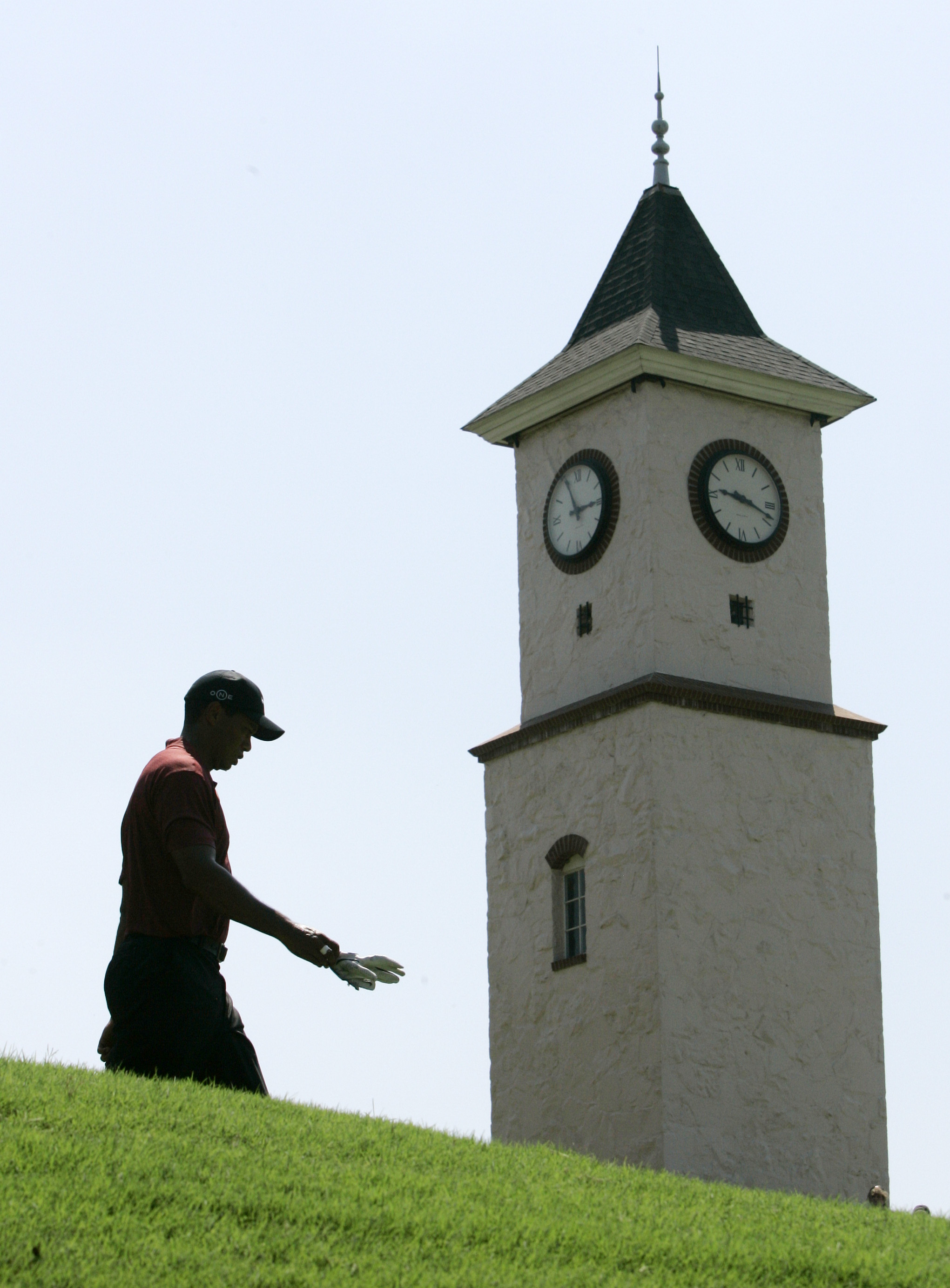 FILE - Tiger Woods walks down the fifth fairway during the final round of the 89th PGA Golf Championship at the Southern Hills Country Club in Tulsa, Okla., Aug. 12, 2007. Woods is expected back as the PGA returns to Southern Hills for the fifth time, May 19-22. (AP Photo/Charles Krupa, File) 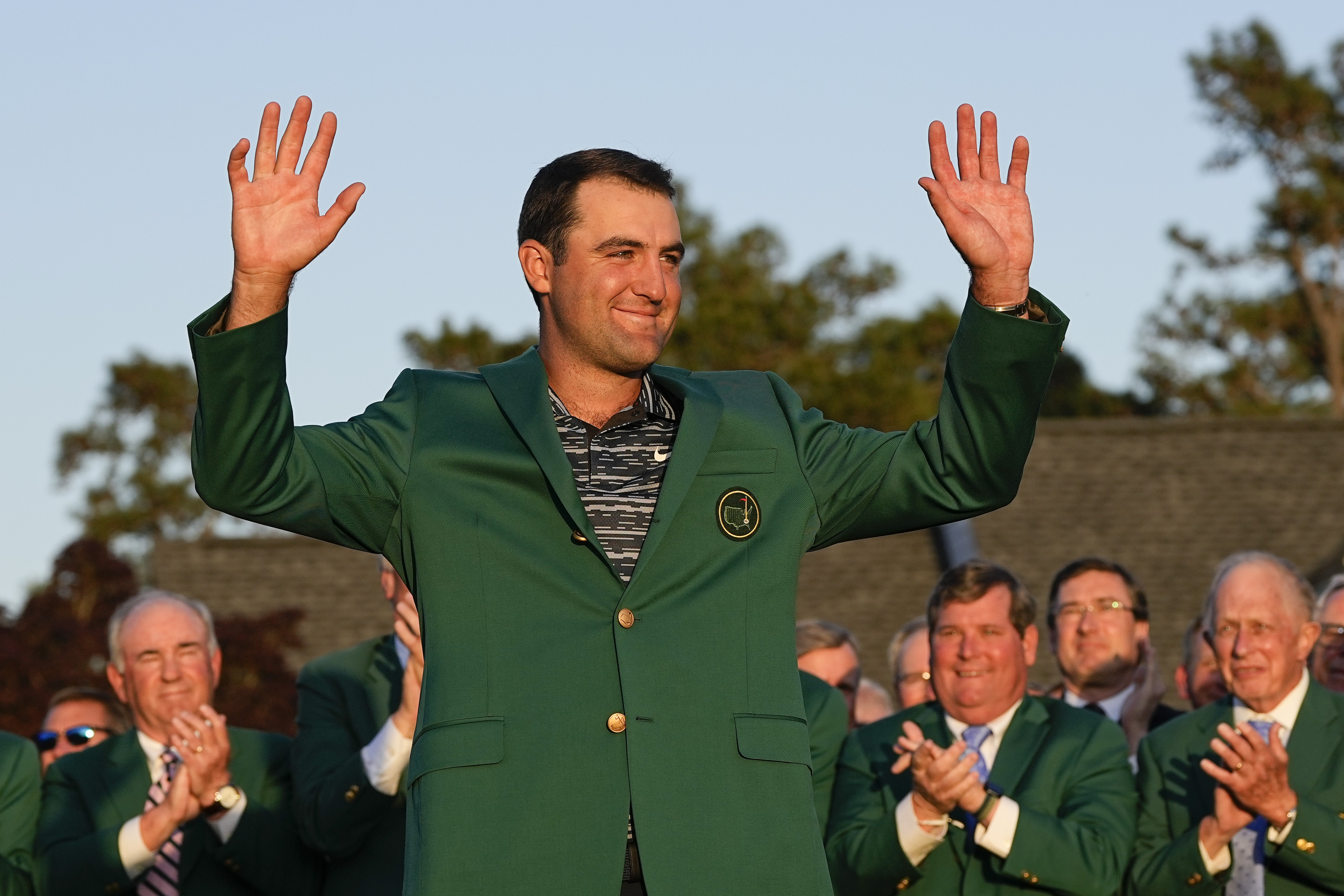 FILE - Scottie Scheffler celebrates after putting on the green jacket after winning the 86th Masters golf tournament, April 10, 2022, in Augusta, Ga. Scheffler goes after the second leg of Grand Slam when he plays the PGA Championship on May 19-22 at Southern Hills in Tulsa, Okla. (AP Photo/David J. Phillip, File)