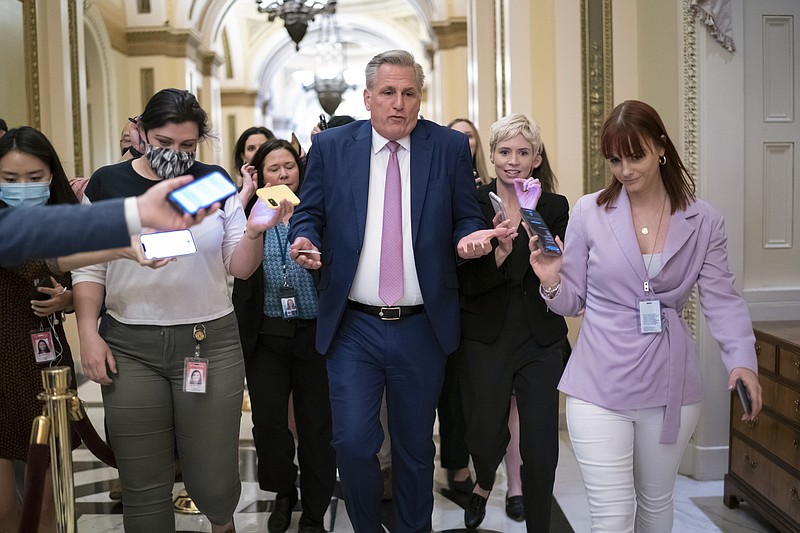 House Minority Leader Kevin McCarthy, R-Calif., heads to his office surrounded by reporters after House investigators issued a subpoena to McCarthy and four other GOP lawmakers as part of their probe into the violent Jan. 6 insurrection, at the Capitol in Washington, Thursday, May 12, 2022. The House Select Committee on the January 6 Attack has been investigating McCarthy's conversations with then-President Donald Trump the day of the attack and meetings that the four other lawmakers had with the White House as Trump and his aides conspired how to overturn his defeat. (AP Photo/J. Scott Applewhite)

WASHINGTON -- The Jan. 6 committee's remarkable decision to subpoena House Minority Leader Kevin McCarthy and other congressional Republicans over the insurrection at the Capitol is as rare as the deadly riot itself, deepening the acrimony and distrust among lawmakers and raising questions about what comes next.

The outcome is certain to reverberate beyond the immediate investigation of Donald Trump's unfounded efforts to overturn Joe Biden's presidential election victory. Fuming Republicans vow to use the same tools, weaponizing congressional subpoena powers if they wrest control of the House in November's midterm elections to go after Democrats, even at the highest levels in Congress.

"It's setting a very jarring and dangerous precedent," said Rep. Peter Meijer of Michigan, who was among the handful of Republicans who voted to impeach Trump over the insurrection.

On Friday, the subpoenas for McCarthy and the four Republican lawmakers were served as the committee investigating the Jan. 6, 2021, attack on the Capitol is wrapping up its initial phase. Public hearings are expected to begin in June, and the panel is still determining whether to call Republican senators to testify.

While the summons for McCarthy and the other Republican lawmakers was not wholly unexpected, it amplified concerns over the new norm-setting in Congress.

McCarthy, in line become House speaker, brushed past reporters Friday, declining to say whether he would comply with the committee's summons for testimony. Asked repeatedly for comment, McCarthy on Friday was mum.

The other Republicans, Andy Biggs of Arizona, Mo Brooks of Alabama, Jim Jordan of Ohio and Scott Perry of Pennsylvania, have decried the investigation as illegitimate, and it is unclear whether any of them will comply. The four all had conversations with the Trump White House about challenging the election, and McCarthy tried unsuccessfully to convince Trump to call off the Capitol siege that day as rioters broke windows near his own office.

"They have a duty to testify," said Rep. Jerrold Nadler, D-N.Y., chairman of the House Judiciary Committee.

"I mean, we're investigating an insurrection against the United States government," Nadler said. "An insurrection. Treason."

The next steps are highly uncertain as the House, with its Democratic majority, weighs whether to take the grave, if unlikely, action of holding its own colleagues in contempt of Congress by voting to send a criminal referral to the Department of Justice for prosecution.

While other lawmakers have voluntarily come forward to talk to the committee, a move to force the subpoenaed members to share information would be certain to become tangled in broader constitutional questions. Among them, whether the executive branch should be intervening in the governance of the legislative branch that tends to make its own rules. Action would drag for months, or longer.

Instead, the House could take other actions, including a vote of public censure of McCarthy and the four GOP lawmakers, a referral to the Ethics Committee, the imposition of fines or even the stripping of their committee assignments.

"I don't talk about what happens in the Jan. 6 committee," she said in the halls, deferring to the panel as she typically does.

Rep. Bennie Thompson, D-Miss., who chairs the bipartisan Jan. 6 panel, said it has options after the five GOP lawmakers refused its request for voluntary interviews and now face the summons.

"Look, all we're saying is, these are members of Congress who've taken an oath," he said. "Our investigation indicated that January 6 did actually happen, and what people saw with their own eyes did, in fact, happen."

It's a volatile time for Congress, with an intensified political toxicity settling into a new normal since the Capitol insurrection left five dead. That included a Trump supporter shot by police and a police officer who died later after battling the mob.

The Capitol is slowly reopening to tourists this spring after being shuttered over security concerns and the ongoing COVID-19 crisis, but an unease remains. Tensions run high and at least one lawmaker on the panel, Rep. Liz Cheney, R-Wyo., a vocal Trump critic, is flanked daily by security guards, a jarring sign of how America has changed.

Trump's influence over the Republican Party remains strong, leaving many GOP lawmakers unwilling to publicly accept Biden's election victory, some promulgating their own false claims of a fraudulent 2020 election. Courts across the nation have rejected claims the election was rigged.

If Republicans win power this fall, they are almost certain to launch investigations into Biden, Jan. 6 and other topics, now armed with the tool of subpoenas for fellow lawmakers.

"It's a race to the bottom, is what it is," said Rep. Thomas Massie, R-Ky., who won Trump's endorsement last week for his own re-election, despite having sparred with him in the past.

"I mean, I hope when we get in power, we don't do the same things that they're doing," he said. "But you know, turnabout is fair play."

While Democratic leaders say they would happily testify if summoned by newly empowered Republicans next year, more rank-and-file lawmakers privately express unease with what comes next, worried about being drawn into the fray.

Congress issuing a subpoena to one of its own would be rare, but not a first.

The ethics committees have subpoenaed individual lawmakers over potential wrongdoing. That includes the Senate voting in 1993 to subpoena the diary of Sen. Bob Packwood, R-Ore., during an investigation into allegations of sexual harassment. Facing expulsion, he resigned first.

But traditionally, congressional subpoenas are pointed outward. Shortly after the country's founding the first congressional subpoena was issued not to a lawmaker but a real estate speculator who tried to purchase what is now Michigan and attempted to bribe members of Congress, according to the House history website.

The Jan. 6 panel has wrestled privately for weeks over whether to subpoena fellow lawmakers, understanding the gravity of the action it would be taking.

Once the members of the committee made their choice to issue the subpoenas, Pelosi was informed of their decision. 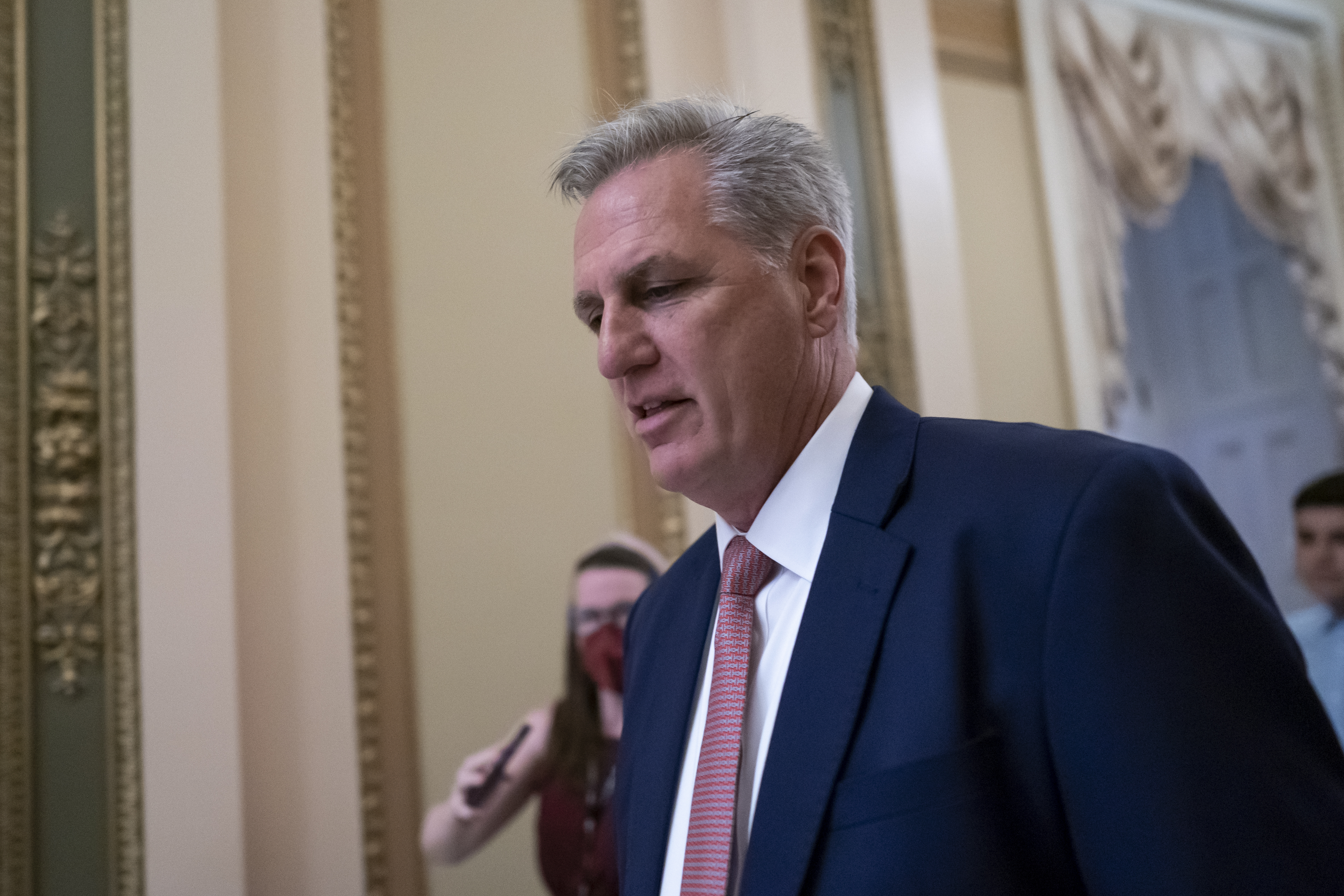 House Minority Leader Kevin McCarthy, R-Calif., walks to the chamber from his office the day after House investigators issued a subpoena to McCarthy and four other GOP lawmakers as part of their probe into the violent Jan. 6 insurrection, at the Capitol in Washington, Friday, May 13, 2022. The House Select Committee on the January 6 Attack has been investigating McCarthy's conversations with then-President Donald Trump the day of the attack and meetings that the four other lawmakers had with the White House as Trump and his aides conspired how to overturn his defeat. (AP Photo/J. Scott Applewhite)