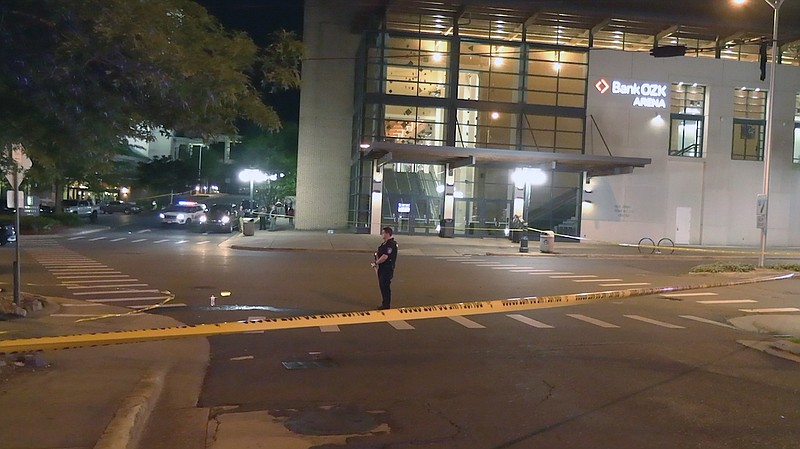 Crime scene tape surrounds the scene at the intersection of Convention Boulevard and Laurel Street, outside the Hot Springs Convention Center, Thursday night in the aftermath of a shooting where four people were injured by gunfire, with one victim later dying. - Photo by Andrew Mobley of The Sentinel-Record

Police returned fire with a lone gunman Thursday night outside the city's convention center after he allegedly shot into a crowd that had gathered nearby as the Hot Springs World Class High School graduation was ending, killing one person and wounding three others, according to police and sheriff's reports.

The alleged shooter, Charles Johnson, 25, was wounded after police returned fire, but was able to flee the scene. He was later located and arrested at a local hospital while being treated for his wounds, Hot Springs police said in a news release.

Michael Jordan, 39, was transported to a local hospital after being shot shortly after 9 p.m. Thursday at the intersection of Laurel Avenue and Convention Boulevard, and later died from his wounds, the release said.

The incident began shortly after the conclusion of the Hot Springs World Class High School graduation, which was held from 7 to 9 p.m. at the Hot Springs Convention Center, when a large fight broke out in an adjacent parking lot across from 400 Convention Blvd., the release said.

During the fight, HSPD officers and Garland County Sheriff's deputies were on the scene attempting to defuse the situation when a single gunman began shooting into the crowd, wounding four people. HSPD officers returned fire on the suspect, later identified as Johnson, who was wounded and fled the scene.

Johnson was still in the hospital on Friday with officers on prison detail guarding him, HSPD Officer 1st Class Omar Cervantes, the department's public information officer, told The Sentinel-Record Friday.

"The Officer Involved Shooting (OIS) is being investigated by the Arkansas State Police. The officers involved have been placed on Administrative Leave with pay until the conclusion of the OIS investigation," Cervantes said in the release.

"After the conclusion of the Hot Springs High School graduation, a big fight broke loose outside the convention center here," Cervantes told the newspaper Thursday night at the scene.

"It ultimately resulted in some gunfire, and unfortunately we had multiple victims who are all being treated right now at local hospitals. Obviously, it's a big case so we have a lot of guys working this right now. It is an ongoing investigation," he said at the scene, stressing "everything happened outside" the convention center.

The four victims were transported to both CHI St. Vincent Hot Springs and National Park Medical Center and officers were sent to both hospitals to lock them down, Garland County Under Sheriff Jason Lawrence told the newspaper at the scene Thursday.

There were reportedly large groups of people present at both hospitals following the shooting, prompting the lock downs.

"We are heartbroken that these violent events took place following such a beautiful celebration for our graduates and their families," Nehus said in the statement.

"Our Law Enforcement Officers and staff will continue to do all that we can to collaborate with local law enforcement agencies/officials to complete an investigation."

Nehus said school counselors and staff would be working with students (Friday) at school "who witnessed events or have concerns/fears. Our hearts and thoughts continue to be with the individuals and families who suffered injuries."

On Thursday, Nehus said in a statement just before 10 p.m. that no graduates were involved in the shooting.

"We are still learning more details about the unfortunate situation that took place outside of the Hot Springs Convention Center, following our Graduation Ceremony. We can confirm that none of our current students or graduates were involved. Our Law Enforcement Officers and staff will do all that we can to assist in the investigation. Our hearts and thoughts are with all individuals who suffered injuries tonight."

The school district's communications director, Adrianne Barnes, said the shooting occurred between 9 and 9:15 p.m., apparently because of a fight between two individuals. She said according to information available at that time, at least one person, who may have been a bystander, had been hit by the gunfire.

Barnes said that based on what she understood from the district law enforcement officers who were there, the shots came from the opposite side of the street on Convention Boulevard after two men had gotten into a fight.

Visit Hot Springs CEO Steve Arrison clarified Friday that no one was hurt inside the convention center.

"Nothing happened inside the Hot Springs Convention Center," he said. "We had a great graduation. Everything went well."

When asked if he planned to implement any new safety measures for the upcoming graduation ceremonies taking place in the convention center, Arrison said, "No, everything went fine at the convention center. After the graduation was over, our officers were outside of the building. We're just going to continue to do what we've done."