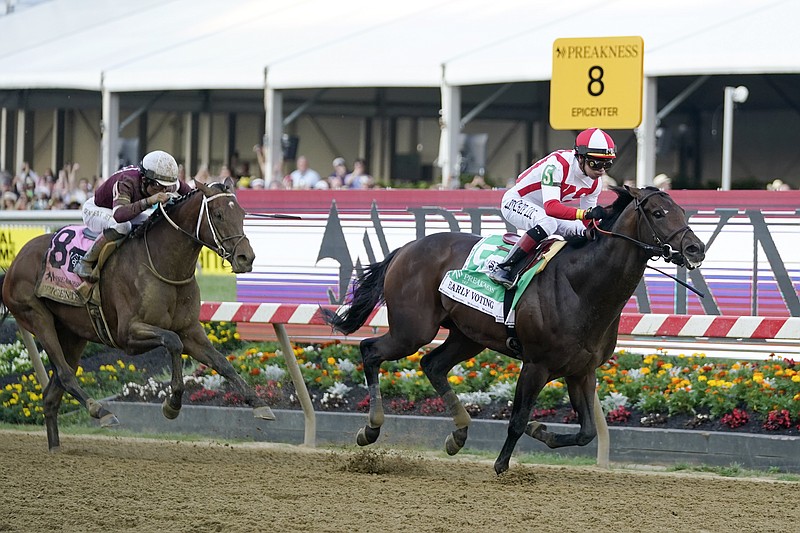 Jose Ortiz, right, atop Early Voting, heads to the finish line with Joel Rosario, atop Epicenter, at his tail before winning the 147th running of the Preakness Stakes at Pimlico Race Course Saturday in Baltimore. - Photo by Julio Cortez of The Associated Press

Get out the bubble wrap for yet another classic winner in the 2022 Triple Crown series.

Trainer Chad Brown said Preakness winner Early Voting will skip the June 11 Belmont Stakes in favor of a summer campaign on the East Coast. Early Voting scored the second Preakness victory for Brown and first for sire Gun Runner on Saturday at Pimlico in Baltimore. Epicenter, trained by Hall of Famer Steve Asmussen, finished second, as in the May 7 Kentucky Derby at Churchill Downs, with Creative Minister third and the filly Secret Oath, May 6 winner of the Grade 1 Kentucky Oaks, fourth of nine 3-year-olds entered.

Missing from Preakness 147 was Derby 148 winner Rich Strike, whose connections are awaiting the mile-and-a-half Test of the Champion at Belmont Park on Long Island. Winner of only one other race, that an off-the-turf mile at Churchill Downs last fall from which the Keen Ice colt was claimed for $30,000, Rich Strike and equally obscure jockey Sonny Leon scored an 81-to-1 surprise at Churchill Downs for trainer Eric Reed.

Brown, whose first Preakness win came in 2017 with Cloud Computing, held Early Voting out of the Derby, though finishing second in the mile-and-quarter race with Zandon. The former aide to the late Hall of Famer Bobby Frankel has three Grade 1-winning 3 year olds -- each with different owners -- thus Brown is spacing their races and keeping them apart. His plans for Early Voting include the Grade 1 Haskell July 23 at New Jersey's Monmouth Park and the Grade 1 Travers Aug. 27 at Saratoga in upstate New York. Also in play for the Preakness winner, he said, is the Grade 2 Jim Dandy July 23 at Saratoga, where Brown, a four-time Eclipse Award winner, ran away with the training title last year.

"These are the tough decisions you want to have," said Brown, who trains Early Voting for top client Klaravich Stables. (Baltimore natives Seth Klarman, who turned 65 Saturday, and Jeff Ravich). The same pair owned Cloud Computing, who beat Arkansas Derby winner Classic Empire in the Preakness after skipping the Derby.

After Early Voting returned to Belmont Sunday, Brown said, "I examined him ... and he's fine. He's happy in his stall and already laying down and taken a nap."

• Epicenter, the leading points qualifier for the Derby, is likely to pass the Belmont in favor of the Haskell and/or Travers, said owner Ron Winchell. Secret Oath, a three-time winner at Oaklawn, will target the Grade 1 July 23 Coaching Club American Oaks for 3-year-old fillies at Saratoga. The Arrogate colt, trained by Hall of Famer Wayne Lukas, ran third against males as the favorite in the Grade 1 $1.25 million Arkansas Derby April 2 at Oaklawn.