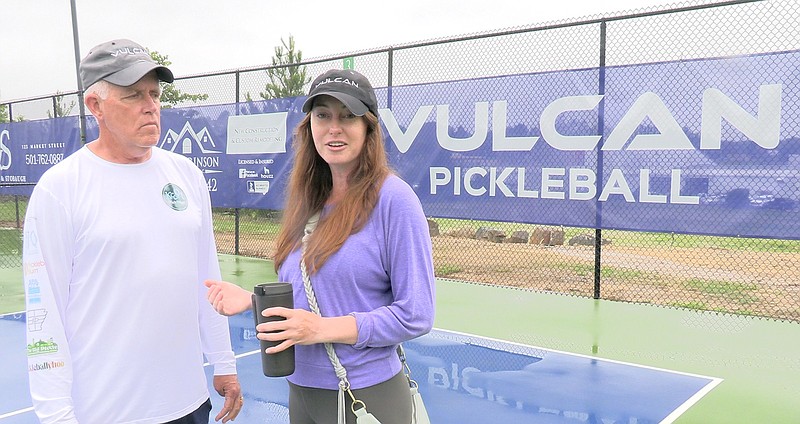 A fun and easy sport to play for all age groups and everyone in the family, pickleball continues to grow in the Spa City.

While the Spa City Classic, rebranded from its former name the U.S. National Indoor Pickleball Championships, was already a staple of the sport in the community, Kefi Pickleball owners David Tappe and Kate Tully brought pickleball to the streets of downtown Hot Springs with The Big Pickle event in September 2021.

Courts for pickleball keep popping up around town, and the sport is still picking up steam as summer quickly approaches for players in Hot Springs and central Arkansas.

Tappe said he recently met with the mayor of Maumelle about the city installing a pickleball program, and the company Vulcan Pickleball met with representatives in North Little Rock and other local areas to put in more courts.

"The industry is just exploding," Tully said. "We've talked about it being a wild West for a couple of years but you're getting two pro tours that are starting to get TV contracts. You have billionaires investing a lot of money. The play just gets faster and better it almost seems week to week."

Pickleball draws players in because competitors of all ages can find success in the sport, and it is fairly easy to learn.

"The game is still multigenerational," Tappe said. "You'll have people in their 80s and preteens playing."

The Spa City Classic returns to Bank OZK Arena from July 7 to July 10, and the tournament kicks off with the Offspring Open.

The Offspring Open fields mixed teams of grandparents, parents and children of all genders playing against each other for a bit of family fun to start the classic. That family fun can last throughout the year.

"You don't have to talk at Thanksgiving," Tully said. "You can just play pickleball."

Tully said the sport started in the 1960s, but the pandemic helped influence the growth of the game over the last couple of years

"The learning curve -- it's not too hard to learn," she said. "You can learn in five minutes enough to have a good time."

Another piece of the pickleball puzzle that influenced the sport's growth and continues to bring people back is the sense of camaraderie and community among players. Tappe said the community aspect of pickleball is "huge."

Participants at both the Spa City Classic and The Big Pickle in 2021 mingled, laughed and enjoyed their time together both on and off the court.

"It's what really caused the sport to skyrocket the way it did," Tappe said. "Just the fact it's a very inclusive sport. ... The camaraderie is just critical to not only creating the growth the sport has had but moving forward keeping that attitude. Keeping the spirit of inclusiveness is going to be important for us."

Tappe said pickleball players tend to be welcoming to new participants, and it is as simple as walking up to a group on a court and joining the action.

"You can go anywhere in the country and get on Facebook or call someone and be like, 'Hey, I'm just here for a couple days. Where's the play?' They'll mix you in," Tully said.

When pickleball first boomed in the Hot Springs area, one of the main challenges for players was finding courts. Now, more and more places to play are popping up around the area.

Silver Springs Country Club in Benton and Kanis Park in Little Rock are other areas in central Arkansas the pair highlighted as good places to play.

Hot Springs Health and Fitness near Uptown Hot Springs opened 10 new pickleball courts in the fall to try and meet the demand for the growing sport.

Hot Springs Health and Fitness General Manager Eric Wegner said pickleball grew tremendously in Hot Springs and although the center already had three courts inside, Wegner recognized a need in the community.

"We kind of listened to our members," Wegner said. "We got with local community, and we learned there's a need for outdoor courts as well. We built 10 outdoor courts here and since then our membership has grown tremendously."

Wegner added that pickleball has become one of the fastest-growing sports in the country.

"With that going on, we want to make sure that we try to become the pickleball kind of Mecca if you could say that within Hot Springs," Wegner said. "We really believe it's a thing for all ages. ... I think it kind of fits the genre we're in now. It's kind of a quick, fun, fast sport and it's also social too."

Each team fields two men and two women per level, and each win adds to the team's total. The final tournament of the ATP season, The ATP Cup, takes place June 4 at Hot Springs Health and Fitness.

The pair emphasized that players in Hot Springs can experience pickleball through tournaments, league play, outdoor festivals and through Pickleball Burn, one of Tully's creations. Pickleball Burn focuses on the cardio aspect of the sport.

The pair rebranded from IQ Pickleball to Kefi Pickleball to highlight the Greek word Kefi. Tappe said Kefi centers around passion and having fun, so the two owners are applying that philosophy to the game of pickleball.

IQ Pickleball still exists and now falls under the umbrella of Kefi Pickleball to illustrate the way the sport continues to grow.

"We have passion," Tappe said. "And we like to have fun."