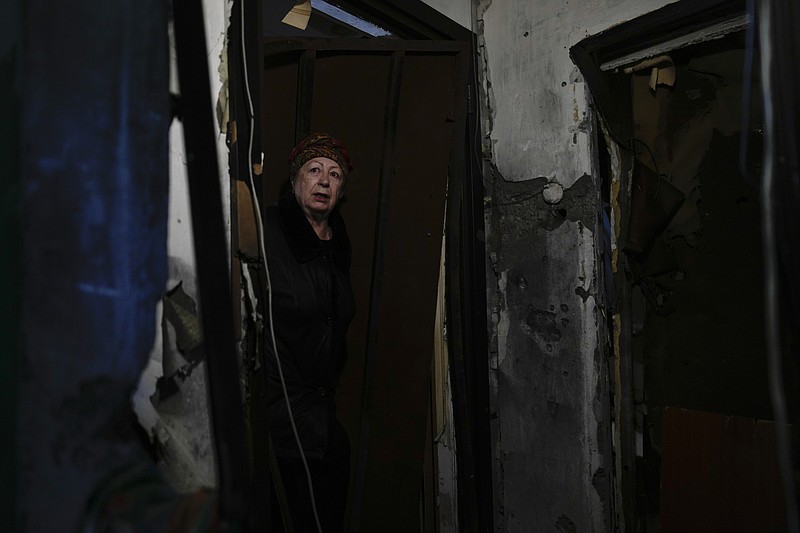 Klavdiya Tyshenko stands at the entrance of her home ruined by shelling in Irpin, outskirts of Kyiv, Ukraine, Tuesday, May 24, 2022. (AP Photo/Natacha Pisarenko)

KYIV, Ukraine -- Workers digging through the rubble of an apartment building in Mariupol found 200 bodies in the basement, Ukrainian authorities said Tuesday, as more horrors come to light in the ruined city that has seen some of the worst suffering of the 3-month-old war.

The bodies were decomposing and the stench hung over the neighborhood, said Petro Andryushchenko, an adviser to the mayor. He did not say when they were discovered, but the sheer number of victims makes it one of the deadliest known attacks of the war.

Heavy fighting, meanwhile, was reported in the Donbas, the eastern industrial heartland that Moscow's forces are intent on seizing. Russian troops took over an industrial town that hosts a thermal power station, and intensified efforts to encircle and capture Sievierodonetsk and other cities.

"The Russians are advancing in all directions at the same time. They brought over an insane number of fighters and equipment," the governor, Serhii Haidai, wrote on Telegram. "The invaders are killing our cities, destroying everything around." He added that Luhansk is becoming "like Mariupol."

Mariupol was relentlessly pounded during a nearly three-month siege that ended last week after some 2,500 Ukrainian fighters abandoned a steel plant where they had made their stand. Russian forces already held the rest of the city, where an estimated 100,000 people remain out a prewar population of 450,000, many of them trapped during the encirclement with little food, water, heat or electricity.

At least 21,000 people were killed in the siege, according to Ukrainian authorities, who have accused Russia of trying to cover up the horrors by bringing in mobile cremation equipment and by burying the dead in mass graves.

During the assault on Mariupol, Russian airstrikes hit a maternity hospital and a theater where civilians were taking shelter. An Associated Press investigation found that close to 600 people died in the theater attack, double the figure estimated by Ukrainian authorities.

Ukrainian President Volodymyr Zelenskyy accused the Russians of waging "total war" and seeking to inflict as much death and destruction as possible on his country.

"Indeed, there has not been such a war on the European continent for 77 years," Zelensky said, referring to end of World War II.

Moscow-backed separatists have fought Ukrainian forces in the Donbas for eight years and hold large swaths of territory. Sievierodonetsk and neighboring cities are the only part of the Donbas' Luhansk region still under Ukrainian government control.

Zelenskyy said Ukrainian forces in the region are facing a difficult situation.

"Practically the full might of the Russian army, whatever they have left, is being thrown at the offensive there," Zelenskyy said late Tuesday in his nightly address to the nation. "Liman, Popasna, Sievierodonetsk, Slaviansk -- the occupiers want to destroy everything there."

In the Donetsk region, Moscow's troops took over the industrial town of Svitlodarsk, which hosts a thermal power station and had a prewar population of about 11,000, and raised the Russian flag there.

"They have now hung their rag on the local administration building," Serhii Goshko, the head of the local Ukrainian military administration, told Ukraine's Vilny Radio, in a reference to the Russian flag. Goshko said armed units were patrolling Svitlodarsk's streets, checking residents' documents.

Russian troops also shelled the eastern city of Slovyansk with cluster munitions, hitting a private building, according to Mayor Vadym Lyakh. He said casualties were avoided because many people had already left their homes, and he urged the remaining residents to evacuate west.

Heavy fighting was also underway in the city of Lyman.

Amid the fighting, two top Russian officials appeared to acknowledge that Moscow's advance has been slower than expected, though they vowed the offensive would achieve its goals.

Nikolai Patrushev, secretary of Russia's Security Council. said the Russian government "is not chasing deadlines." And Defense Minister Sergei Shoigu told a meeting of a Russia-led security alliance of former Soviet states that Moscow is deliberately slowing down its offensive to allow residents of encircled cities to evacuate -- though forces have repeatedly hit civilian targets.

"Well, after three months of searching for an explanation for why they were unable to break Ukraine in three days, they couldn't think of anything better than to say that's what they planned," he said in his video address.

Russian officials also announced that Moscow's forces had finished clearing mines from the waters off Mariupol and that a safe corridor will open Wednesday for the exit of as many as 70 foreign ships from Ukraine's southern coast.

In Kharkiv, Ukraine's second-largest city, there were signs of recovery after weeks of bombardment. Residents formed long lines to receive rations of flour, pasta, sugar and others staples this week. Moscow's forces withdrew from around Kharkiv earlier this month, pulling back toward the Russian border in the face of Ukrainian counterattacks, though Russia continues to shell the area from afar, Ukrainian officials said Tuesday.

Galina Kolembed, the aid distribution center coordinator, said that more and more people are returning to the city. Kolembed said the center is providing food to over 1,000 people every day, a number that keeps growing.

"Many of them have small kids, and they spend their money on the kids, so they need some support with food," she said.

Meanwhile, the wife of the top commander who held out inside the Azovstal steel mill in Mariupol said Tuesday that she had a brief telephone conversation with her husband, who surrendered to the Russians and was taken prisoner last week.

Kateryna Prokopenko, who is married to Azov Regiment leader Denys Prokopenko, said the call broke off before he could say anything about himself.

She said the call was made possible under an agreement between Ukraine and Russia, mediated by the Red Cross.

Prokopenko and Yuliia Fedosiuk, the wife of another soldier, said several families received calls in the past two days. The women said they are hopeful the soldiers will not be tortured and will eventually "come back home."

Denis Pushilin, the leader of the Moscow-backed separatists in the Donetsk region, told the Russian Interfax agency that preparations are underway for a trial of captured Ukrainian soldiers, including the Mariupol defenders. 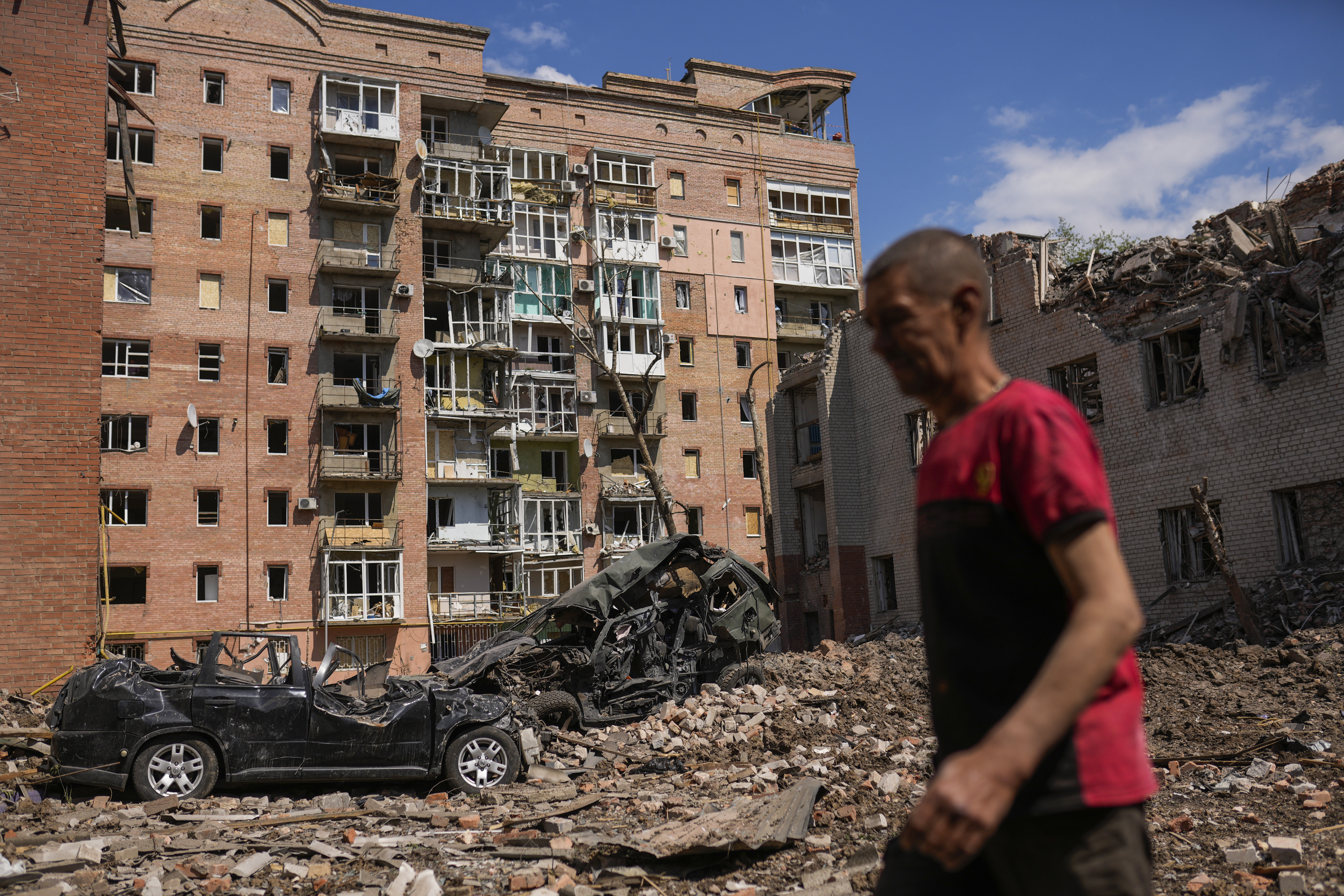 A man walks next to heavily damaged buildings and destroyed cars destroyed in a Russian bombing in Bakhmut, eastern Ukraine, Tuesday, May 24, 2022. The town of Bakhmut has been coming under increasing artillery strikes, particularly over the last week, as Russian forces try to press forward to encircle the city of Sieverodonetsk to the northeast. (AP Photo/Francisco Seco) 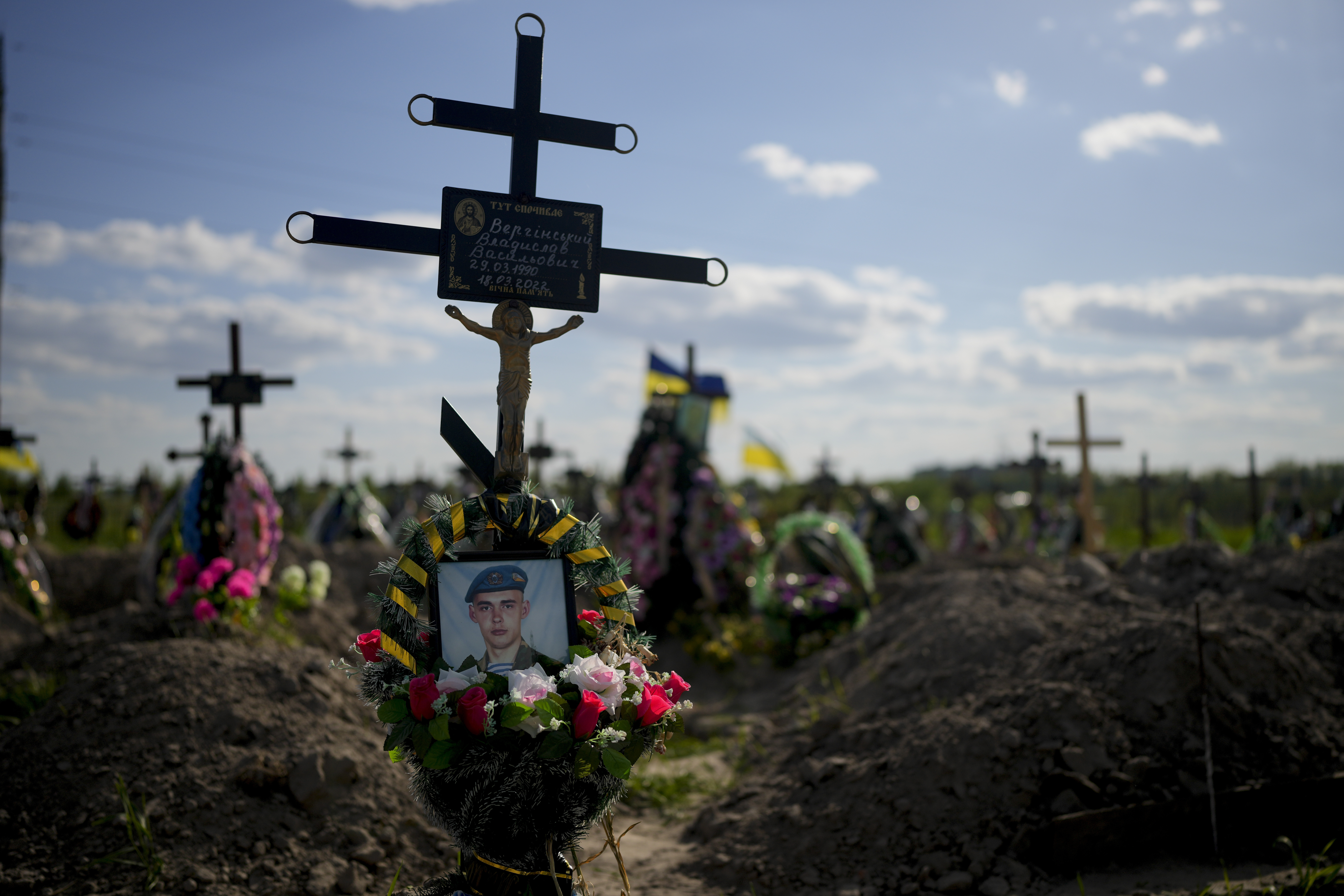 The tomb of a person who died after Russia invasion is seen in Bucha cemetery, outskirts of Kyiv, Ukraine, Tuesday, May 24, 2022. (AP Photo/Natacha Pisarenko) 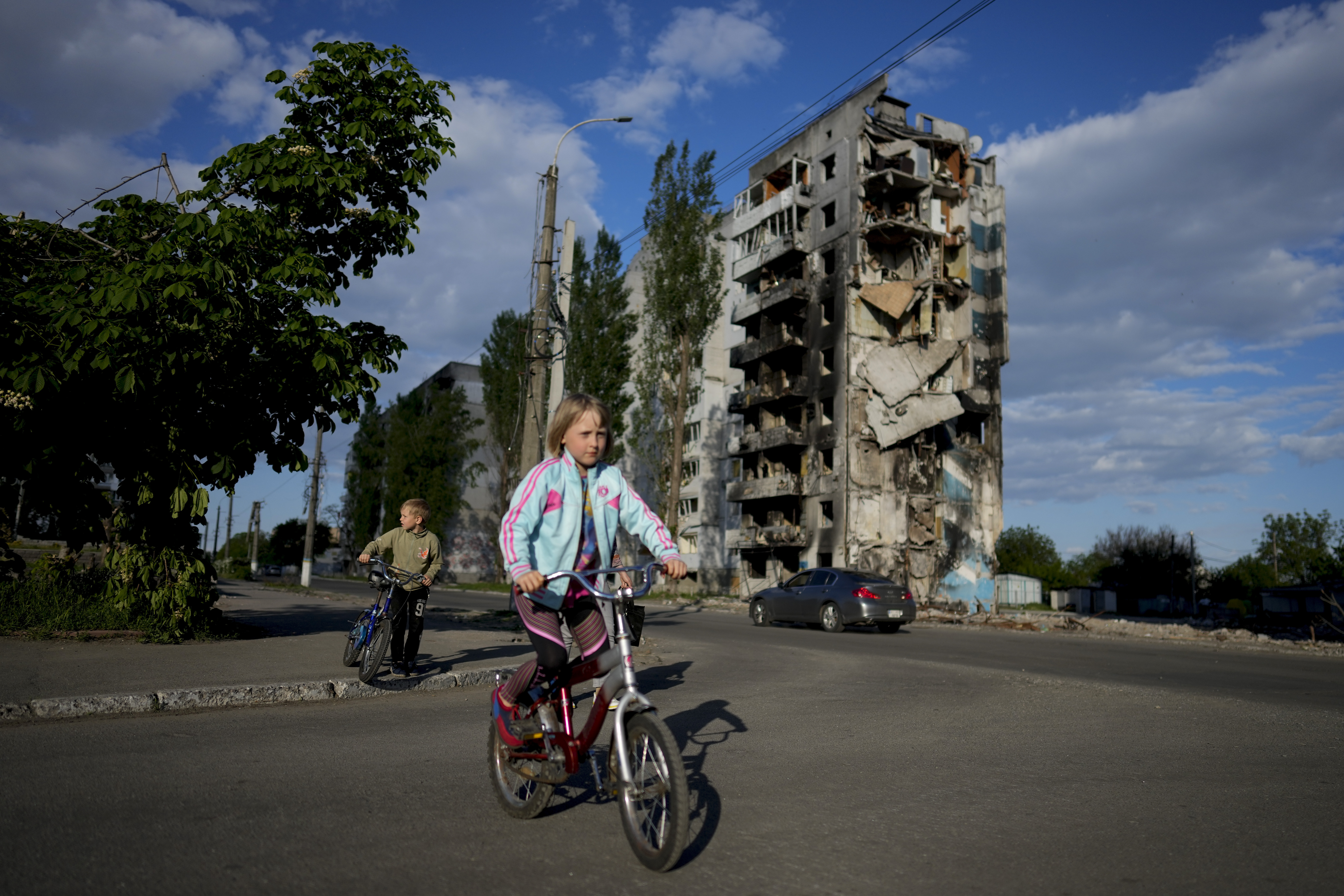 A girl rides a bicycle in front of houses ruined by shelling in Borodyanka, Ukraine, Tuesday, May 24, 2022. (AP Photo/Natacha Pisarenko) 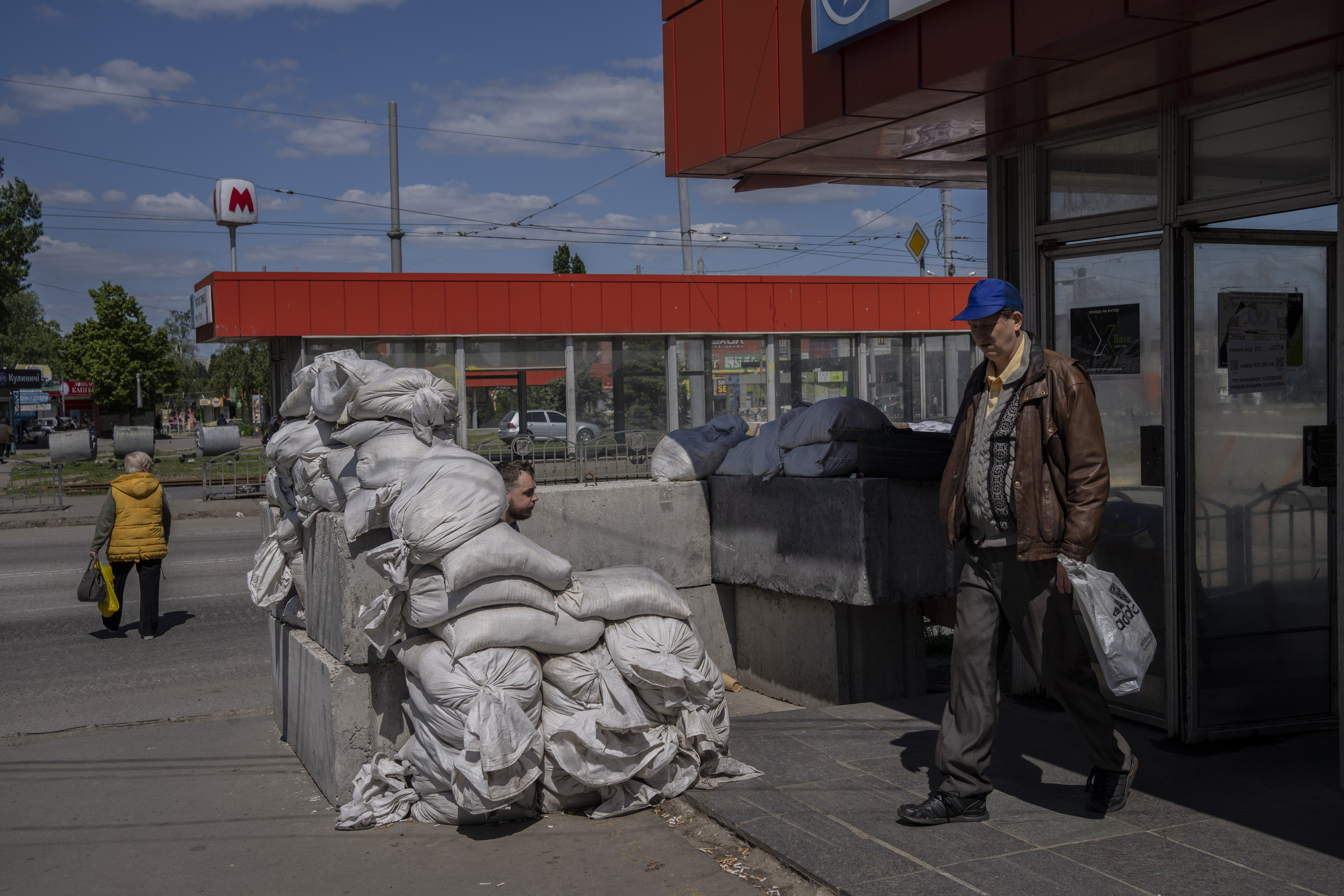 A man walks out of the subway in Kharkiv, eastern Ukraine, Tuesday, May 24, 2022. Kharkiv subway resumed service on Tuesday morning after it was closed for more than two months during Russian attempt to capture the city. (AP Photo/Bernat Armangue) 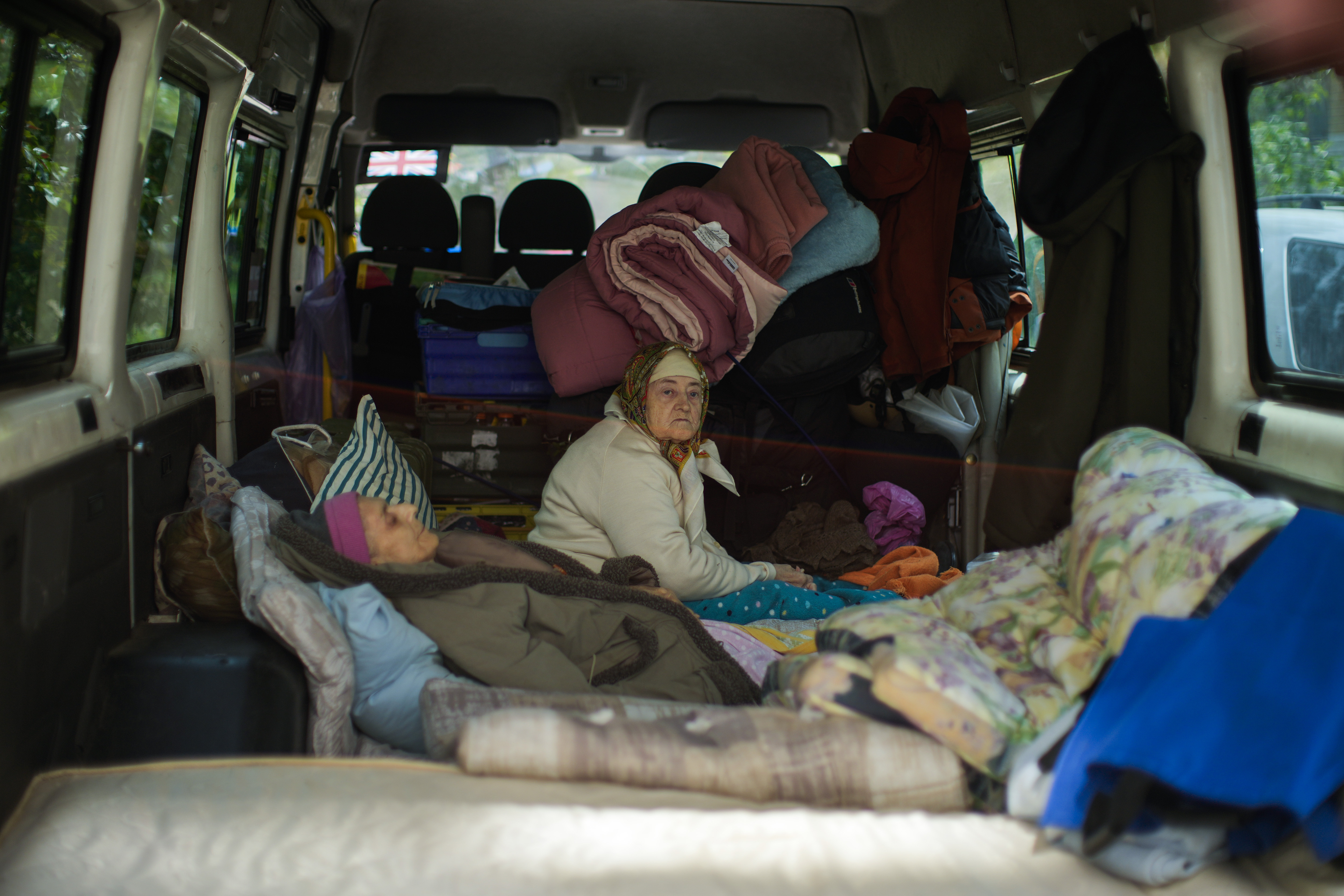 Two women sit inside a van as they are evacuated in Bakhmut, eastern Ukraine, Tuesday, May 24, 2022. The town of Bakhmut has been coming under increasing artillery strikes, particularly over the last week, as Russian forces try to press forward to encircle the city of Sieverodonetsk to the northeast. (AP Photo/Francisco Seco) 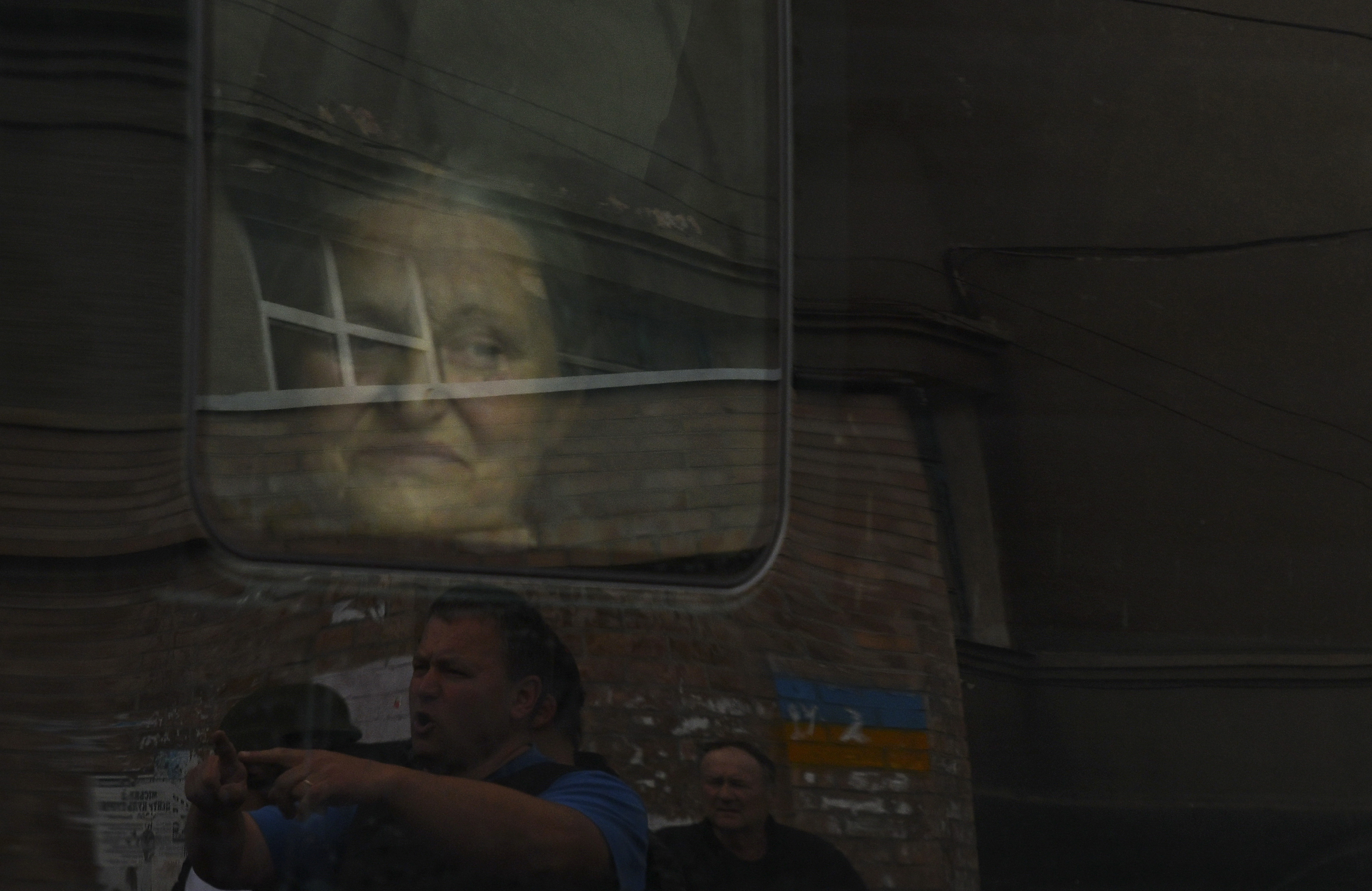 An elderly Ukrainian woman sits in the bus during an evacuation of civilians in Soledar, Donetsk region, Ukraine, Tuesday, May 24, 2022. (AP Photo/Andriy Andriyenko) 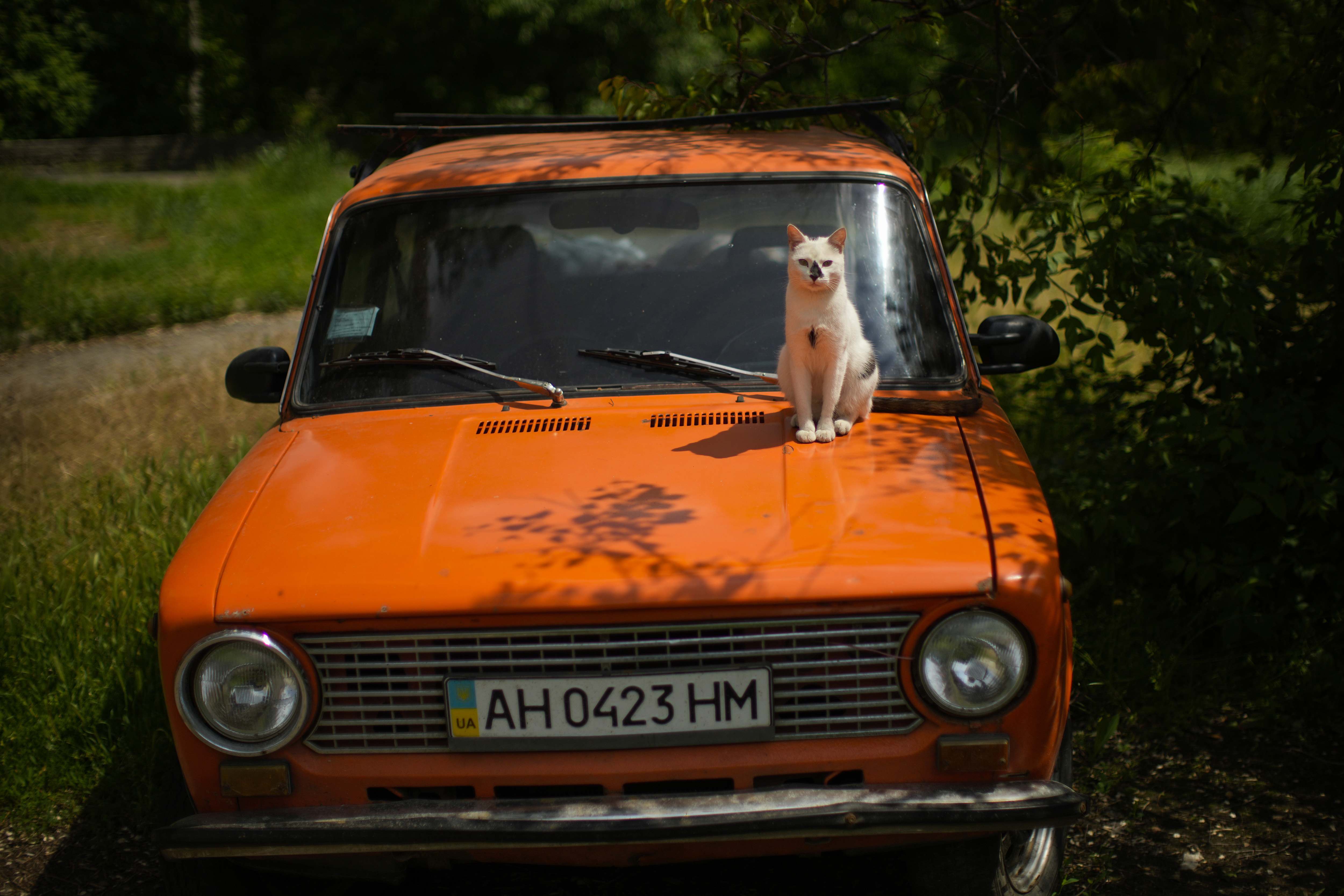 A cat sits on a car in a public park in Bakhmut, eastern Ukraine, Tuesday, May 24, 2022. The town of Bakhmut has been coming under increasing artillery strikes, particularly over the last week, as Russian forces try to press forward to encircle the city of Sieverodonetsk to the northeast. (AP Photo/Francisco Seco) 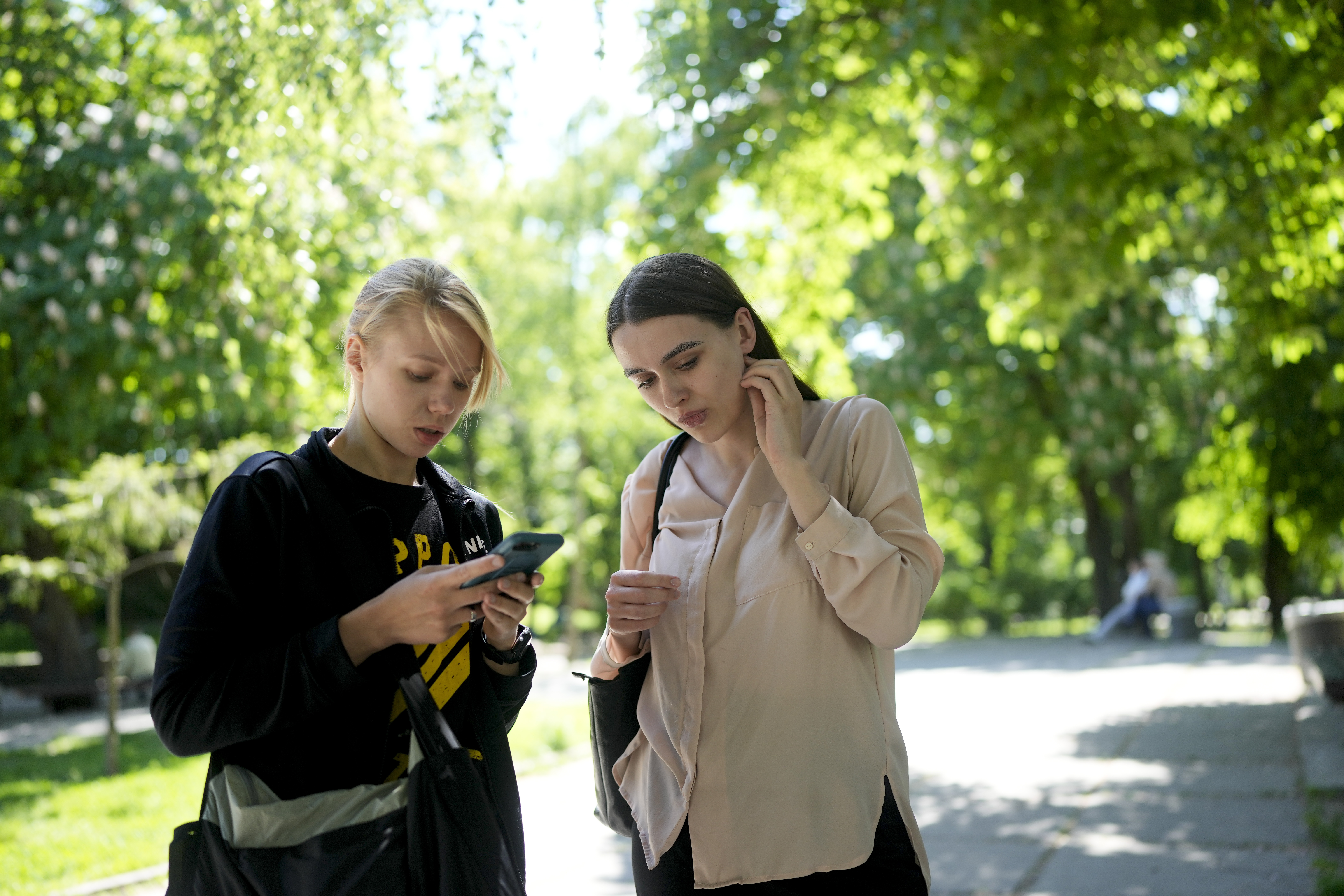 Kateryna Prokopenko, left, wife of Ukrainian commander of the Azov regiment that led the defense of Mariupol, Denys Prokopenko, and Yulia Fedosiuk, wife of Sgt. Arseniy Fedosiuk, talk prior to an interview with The Associated Press in Kyiv, Ukraine, Tuesday, May 24, 2022. Prokopenko and Fedosiuk are among Ukrainian fighters that surrendered to Russian forces in Azovstal steel mill in Mariupol.(AP Photo/Natacha Pisarenko) 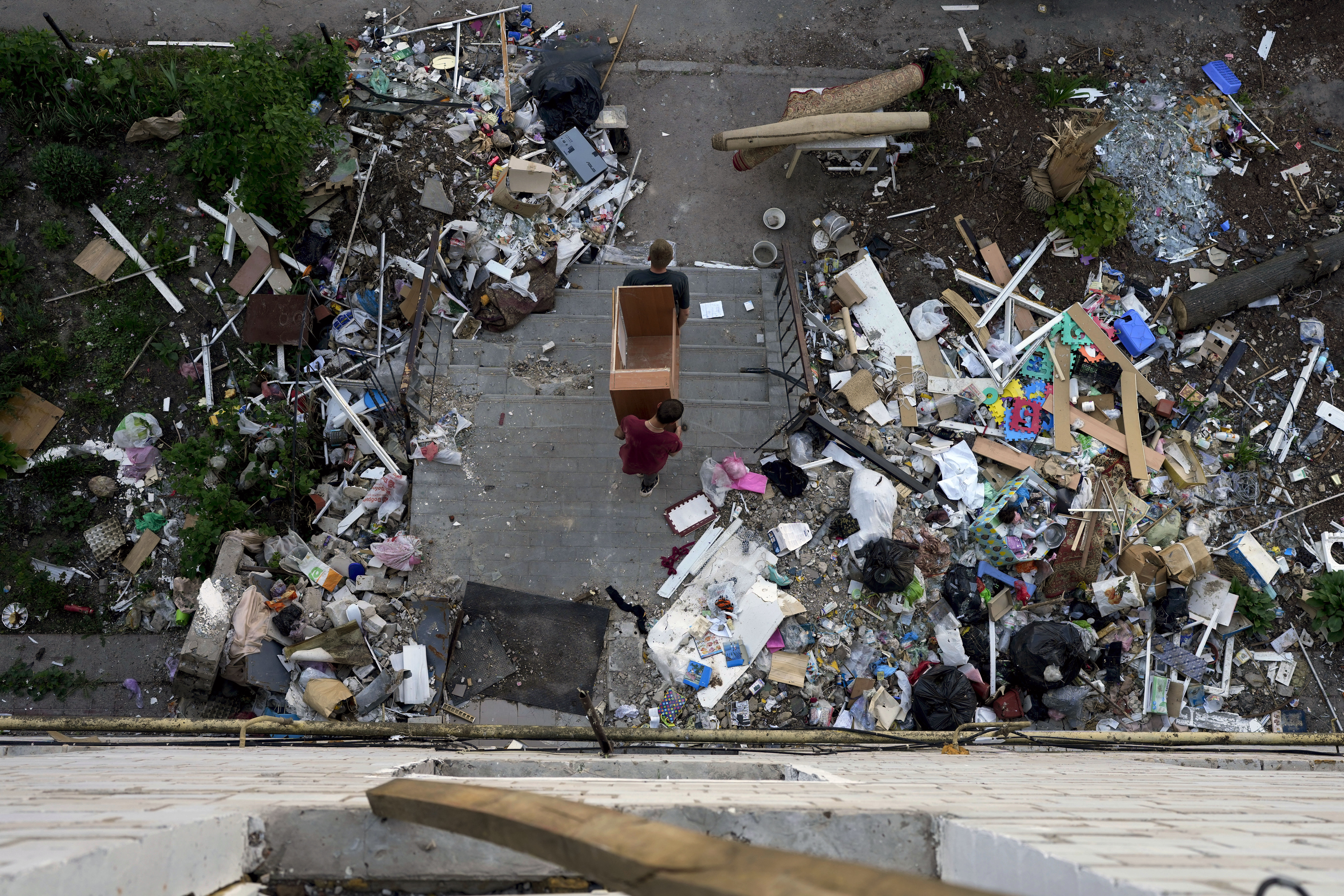