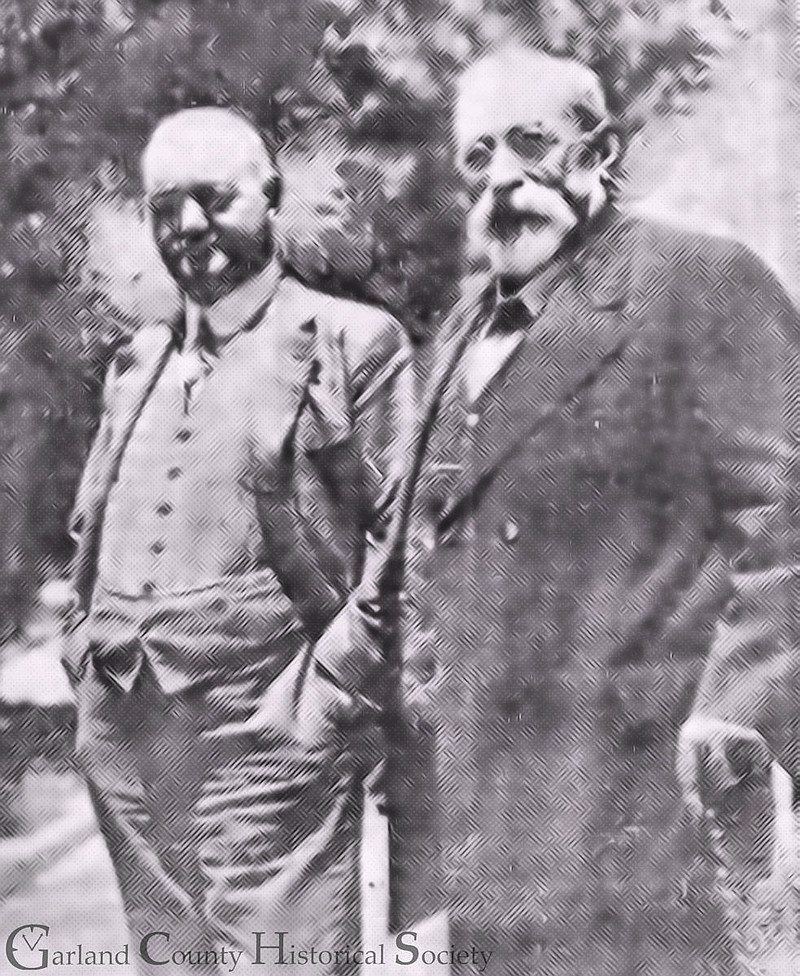 Bat Masterson, left, and George Littlefield at their reunion in Hot Springs, 1919. - Photo courtesy of the Garland County Historical Society

Masterson first came here in August 1878. He traveled from Dodge City to the resort city for rest and medical treatment, returning to his job as sheriff of Ford County, Kansas, in October. Eventually, he lived all over the country — from Colorado to Arizona to New York, but he kept coming back to Hot Springs.

In 1898, a Denver paper quoted “the celebrated Bat Masterson, who has been spending the winter at Hot Springs, Arkansas” as saying, “It costs money to live in Hot Springs. ... But the winters are delightful, and the number of people who sojourn there simply for the climate is annually growing.” He spent so much time here that in 1901 a paper reported that he was a “full-fledged citizen” of the town and would settle here permanently. This never happened, but he continued to visit often, sometimes refereeing boxing matches at Whittington Park.

Working for the New York Morning Telegraph, from 1904 or 1905 until his death in 1921, Masterson and his wife spent a month or more here every year in the late winter or early spring. He found material for his column as he enjoyed the thermal baths or the racing at Essex and Oaklawn Parks. He loved the plush gambling clubs like the Ohio, Kentucky, and Arkansaw, once winning $10,000 in a five-hour faro game at the Southern Club. He was disappointed when reformers banned illegal gambling in 1913, saying that the shutdown left the town “groggy and hanging on the ropes, waiting for the count.” He grumbled, “The only thing the town will have left before long will be the hot water and it’s just possible that someone will try and stop that from running.”

But Masterson always loved Hot Springs — giving generously to the town after a devastating fire and making local friends. He also enjoyed seeing old friends who traveled here, like William Pinkerton, head of the Pinkerton Detective Agency. A special reunion occurred in 1919 when a friend from Dodge City days, Texas cattleman George Littlefield, discovered he and Masterson were both staying at the Arlington Hotel. Masterson told a reporter, “No outfit was organized for a quicker fight, carried better Winchesters, were surer shots and equal to any emergency than Littlefield’s men. When that bunch hit Dodge there was something doing. The old town knew they were there.”

Littlefield said, “Masterson was a wild youngster in those days, but square, every inch of him. It didn’t make any difference how many ‘bad men’ there were in Dodge, he made them realize while he was in office that he was sheriff every minute of the time.”

Much more about Masterson’s time in Hot Springs, as well as the story of Wyatt Earp’s Hot Springs connections, are in an article by Donny Kilgore in the 2015 issue of the historical society’s yearly journal, The Record. The Record is available at the society archives at 328 Quapaw 501-321-2159 and at garlandcountyhistoricalsociety.com.