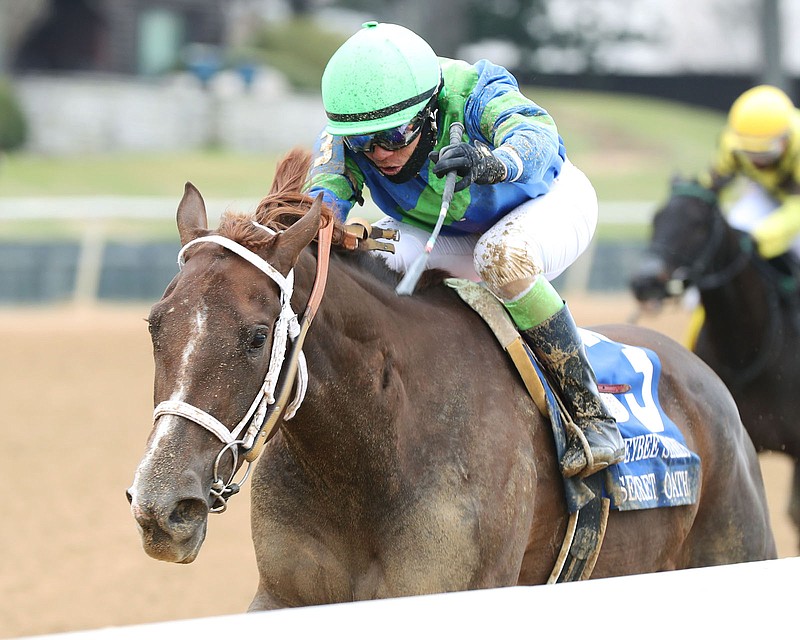 For all the promise of winter and spring, Secret Oath's 3-year-old season veered off track. Cite the competition -- she ran in some big races, gaining minor rewards -- instead of an injury.

In other words, Oaklawn's unofficial horse of the 2021-22 racing season in Hot Springs will not be national Horse of the Year. Her last bid to become 3-year-old filly champion comes at high odds (on or off the tote board) in Saturday's $2 million Grade 1 Breeders' Cup Distaff at Keeneland Race Course in central Kentucky.

Secret Oath has not won since the G1 Kentucky Derby in early May at Louisville's Churchill Downs. Trainer Wayne Lukas' homebred daughter of the late Arrogate has since battled against top stars in a season that she twice faced males.

A one-two finish for Hall of Fame trainer Todd Pletcher is projected in the Distaff. Next, the 9-5 program favorite, is the presumptive choice to win the 3-year-old filly title with 4-year-old reigning champion Malathaat 3-1 second choice on the morning line.

Malathaat drew the rail post and Nest No. 6 at Monday's postposition draw, eight entering the nine-furlong race. Secret Oath is 15-1 from post three with Luis Saez aboard. Both Pletcher stars come off graded success, Malathaat (John Velazquez) in the G1 Spinster at Keeneland and Nest (Irad Ortiz Jr.) in the Grade 2 Beldame at Belmont Park. With eight G1 victories between them, the Pletcher pair are sired by Curlin, Horse of the Year in 2007 (when he won the Arkansas Derby and BC Classic) and 2008 for trainer Steve Asmussen.

Secret Oath won the G3 Honeybee and listed Marsha Washington this past Oaklawn season after taking a contentious allowance victory on Dec. 31 in her final start at 2. She gave Lukas, since turned 87, another Classic victory in the Oaks with Nest second. Owned by Kentucky breeders Robert and Stacy Mitchell, she has campaigned solely against 3-year-olds after a fourth-place run against males in the G1 Preakness.