Would Nutt and Auburn hit it off well? 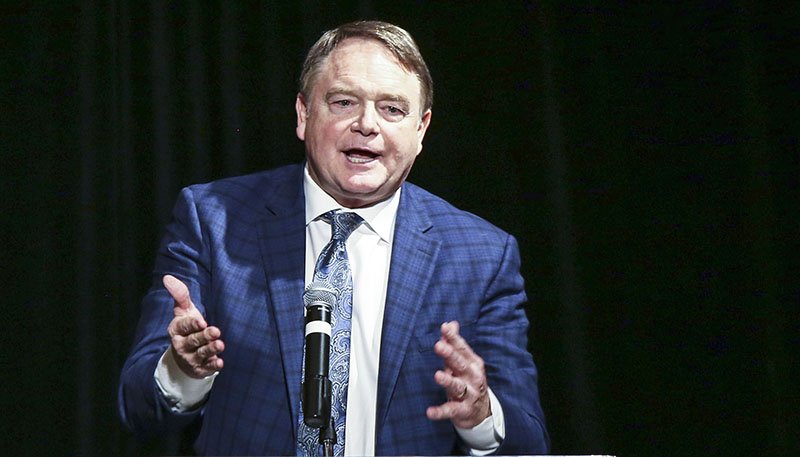 Houston Dale Nutt's name came up when the news Monday about Bryan Harsin at Auburn came down. Even if only among casual football fans, did anyone think it would not?

Auburn, after all, would put the former Arkansas and Ole Miss coach closer to a career grand tour of Southeastern Conference Western Division schools. That would leave only four spots for Nutt to dip a toe. Hmm, Jimbo Fisher is on shaky ground at Texas A&M, is he not? Not that Nick Saban, who turned 71 on Halloween, will ever leave Alabama.

Meaning no ill will toward Nutt, a good coach with a track record of winning, but the odds that he will ever coach at Alabama rival those of Arkansas building a statue outside Reynolds Razorback Stadium for Chad Morris.

Nutt is 65, born in October 1957, the year of the Little Rock Central integration crisis in which a lame-duck United States president immersed himself. Nutt later quarterbacked Central, also playing some basketball, and served as backup freshman QB for the last Razorback team coached by Frank Broyles.

Making some noise as Boise State coach, Nutt came home to Arkansas in the same position in late 1997. Athletic Director Broyles, who had just fired Danny Ford (as he had Jack Crowe), hired Nutt against the advice of media insider Orville Henry, who cautioned in print that any challenges Nutt faced in Idaho would be tame compared with those one on a daily basis in the Southeastern Conference. Broyles is since deceased, leaving the UA sports empire he built in the unsteady hands of Jeff Long, who presided over some of the silliest years in its athletic history.

Reports aired the day of Nutt's hiring at Arkansas that the new coach would be Tommy Tuberville, Henry's choice, a home-state product with the required SEC experience at Ole Miss. If the truth be told, Tuberville might have priced himself out of the Razorback job, one former UA player on the search committee said to be chagrined at what he saw as a power play by Tuberville.

In the crazy world of SEC football, Tommy Bowden left Auburn early in the 1998 season; the Tigers, even then with itchy fingers regarding coaches, turned to Tuberville, who beat Alabama six years in a row but was feeling heat when he left the school. Ole Miss fans, resistant to change in nearly all ways -- a quorum needed to replace a light bulb, it is said, with one guy left to praise the old bulb -- came to regard Tuberville as "That Lyin' Tub."

Nutt found safe harbor -- not to mention a nice severance -- at Ole Miss when Jeff Long freed the coach from what the AD called "golden handcuffs" after the 2007 season, Nutt's 10th at Arkansas. Nutt, for all his rah-rah stuff, coached pretty well. Know of any other coaches who changed jobs after beating the nation's No. 1 team? (LSU, the future 2007 Bowl Championship winner, in triple overtime at Baton Rouge).

Nutt got Ole Miss moving but could not produce the school's first SEC championship in football since Johnny Vaught's 1963 squad, which lost the Sugar Bowl to an Alabama team without a suspended Joe Namath. The Rebels can scale that Matterhorn starting with a strong November against Alabama, Arkansas (Nov. 19 in Fayetteville) and Mississippi State.

As the game with Ole Miss approaches, we're sure to rehash the circumstances under which coach Lane Kiffin wound up in Oxford after exploring the opening at Arkansas soon to be filled by Sam Pittman, with whom Arkansas fans are well pleased. Hugh Freeze, whose Ole Miss teams beat Alabama in back-to-back years but could not collect an SEC title, brings his newly ranked Liberty squad to Fayetteville on Saturday.

Nutt, linked with more jobs, someone wrote, that he was never in contention for than anyone out there, does studio work for CBS Sports Network, occasionally commenting on an Arkansas game. Turning 67 on the eve of Arkansas' win at Brigham Young, married with four children, Nutt may be content out of coaching. For a younger man with less baggage than Nutt, Auburn might be just the ticket.

Auburn fired Harsin two days after a 41-27 beatdown by Arkansas at Jordan-Hare Stadium. He looks ahead while the man he replaced, the fired Gus Malzahn, has his Central Florida team back in the polls. Harsin and Malzahn formerly coached Arkansas State, which is struggling under former Tennessee man Butch Jones.

If Houston Nutt to Auburn sounds far out, imagine Nutt coaching the Arkansas State team that in 2025 plays Arkansas at War Memorial Stadium, where he played at Central and for the Razorbacks. Then again, Central is on the skids in football and, like Pulaski Academy with Nutt-era wide receiver Anthony Lucas, might turn to a former Razorback, if for no other reason than name value.

Print Headline: Would Nutt and Auburn hit it off well?