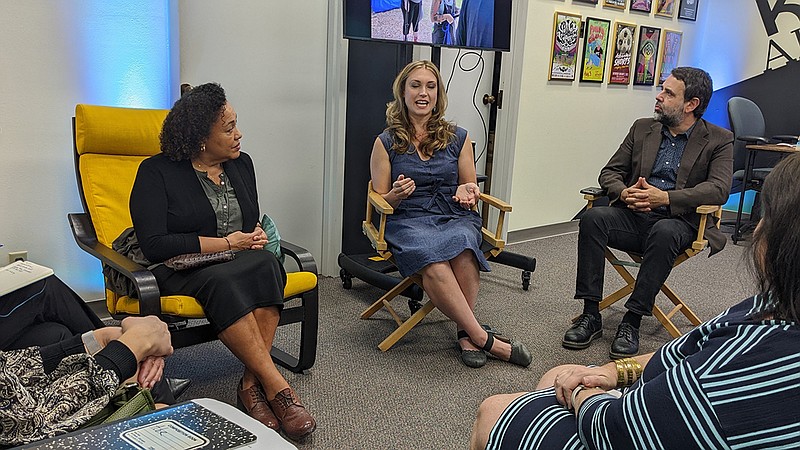 Maria Rosario Jackson, the chair of the National Endowment for the Arts, based in Washington D.C., visited Arkansas Thursday and Friday, stopping by Low Key Arts' new digital arts studio on Friday morning.

Jackson was filled in on the new program Low Key Arts is focusing on: Inception to Projection, a year-round film school on track to producing 100 films a year, according to Low Key Arts' Facebook page. Jen Gerber, the organization's film program director and Sonny Kay, the executive director, spent Friday morning telling Jackson about the organization and the program.

"This morning's conversation has been so inspiring," Jackson said. "It's wonderful to know that there's so much art-making happening here in Hot Springs. And the different ways. So we talked about music, we talked about filmmaking, we talked about building community, the challenges over the last two or three years and not just what was hard, but what was possible. So, that's been fantastic."

Low key Arts received a grant from a program called Arts Engagement in American Communities through the NEA around two years ago, Kay said.

"Those allowed us to ride out COVID and basically regroup and restructure and change the way we do some things, not everything, but some things particularly with our educational programs," he said.

"It was the first stage in us beginning to amass this artillery of computers. It enabled us to buy the first two or three computers and some other film equipment that was required at the time, and it kind of jump-started the phase we're in now.

"In the past year, we've had some serious support from local Arkansas foundations who have taken note of what we're doing, but certainly the NEA's support was the vote of confidence that I think helped us establish ourselves once and for all as a real serious option when it comes to this kind of education here."

Jackson's visit to Arkansas was mainly in celebration of the NEA's partner organization, Mid-America Arts Alliance's 50th anniversary celebrated in Hot Springs earlier this week, but Kay said he felt like her visit taking place at the same time as Low Key's Arts' opening of the new digital arts studio felt "surreal."

"It feels very symbolic," he said. "It's certainly just a coincidence, but it's a very exciting coincidence and it feels as though the stars are aligning for us in a sense, which is great."

"We're having some of the recent students here as sort of ambassadors for the program," Kay said Friday morning. "They'll be hopefully engaging attendees and getting them excited about the possibility of perhaps them taking the program themselves."

"One of the things we talked about this morning is how important it is for people to be able to tell their stories," Jackson said. "And I certainly believe that part of (a) place where people can thrive and reach their full potential includes mechanisms that allow people to tell their stories on their own terms, and this is a beautiful example of that."