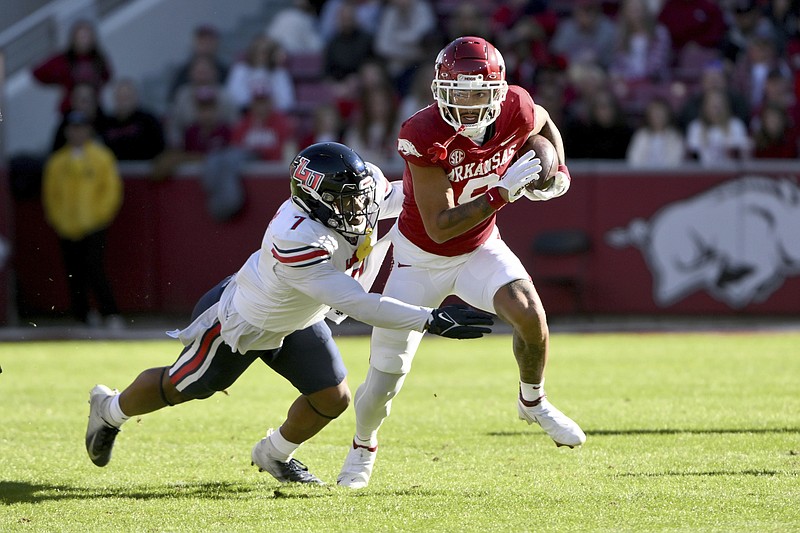 Arkansas wide receiver Jadon Haselwood, right, is tackled by Liberty linebacker Mike Smith Jr. (7) during the first half Saturday in Fayetteville. - Photo by Michael Woods of The Associated Press

Call me Nostrodamus, even a chipmunk journalist, but not everyone was surprised by Liberty University's performance Saturday in Fayetteville.

This does not include, of course, the Arkansas Razorbacks, who went down 21-19 in perhaps the weakest performance by a Sam Pittman-coached team.

Liberty recognized it as an opportunity to strut its stuff before a Southeastern Conference team. Representing the Virginia school associated with the late TV evangelist Jerry Falwell, the Flames scored their first victory over an SEC opponent, keeping the Razorbacks out of the end zone until 7:42 in the fourth quarter.

Critically, the Hogs were denied entrance when KJ Jefferson kept on a two-point conversion attempt with 1:11 left. Jefferson, who caught heat when he flung himself at the goal line on a fumble that Texas A&M turned into a scoop-and-score touchdown in September, was stopped inside the 1-yard line when grabbed low after taking the snap in the shotgun formation.

Jefferson thus failed to atone completely for the first two-interception game of his career after he was not expected to play. The quarterback's recurring shoulder injury has made him a game-day decision for the coaching staff, backup QB Malik Hornsby taking most of the snaps in practice.

With a 5-4 record after starting 3-0, and having Alabama on the ropes for a spell in the fifth week, these Razorbacks are a puzzle. That they have shortcomings requires only a film study, and opposing teams are lapping it up. An SEC top-tier squad they are not, and nowhere near the monolithic team some billed them in September. They are just another former top-10 team (Oklahoma and Oklahoma State also are in that mix) that has lost its way.

Pittman shouldered the blame for his team's poor performance, one that found them down 21-3 after three first-half touchdown passes by one Johnathan Bennett, whose name appears on no Heisman Trophy checklist that I can find. An offensive-line coach at previous stops, Pittman had to wince at Liberty recording 14 tackles for a loss. The Hogs' vaunted running game averaged 3.4 yards on 144 net rushing after deducting 59 in losses.

This might not do it against an SEC bottom-feeder and certainly not against an 8-1 team (after Saturday) on a mission.

Linebacker Bumper Pool, who leads by example, added, "We just didn't come out of the gates hot. It's frustrating to start slow like we have been."

Singer Peggy Lee might have asked of Arkansas, "Is this all there is?", after the first Razorback home game in five weeks.

Fans are concerned that this represented more than a rough start and bumpy landing for the Hogs. With Pittman catching flak on social media to a high degree, some wondered if the coach and his staff have lost the team. With LSU and Ole Miss coming to Fayetteville and a tricky road trip against Missouri left, this is a precarious time to ask whether one's team can find a second wind.

They would settle for answers to two questions: Why, after nine games, has a second-team quarterback not emerged? And why has a go-to receiver, perhaps not another Treylon Burks but a reasonable facsimile, not been found?

Arkansas was so lifeless Saturday that a former media member posted whether a member of the opposing team could receive the Crip Hall Award (most valuable UA senior in the homecoming game).

Another likened Pittman to Mike Anderson, a former UA coach in another sport whom critics came to say could only get the Razorbacks so far.

These are tough questions to ask of a decent man who accepted a job for which there were few takers and, in the whole, rated a thumbs-up performance for the first 25-or-so Arkansas games.

Four losses in six games are enough to test anyone's faith. Do not expect Brian Kelly (LSU, 11 a.m. Saturday) or Lane Kiffin (Ole Miss) to extend an olive branch. Too late in the season, too much at stake (SEC championship-game appearance, bowls) for that.