Tigers ‘geaux’ to Ozarks with head of steam 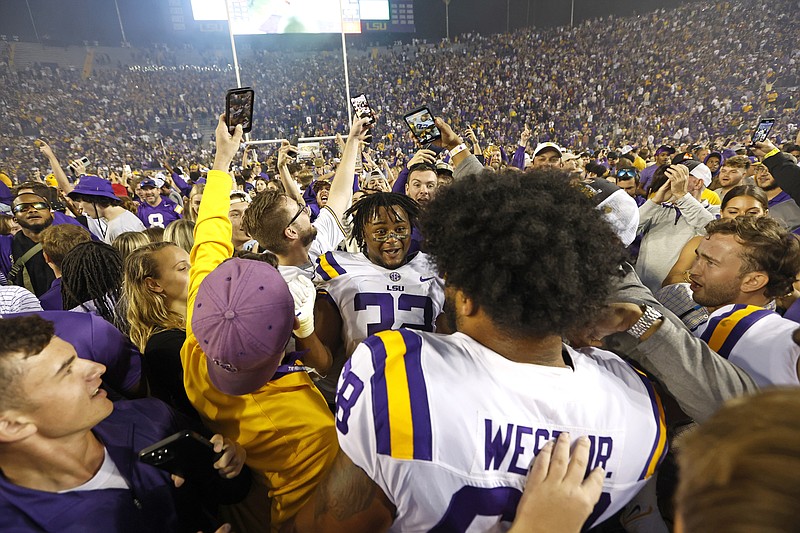 LSU offensive lineman Fitzgerald West Jr. (68) and linebacker DeMario Tolan (32) celebrate with fans who stormed the field after a game against Alabama Saturday in Baton Rouge, La. - Photo by Tyler Kaufman of The Associated Press

One by one, I am subtracting names from a list of football fans to be congratulated, those known to be hopelessly devoted, as Olivia Newton-John might say, to the LSU Tigers.

My superstitious respect for the University of Alabama perhaps known to readers, it would be nice to chat with people who have savored a recent win over the Crimson Tide. That rules out Razorback Nation, which last enjoyed such a moment in 2006 (George W. Bush was in the White House, Houston Nutt on the Arkansas sideline).

The game ending too late Saturday night for many calls, I started with a friend who lives across the street. To him, it was a glorious sweep by LSU, long his favorite team, and Notre Dame, which a son attends (the Irish thumping Clemson). That LSU did it with a former Notre Dame coach only spiced the conversation.

A friend at church from Spring Hill, Louisiana, near the state line, pledging allegiance both to Arkansas and LSU remains to be called. A childhood friend from Glenwood now deeply entrenched in Louisiana was called twice -- first with the Tigers leading by three before the Crimson Tide nailed a tying field goal to force overtime. A congratulatory call followed LSU's 32-31 victory, highlighted by coach Brian Kelly's gutsy dice roll on a two-point conversion at game's end.

"I've been waiting for your call," she said near the two-minute mark of the fourth quarter. Her response later sounded like a primal scream. (Incidentally, her younger sister, a Georgia fan, was contacted before the Bulldogs took down Tennessee. Tuning on habit to CBS, I asked the latter, "It's 2:30 on Saturday afternoon. This is when Alabama usually plays, and they're not on." The Baton Rouge affair, a Death Valley classic, needed only the sun to disappear into the western sky, as Tiger Stadium PA man Dan Borne' instructs the crowd in late afternoon.)

All they might have needed Saturday night was longtime LSU broadcaster John Ferguson describing the action as the clock inched toward "10 o'clock Central." For certain, the home fans yelled themselves hoarse with "Geaux, Tigers" admonitions after each LSU first down.

It has been this way pretty much in Bayou country since Huey Pierce Long, governor and later senator of the great state (some would say aspiring American dictator), came to see Tigers football as personal property, before gunned down at the state Capitol in 1935. Pulitzer Prize-winning novel "All the King's Men," by Robert Penn Warren, is fictionally set in Louisiana with Willie Stark portraying Long. A 2006 remake of the 1949 Oscar-winning Best Picture, Sean Penn replacing Broderick Crawford as Stark (also assassinated at the Capitol), removes doubt.

Since LSU people become irrational when things are not going right with the Tigers, coaching the team can be both a rewarding and upsetting experience. What other school fires two recent national title-winning coaches, as LSU did with Les Miles and Ed Orgeron? Kelly, for his credit, is off to a better start than another Notre Dame man (Gerry DiNardo) who coached the Tigers.

With consecutive wins over Ole Miss and Alabama at Tiger Stadium, Kelly's team has achieved a No. 7 national ranking (No. 8 in another) before it plays Arkansas at 11 a.m. Saturday in Fayetteville. Its only remaining SEC game after Saturday is at Texas A&M, which like the sun on game night in Baton Rouge is disappearing into the western sky.

Arkansas, which had lofty dreams in September when 3-0, plunged to 5-4 with Saturday's shocking home loss to Liberty. The Razorbacks, with Ole Miss coming in next week, may need to beat Missouri in the final game to reach six victories and become bowl eligible.

For the first time in his three years as Arkansas coach, Sam Pittman is becoming an issue with some Razorback fans. Some more even-keeled fans would settle for staff changes and, as ever, an improved defense, this one unable to force turnovers, which a typically over-achieving Arkansas squad requires.

Jayden Daniels, late of Arizona State, is doing things at quarterback for LSU that fans came to expect of Arkansas' KJ Jefferson. With an aching shoulder that made him questionable to play against Liberty, Jefferson threw two interceptions and was stopped short of the goal on an attempt for a tying two-point conversion. The Hugh Freeze-coached Flames bottled up running back Rocket Sanders and with Arkansas playing in lackluster style, that was that.

LSU is an early 3-point favorite over Arkansas. The Hogs are almost guaranteed to play more inspired football than against Liberty, but this team is treading water and LSU, frankly, looks better.

The Tigers, then coached by Orgeron, won on their last Fayetteville trip in 2020. With Daniels quarterbacking, this is a better team than beat Arkansas that day. Brace yourself, fans, for a 5-5 record after Saturday.

Print Headline: Tigers ‘geaux’ to Ozarks with head of steam