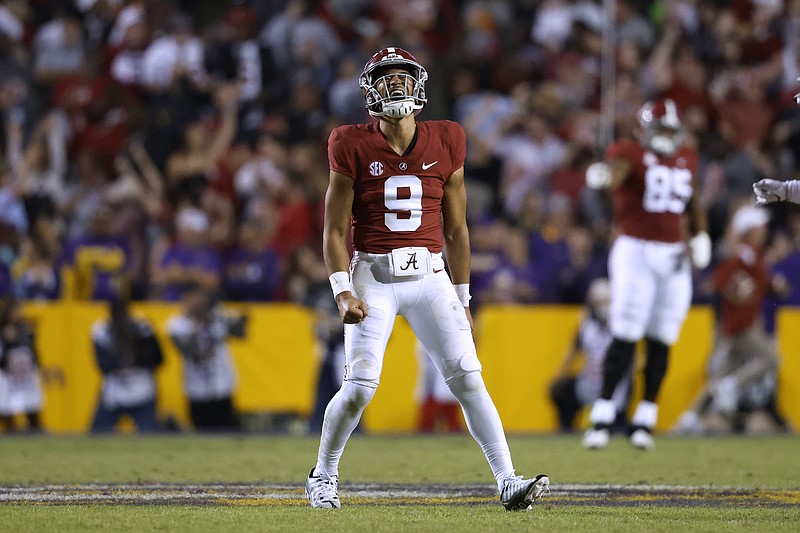 Alabama quarterback Bryce Young (9) celebrates after throwing a pass for a touchdown during the second half against LSU in Baton Rouge, La., Saturday. LSU won 32-31 in overtime. - Photo by Tyler Kaufman of The Associated Press

Although with two losses, a disastrous season by Alabama standards, and little hope of playing for Nick Saban's seventh national championship at the school and eighth overall, what's a discussion of college football without the Crimson Tide?

Except the conversation is changing, especially in light of the Tide's Southeastern Conference road losses to Tennessee and LSU within the last month.

Paul Finebaum, sage of the SEC media with his ESPN talk show, phased the matter simply: Is Saban's window on championships at Alabama closing? And has college football caught up with the Crimson Tide?

New sheriffs are emerging in the SEC, and not just at Georgia, which in January slew Alabama for the national championship after losing to the Tide in the previous month's league-title game. That was the Bulldogs' first such crown since 1980, the freshman season of Herschel Walker, a latter-day U.S. Senate contender under the banner of Donald Trump. A 27-13 decision over Tennessee put Georgia atop the College Football Playoff ranking this week after the Vols led the inaugural survey. Georgia's 49-3 opening game against Oregon, a top-10 team with former Auburn quarterback Bo Nix, is one of the season's most eye-opening results.

Tennessee, though subdued at Athens, took LSU apart at Baton Rouge weeks earlier. Josh Heupel, for whom the Vols went to Central Florida after Jeremy Pruitt flamed out as head coach, has UT fans thinking of titles again. Though Georgia blocks his way to the SEC championship game, a CFP semifinal berth is within reach of the Vols and QB Hendon Hooker may be the Heisman Trophy winner that Peyton Manning was not a quarter-century back.

Alabama's two losses and shaky road triumphs over Texas and Arkansas have raised doubts about Saban's team. This one makes entirely too many penalties, going against the coach's beloved "process."

Arkansas' 5-4 record, of late considered a disappointment in these parts, might be worse if it had played Georgia or Tennessee, rather than South Carolina, out of the SEC East with permanent opponent Missouri on Thanksgiving Friday. The Razorbacks might need that game -- and Faurot Field has proven no fun place for the Razorbacks -- to secure a bid, as winner of six games, to a minor bowl.

Just what a slumping team does not need are LSU and Ole Miss back-to-back, even if in Fayetteville. Arkansas trailed Missouri State 17-0 in Week 3 at home and came out flat against Liberty, giving up three first-half touchdown passes, once trailing 21-0 before it ended 21-19. That after not playing at home in five weeks.

Sam Pittman is getting more public criticism, at least on social media, than ever in his third season as head coach. The Razorbacks lived under a halo during the 9-4 season of 2021. Things have not gone their way in most cases this fall, and quarterback KJ Jefferson is playing hurt. Pittman and his staff are taking knocks for not developing a second-team QB in preseason and a defense that can pressure passers and/or stick with wide receivers in man-to-man coverage. How long must we read, as happened last spring, that Arkansas, at last, can defend the pass properly?

Arkansas beat a good team in the opener against Cincinnati and stood 3-0 and up 14-0 over Texas A&M in the Southwest Classic at Arlington, Texas. A dark cloud has settled over the Hogs since Jefferson's late first-half fumble boomeranged into a scoop-and-score touchdown, A&M winning 23-21 after a UA field-goal attempt clanged off the post.

Alabama held on at Fayetteville with three 70-yard scoring plays in the fourth quarter -- after Heisman Trophy winner Bryce Young was knocked out. Pittman then was rapped in some quarters for not having Malik Hornsby ready to replace Jefferson (DNP) at Mississippi State. The Hogs started a transfer QB, who caved in quickly, and never got a handle on State passer Will Rogers.

In the meantime, LSU and Ole Miss (next week's Fayetteville opponent) have played their way into the AP top 10. Ole Miss faces nemesis Alabama on Saturday in Oxford, though the Tide may not be worthy of its double-digit spot in Las Vegas. LSU comes to Fayetteville, where it won two years ago on a day that the COVID-19 pandemic had Pittman's Hogs roped and tied. Arkansas reclaimed the Golden Boot last year in Baton Rouge, but the Tigers ended the Ed Orgeron era (two years after going No. 1) and brought in Brian Kelly from Notre Dame.

Many know, I'm sure, that Lane Kiffin is in his third year at Ole Miss. Agent Jimmy Sexton steered Kiffin in that direction after the 2019 season, Arkansas thinking it was a jilted party but then with a ramshackle program with not much buzz. A previous Razorback aide under Bret Bielema gone to Georgia, Pittman got his first chance as a college head coach, something one does not expect at age 58, much less in the SEC, and made the most of it.

The most disturbing note about Arkansas is that Pittman looks more and more like a first-time head coach, overwhelmed by events. Will he make the staff changes that some critics want and keep pitching the program high to recruits? We may know more, perhaps more than we want to know, by Thanksgiving weekend.