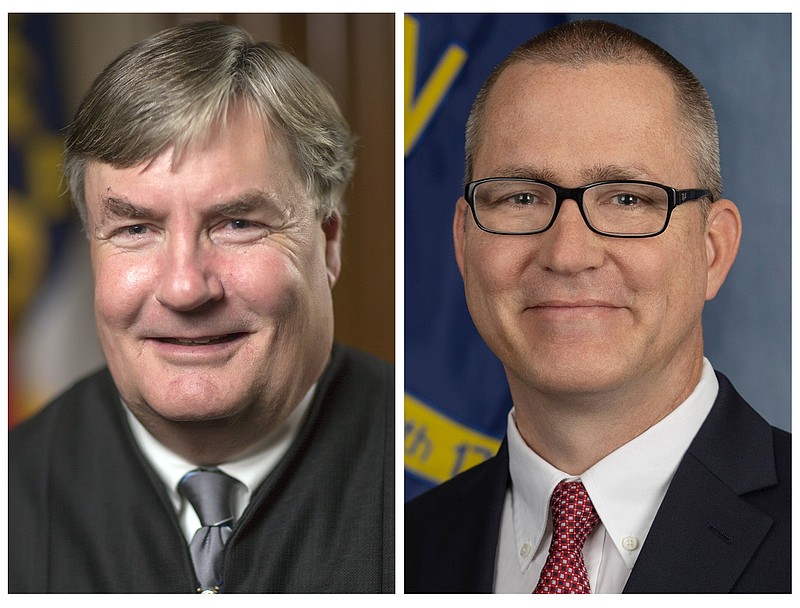 LITTLE ROCK -- Republicans have claimed key victories in state Supreme Court races that will give them an advantage in major redistricting fights, while Democrats notched similarly significant wins with help from groups focused on defending abortion access.

The expensive fights over court control in several states in Tuesday's election highlight just how partisan the formerly low-key judicial races have become. Observers say they're a sign of what to expect as legal battles over abortion, voting rights and other issues are being fought at the state level.

"Nothing about this election suggests to me that we're going to see these races quiet down anytime soon," said Douglas Keith, counsel at the Brennan Center for Justice at New York University's law school, which tracks spending in judicial races.

About $97 million was spent on state Supreme Court elections during the 2019-2020 election cycle, according to the Brennan Center. Once this year's numbers are tallied, spending records are expected to be shattered in some of the 25 states that had races targeted by groups on the right and the left.

One of the biggest players was the Republican State Leadership Committee, which focused heavily on the court races in North Carolina and Ohio.

"Republican wins in the Tarheel State and Buckeye State ensure that the redistricting fights ahead in those states within the next decade are ruled on by strong conservatives who will follow the Constitution and don't believe it's their role to draw maps from the bench," said Dee Duncan, president of the committee's Judicial Fairness Initiative.

At least $15 million was spent on those races, with more than $8 million from two super PACS -- one on the left that focused primarily on abortion and one on the right that focused on crime. Despite the outside groups' involvement, candidates ran on a similar platform of keeping personal politics out of the courtroom.

"Now, we'll be watching to make sure that the justices sitting in those seats follow through on those promises," said Ann Webb, senior policy counsel at the American Civil Liberties Union of North Carolina.

In Ohio, Republicans maintained their 4-3 majority on the court, with two GOP justices fending off challenges and a sitting Republican winning her bid for chief justice. The state's GOP governor, Mike DeWine, will appoint a justice to fill the resulting vacancy.

The results may expand the conservative bent of the court even further, with cases regarding the state's six-week abortion ban and redistricting on the horizon. Republican Chief Justice Maureen O'Connor, who did not seek reelection, has sided with court's three Democrats on high profile cases.

But Democratic groups working to protect abortion rights ramped up efforts to defend seats after the U.S. Supreme Court struck down Roe v. Wade and saw victories in several other parts of the country.

In Illinois, which is surrounded by states with abortion bans that took effect after Roe was overturned, groups pushing to retain the state's Democrat court majority had warned a GOP takeover could result in similar threats to access.

"I don't think there's anyone who doesn't think abortion was the critical issue in these races," Terry Cosgrove, president and CEO of Personal PAC, an abortion rights group that spent nearly $3 million supporting the Democrats in the races.

In Michigan, Democrats maintained their 4-3 majority on the Supreme Court after incumbent justices from opposing parties who had split on a key abortion ruling won reelection. Michigan's high court races are officially nonpartisan, though the state's political parties nominate candidates.

Democratic-backed Justice Richard Bernstein, who voted with the court's majority to put an abortion rights amendment on the ballot, won reelection along with Republican Justice Brian Zahra, who voted against it. Voters approved the measure Tuesday.

"The Michigan Supreme Court election was critical especially since we didn't know what the status of (the abortion rights amendment) would be," said Ashlea Phenicie, communications director for Planned Parenthood Advocates of Michigan, which spent nearly $1 million on the races.

Kansas voters kept all six state Supreme Court justices who were on the ballot for separate yes-or-no votes on whether they remained on the bench another six years. The state's most influential anti-abortion group, Kansans for Life, pushed to remove five of them, largely over the court's 2019 decision declaring access to abortion a "fundamental" right under the Kansas Constitution.

Two of the six court members on the ballot were part of the 6-1 majority in that 2019 decision. Voters also retained the court's most conservative member, the only dissenter in the 2019 abortion decision.

Republican bids for court seats failed in even some of the most conservative parts of the country.

Supreme Court Justice Robin Wynne in Arkansas, which has had some of the most contentious judicial races over the years, fended off a challenge from District Judge Chris Carnahan, a former executive director of the state Republican Party.

Arkansas' court seats are nonpartisan, but Carnahan had touted himself as a conservative and had the endorsement of the state GOP. A group formed by a Republican lawmaker ran TV ads calling Wynne, who served as a Democrat in the state Legislature in the 1980s, a liberal.

An unprecedented partisan pitch by Montana Republicans to install a party loyalist on that state's Supreme Court also fell short, with Justice Ingrid Gustafson defeating challenger James Brown, who had the backing of Gov. Greg Gianforte and other top Republicans. The unusually expensive campaign came as the court is preparing to hear challenges over Montana's abortion restrictions and voting access.

"The people in Montana think our judiciary is doing a good job and it is a very, very small minority that has some sort of other agenda," she said.