Season gets gloomier for Pittman’s crew 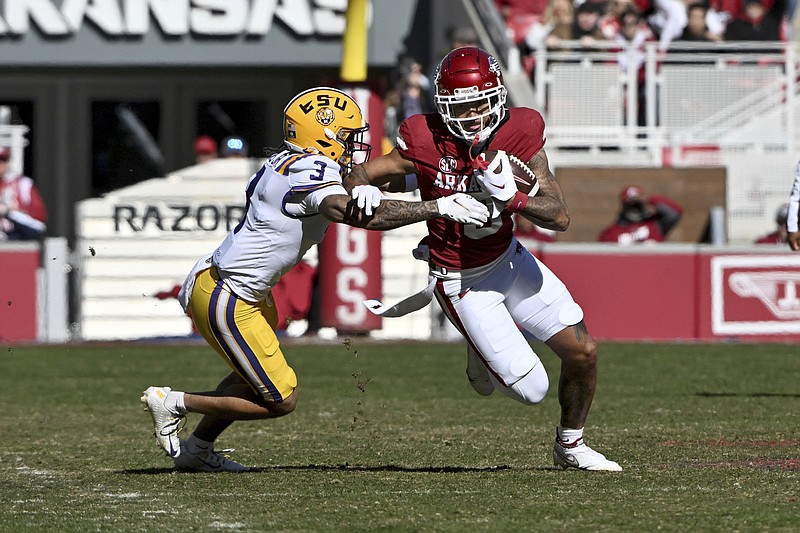 Arkansas wide receiver Jadon Haselwood (9) tries to shake LSU safety Greg Brooks Jr. (3) as he runs for a gain during the first half Saturday in Fayetteville. - Photo by Michael Woods of The Associated Press

Those stories my dad told me about LSU beating Arkansas in football against all the odds, much less when the Tigers had a clear advantage, are ringing true.

Twice in Sam Pittman's tenure as Razorback head coach have the Tigers taken the Golden Boot home to Baton Rouge after winning in Fayetteville. The 13-10 outcome Saturday, a push on the betting line, revived memories of Arkansas losses in the series that it played well enough to win.

Then again, some stories are too awful to retell. The 1966 Cotton Bowl (LSU 14, Arkansas 7), denying the Hogs of the program's first outright national title (and second straight in any version), and the 1999 regular-season finale, when the Tigers roughed up a Houston Nutt-coached team that beat Tennessee but deflated against a 2-8 team with an interim head coach, are forever haunting.

This LSU team was in a golden position to be beaten. The Tigers, after all, were traveling, their heads swimming after beating Alabama, and with Arkansas stinging after a home loss to Liberty, of all people. The 11 a.m. kickoff worked in the Tigers' favor (as it often does for the SEC road visitor) but the cold temperatures, following overnight snow, gave Arkansas an edge.

Overheard more than once last week was that Arkansas might, should win if first-string quarterback KJ Jefferson (injured shoulder) could play. Beyond Jefferson, who did not play, were Malik Hornsby and Cade Fortin, together getting most of the work (Fortin starting) when Jefferson could not go at Mississippi State, a game the Razorbacks lost. Hornsby, who might well be studying the transfer portal after a curious season, was pulled vs. LSU as was Fortin at Starkville.

In a game controlled by the defenses, LSU freshman Harold Perkins dislodged the ball twice from Fortin in the fourth period. The first attempt was ruled a forward pass, overturning the on-field call of a lost Arkansas fumble, but the second recovery went to the Tigers, who ran off the last 1:19 on the clock.

Perkins, a five-star recruit from Cypress, Texas, on coach Brian Kelly's first recruiting class at LSU, tormented the Razorbacks on defense like Joe Labruzzo on the ground in the '66 Cotton Bowl. Overcoming the flu earlier in the week, Perkins had eight tackles, four for losses, and broke up a pass along with the two forced fumbles.

For the second-straight week, the Razorbacks did not dent the end zone until the fourth quarter. Cam Little kicked a 28-yard field goal, keeping Arkansas within 6-3 at halftime, and Fortin drilled a 40-yard touchdown pass to Matt Landers with 13:17 left.

Pittman, whose honeymoon period with many fans has ended, left himself open for second-guessing when the Razorbacks were turned back (Hornsby carrying) on fourth and goal at the 3 after a fumble recovery following Little's boot. A 6-0 lead might not have held up but a defensive stop served LSU well when other things weren't going the Tigers' way.

"I know you're giving up three points at that point, but I just thought the risk to reward was better going for a touchdown there," Pittman said. (Along that line, Jefferson might have been wise to consider the consequences when he flung himself at the Texas A&M goal line and the Aggies converted his fumble into a scoop-and-score touchdown in a 23-21 game UA lost after leading 14-0.)

With an offensive tackle and Jefferson hurt, plus a defensive back suspended when caught transgressing downtown after the Liberty game, Arkansas turned to its defense for help. The Razorbacks kept quarterback Jayden Daniels in the pocket (more of a running threat is he) and yielded only 86 yards through the air.

Winning on the road has become a major part of the SEC season -- Tennessee at LSU one early example -- and in doing so Saturday, the Tigers clinched the Western Division in Kelly's first year in Baton Rouge.

If Arkansas loses out, 5-7, the pressure on Pittman will increase. No one in a position to bring about change in the program is thought to be calling for Pittman's job -- in the first place, what better coach could Athletic Director Hunter Yurachek hope to hire? Then again, not playing in a bowl game is a negative for recruiting, Arkansas getting little enough exposure as it is even after beating Penn State (Outback) in the coach's second season.

The Razorbacks are having buzzard's luck in football a year after almost every flower came up a four-leaf clover. The fans raked an SEC officiating crew over the coals Saturday -- when do they not? -- but any doubts about Arkansas with a 3-0 record have been confirmed at 5-5.