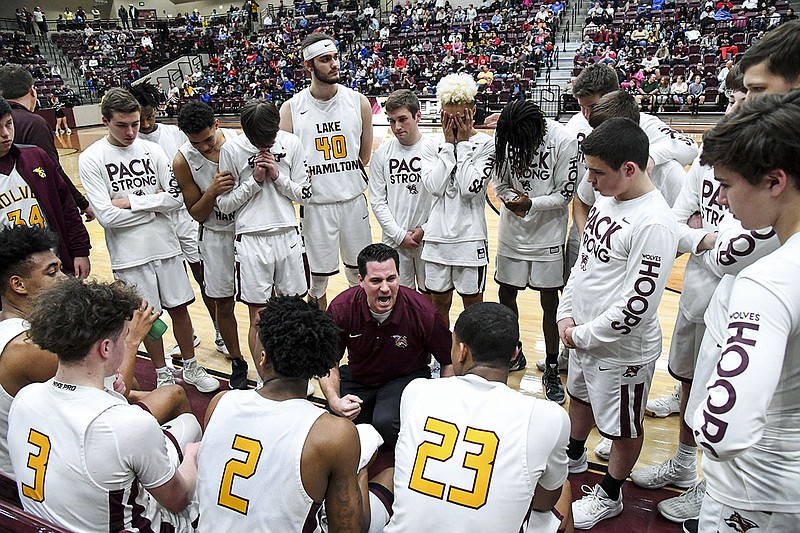 Lake Hamilton coach Scotty Pennington pumps up his team during a 4th quarter time-out during the first round game of the 5A state basketball tournament at Wolf Arena on Feb. 27, 2019. - File photo by The Sentinel-Record

Next year will be the 60th anniversary of Lake Hamilton's only state championship in boys basketball. The Wolves are seen as a title contender in March at Bank OZK Arena.

Lake Hamilton and Parkview square off Monday night at the Patriots' Ripley Arena.The Wolves beat the Patriots 87-81 in multiple overtimes in the 5A quarterfinals in Sheridan last March. The Wolves then lost 64-46 to Marion in a Saturday semifinal before Jonesboro, 55-28 over Marion, claimed the school's 15th state championship March 10 in Hot Springs. The Golden Hurricane have moved up to Class 6A, Arkansas' highest for prep basketball.

Lake Hamilton travels to Branson, Missouri, for games Dec. 1-3 and also plays in a tournament at Morrilton before hosting the Kameron Hale Invitational in the last week of the year. Scotty Pennington's 2019 Wolves lost to eventual champion Marion in the state semifinals

The Wolves' only state title in boys' basketball came in 1963 with a Tommy Barrett-coached team led by Alvin Corder and Danny Sheets. Jamie Bridges directed teams that played in the state finals three straight years -- Hot Springs winning the 1996 and '98 titles under the since-deceased Corder and Magnolia prevailing in 1997.

Defending champion Greenwood, 27-4 last year for the school's fifth state title and coach Clay Reeves' ninth, is No. 1 in Taylor's 5A girls poll. The Bulldogs' Madison Cartwright, a 5-10 senior guard, has signed with Tulsa, and 5-10 junior guard-forward Anna Trusty was named All-Arkansas Preps Girls Underclassman of the Year after averaging 17 points and 6 rebounds. Trusty scored a game-high 24 points as Greenwood defeated Jonesboro in the state final.