Oldie but goodie: Wolves vs. Benton 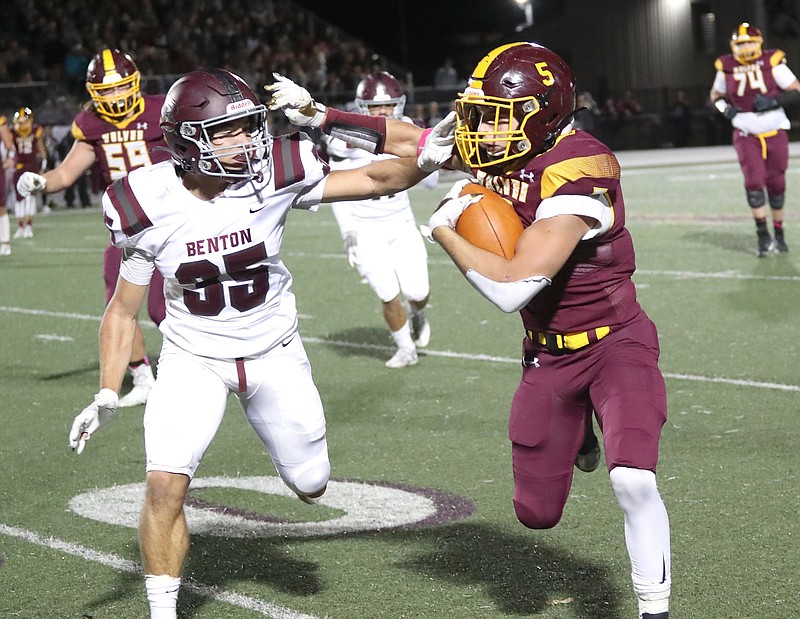 Lake Hamilton's Justin Crutchmer (5) runs for a gain as Benton's Christopher Barnard (35) defends on Oct. 29, 2021 at Wolf Stadium. Usually a conference matchup in previous seasons, Lake Hamilton meets Benton in the quarterfinals of the playoffs Friday night in an East versus West contest. - File Photo by The Sentinel-Record

Lake Hamilton, the last Garland County team standing in 11-man football, meets a familiar opponent in the second round of the state playoffs Friday night.

A game with Benton won't be unusual but the timing is different. The Wolves go to Saline County for a Class 6A game against their longtime 6A-South rival, which of late they played three weeks earlier in conference. The 9-2 Wolves are the No. 3 seed from the 6A-West; Benton, 8-2, rested last week as No. 2 seed from the 6A-East. Both teams have lost only to biggies -- Lake Hamilton to Greenwood and Pulaski Academy, Benton to Class 7A power Bryant and undefeated Little Rock Catholic.

A Lake Hamilton victory likely would bring a road rematch with Greenwood, which won 24-0 when they met in October in Sebastian County. For Lake Hamilton to play a semifinal game at Wolf Stadium, it needs to beat Benton and for Greenwood to stumble against Russellville.

The Wolves, having crushed East No. 6 seed Searcy 55-21, are likely to receive a more comprehensive checkup from Benton, which has not played since beating Sheridan 36-14 on the road in Week 10.

Fifth-seeded Russellville pulled a 30-26 shocker last week at West Memphis in one of four West-vs-East 6A matchups. A bigger surprise came with West No. 6 seed Mountain Home winning 23-6 at Marion. Elsewhere, West No. 4 Little Rock Christian plays at 10-0 LR Catholic.

In one of the state's more celebrated offseason player moves, Braylen Russell transferred from Lakeside to Benton. The junior running back has since decommitted from Arkansas for the 2024 season.

Benton (2018) and Lake Hamilton (2020) are recent state runners-up to Greenwood, which lost to El Dorado in last year's final. El Dorado, 48-27 winner over Lake Hamilton in the second round last year, finished 5-6 in defense of the title.

Garland County's other first-round survivor is Mountain Pine, seeking its third straight finals appearance in the 8-man division. The undefeated Red Devils blasted Midland 50-0 in the first round, staying at home a second week in the playoffs against Rector. Woodlawn goes to Izard County for the other 8-man game.

The Red Devils won their first state title in football since 1979 two years ago but the Arkansas Activities Association did not sanction the sport until last year.

Second-round action starts tonight with Wynne against Little Rock Parkview in a 5A game at War Memorial Stadium. The 7A games Friday send Rogers to four-time defending champion Bryant, Conway to Fayetteville, North Little Rock to Bentonville and Bentonville West to Cabot. Bryant and Fayetteville are in line for a semifinal rematch of last year's title game.

The 4A quarterfinals include Ozark at 7-4A conference winner Arkadelphia and 7-4A second seed Malvern at Lamar. Haskell Harmony Grove is home against McGehee after pasting Bald Knob 35-0. Arkadelphia beat Clinton 49-21, and Malvern bounced back from a loss to the Badgers with a 34-14 decision over Pottsville.

A showpiece game in 3A finds Centerpoint (second from 4-3A) at Charleston (1-3A champion). The Knights smacked Lavaca 48-22 last week, the Pike County team's only loss coming to 4-3A winner Glen Rose, which after a bye week faces traditional power Fordyce (third from 6-3A) at home.

Class 2A action includes Mount Ida (second from 3-2A) at conference champion Des Arc, the Lions beating Episcopal Collegiate 40-13 in the first round. Kickoffs statewide are 7 p.m.