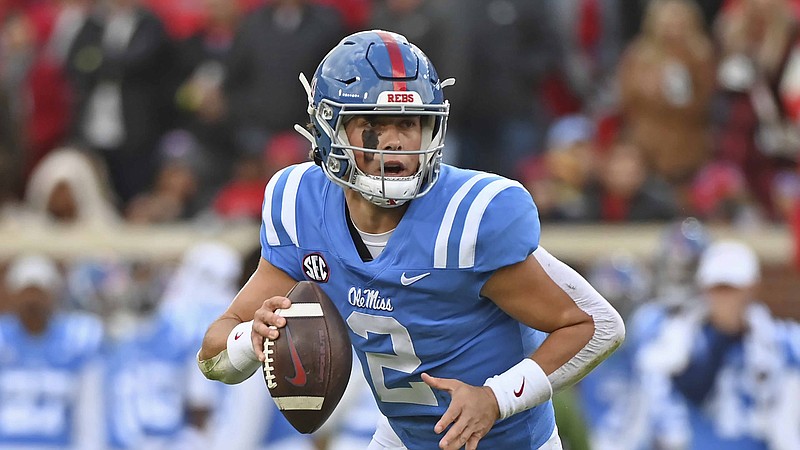 Mississippi quarterback Jaxson Dart (2) runs with the ball during the first half against Alabama Saturday in Oxford, Miss. - Photo by Thomas Graning of The Associated Press

Some younger Razorback fans may not have been born when Arkansas last won a conference football championship. So how about a refresher course before the annual game with Ole Miss.

Graybeards like myself, whether seeing themselves as sports historians or not, may supply insight on the last conference title for the Razorbacks' Saturday opponent.

Starting alphabetically: Ken Hatfield, the only Arkansas football coach other than Frank Broyles to pilot back-to-back Cotton Bowl appearances, won consecutive Southwest Conference titles in 1988 and '89. Holiday losses to UCLA and Tennessee imposed added pressure upon Hatfield, who had chances to win six years in a row against Texas but went 2-4, winning only in Austin. Arkansas, stung by a late loss to Miami, caught UCLA in Dallas when Troy Aikman was grooming for the Dallas Cowboys, thinking Tom Landry would be his coach only to find out it would be Jimmy Johnson.

Arkansas, joining the Southeastern Conference in 1992, is 0-3 as Western Division champion in the SEC title game. Georgia (big comedown from the Miracle on Markham for the Hogs) in 2002 and Florida (a dropped punt proved costly) in 2006 beat teams coached by Houston Nutt.

Danny Ford's 1995 Razorbacks, his most satisfying team, lost to Florida in the SEC championship game. "Are they the best team (I.e., most talented in the SEC)? No." asked Mississippi State coach Jackie Sherrill after a November loss in Little Rock. "Are they playing the best football? Yes." Madre Hill got hurt against Florida, then the Hogs lost to North Carolina in a backwater bowl.

Forests are being spared to produce the paper needed to write tributes to the 33 Arkansas teams that have gone without an undisputed conference title since 1989. That is good for the environment, not to mention preventing eye strain.

That's a one-act play compared with the six-decade championship slump in which Ole Miss football is gripped. At a school that punsters say it takes four Rebels to change a light bulb (three to praise the burned-out version, one to replace the bulb), they still talk about coach Johnny Vaught's 1963 team as giants that walked the Earth.

Never mind that those guys lost in the Sugar Bowl to an Alabama team without a suspended Joe Namath. It's always something with a Rebel football squad, a legacy that has passed from Johnny Vaught to Lane Kiffin.

Hugh Freeze, one of the few SEC coaches with multiple wins over Alabama's Nick Saban, could not pull it off, then was subjected to the 2015 Crimson Tide, which the Rebels beat in Tuscaloosa, defeating Clemson for a national title. Houston Nutt ("Nevertheless, he's an Oxford man," Scott Fitzgerald was quoted here from "The Great Gatsby" after Nutt bolted Arkansas for Ole Miss after the 2007 season) got Ole Miss back in Jan. 1 games but not as conference champion.

Kiffin's third Ole Miss team appeared capable of better before playing a two-loss Alabama team in Oxford last weekend. As in a road loss to LSU, the Rebels went lifeless after building a double-digit lead, falling 30-24 to an Alabama team that looked below its standards in road losses to Tennessee and LSU.

Where Ole Miss goes from here is crucial to Saturday's game with Arkansas. That it gets a 6:30 p.m. start on the SEC Network (Resort Channel 79) is charitable, with the program notes for network broadcasters Joe Tessitore and Greg McIlroy, as the officials are sure to say countless times Saturday, under further review.

Ole Miss, favored by 2 1/2 points, is better than Arkansas and quite capable of winning at Fayetteville as did LSU and Liberty (21-19). Unless, of course, Arkansas summons a fanatical effort in its last home game -- or Ole Miss does not.

Even if KJ Jefferson, his aching shoulder permitting, plays a big game for Arkansas, fans are sure to mutter why an adequate backup quarterback was not found in two games KJ missed. And, down the road, whether Sam Pittman will tweak his coaching staff, regardless if the Hogs secure a 6-5 victory with a bowl bid.

It will do nothing to make either the Razorbacks or the Rebels a championship team in 2022. An 0-3 November for Arkansas after a 3-0 September start is not a cheering thought. And if one has followed Ole Miss long, light bulbs often flash brightest before they expire.