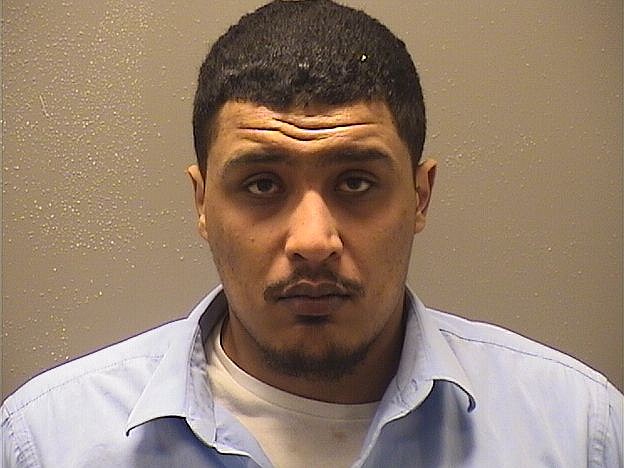 A former Hot Springs Village man was convicted Thursday of robbing an area Walmart armed with a BB gun in 2020 and sentenced to 10 years in prison after a three-day trial in Garland County Circuit Court.

Adrias Robert Turner, 24, who now lists a Springwood Road address in Hot Springs, was convicted of felony counts of aggravated robbery and theft of property and sentenced to 10 years in prison on the former and fined $2,000 on the latter. He was also convicted of misdemeanor counts of possession of marijuana and fined $100 and resisting arrest and sentenced to one year in jail, plus $440 in court costs, all to be paid upon his release from prison.

Deputy Prosecutor Caitlin Bornhoft told The Sentinel-Record Thursday Turner will have to serve 70%, or seven years, of his prison sentence before he is eligible for parole.

The jury listened to evidence in the case all day Tuesday and Wednesday and retired to consider a verdict shortly before 5 p.m., and decided about 30 minutes later to leave for the day and resume deliberations Thursday, she said, noting they deliberated Thursday for almost five hours before finding Turner guilty of all the charges.

Turner, who had no prior felony convictions, was 22 when he was arrested and Bornhoft noted the jury opted for the minimum sentence on the aggravated robbery charge.

About three hours after robbing the Walmart, 3604 Highway 7 north, on Oct. 21, 2020, Turner had attempted to rob the nearby Murphy USA station, 3608 Highway 7 north, and was taken into custody moments later a short distance away.

Bornhoft said four of the Walmart employees who were working that night testified, including the clerk whose register Turner robbed. The victim from the attempted gas station robbery had since moved to California "so we did not go forward with that charge," she said, noting they dropped an additional count of aggravated robbery last week before the trial began.

"However, in sentencing Thursday, the defendant's statement that he had 'tried the same thing' at the Murphy's that night that he had done at the Walmart a few hours earlier, was brought into evidence for purposes of sentencing," she said.

The remaining details of the Murphy incident were not presented to the jury "other than to say he was found and detained at the Murphy's by law enforcement officers several hours after the Walmart incident," she said.

According to the probable cause affidavit, on Oct. 21, 2020, around 7:30 p.m., Garland County sheriff's Investigator Andrew Goodman was contacted regarding a robbery that had just occurred at the Hot Springs Village Walmart where a Black male had reportedly used a BB rifle to threaten a store employee and fled with money from the cash register.

As Goodman arrived at the scene, he was told the suspect had left the rifle behind near the register before leaving the store. Video footage showed a light-skinned Black male, wearing a mask and a dark hoodie, pointing a gun at the cashier. After a few minutes, a second employee walked over and opened the cash register.

The suspect took the money and fled the store to a white SUV that had pulled up near the front of the store.

The first cashier said she had noticed Turner standing near a different register "messing with a rifle under his clothing." After a few moments, he turned and pointed the rifle at her. She said he told her to open the cash drawer and give him all the money and that he knew her family and her children and would "come and kill them" if she called the police.

She said the second employee came over and opened the register allowing the suspect to take the money and leave.

Around 10:30 p.m. that day, deputies were dispatched to the Murphy USA station next door regarding a suspect matching the description of the Walmart robber who had just attempted to take money from the gas station.

Deputy Bennie Strickland located a man, later identified as Turner, who matched the description and was walking on the driveway between the Murphy USA and the Walmart. Investigators arrived to assist and in patting down Turner found a large amount of cash in his hoodie pocket and a baggie with 4.5 grams of marijuana.

The clerk at Murphy said Turner had walked up to the window and told her to give him all the money in the cash register. She stated he told her if she called the cops he would kill her and her family.

Turner was taken to the sheriff's department for questioning and later charged with aggravated robbery and terroristic threatening. While he was being escorted to a waiting unit to be taken to the detention center, Turner broke away and began running around to the back of the unit, but deputies were able to tackle him and arrest him again.

An additional charge of second-degree escape was filed, but the escape and threatening charges were both withdrawn later when the case was filed over to circuit court.

According to court records, Turner was previously arrested on April 2, 2016, and charged with a felony count of aggravated assault on a law enforcement officer after spitting on a Hot Springs Village police officer. On July 17, 2017, Turner pleaded guilty to a reduced charge of third-degree battery, a misdemeanor, and was sentenced to one year in jail, suspended, fined $1,000 and ordered to pay $170 in court costs.