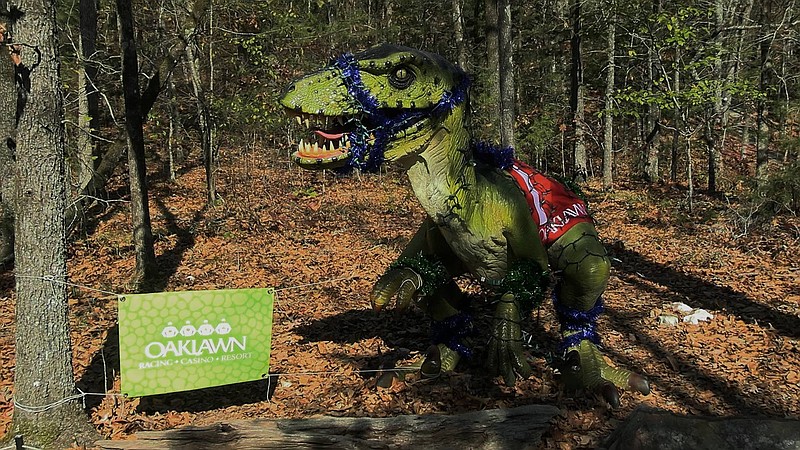 A dinosaur on Mid-America Science Museum's Dino-Trek that was decorated by Oaklawn Racing Casino Resort sports a racing silk, garland and lights as part of the museum's Dino-Lites display. - Photo by Lance Porter of The Sentinel-Record

With Thanksgiving around the corner, Mid-America Science Museum is bringing back one of the most popular children's events of the holidays -- Dino-Lites.

Started five years ago after a suggestion by Hot Springs Mayor Pat McCabe, the most terrifying holiday lights display of the year opens Friday, Nov. 25 at 5 p.m.

"He kind of wanted to have something similar out here like Garvan Gardens does with their lights," Miriam Baldwin, development assistant at Mid-America Science Museum, said. "Since we've got our dinosaurs on our Dino-Trek, it was just something to do for the holiday, have them decorated."

In 2018, the museum reached out to the community and asked them to help decorate and get lights put together, she said.

"And that's just kind of how it started to be. We've got community organizations, nonprofits, businesses, and they will come together and just decorate -- either holiday, maybe a popular movie, or just something kind of specific to their business, and decorate them for the holiday."

Baldwin said the museum works to try and get sponsors for each of the 13 dinosaurs on the Oaklawn Foundation Dino-Trek, the state's first and only permanent dinosaur exhibit, which allows visitors to learn about the rise and fall of dinosaurs from the Triassic through the Cretaceous periods.

"We've got a lot of loyal participants coming back," she said. "We've had the Garland County Library come back for the past few years. We've had the college help do it. ... So we just try and get as many who would like to participate, and it's a big kind of staff thing for them, too, just to get together."

Watching the children make their way through the exhibit this time of year is often a highlight for the museum's staff.

"Dinosaurs, kids love them anyway, so ... we got that 'it' factor that they do," Baldwin said. "But it's always nice to see them -- they'll recognize either a Christmas movie, or they'll just see them with Santa hats on the reindeer ears, and they're just excited to be out there. We do it at night after we close, so 5-7 p.m. So it's kind of after-hours time, and they're even more excited to be out there, and all the Christmas lights. So it's something that you just have to see all the kids' faces light up with happiness."

The event will be open each Friday and Saturday through Dec. 23 and is included with general admission to the museum. Baldwin said the museum usually sees an increase in attendance due to the event as well.

"We get a big kind of rush with that Thanksgiving break from schools, and then once they know that we're open later hours those Fridays and Saturdays, we'll get a big rush of people that can come to the museum during the day, and then if they have the admission, their ticket's good for coming back to Dino-Lites," she said.

"So we'll see probably double the people coming through. We only get another couple hundred those Fridays and Saturdays than we would do on a weekday. They brave the cold for us; they brave the rain for us to go see the dinosaurs and look at all the decorations, so it's nice that they're loyal to do that."

McCabe will once again "flip the switch" at the lighting ceremony on Friday. 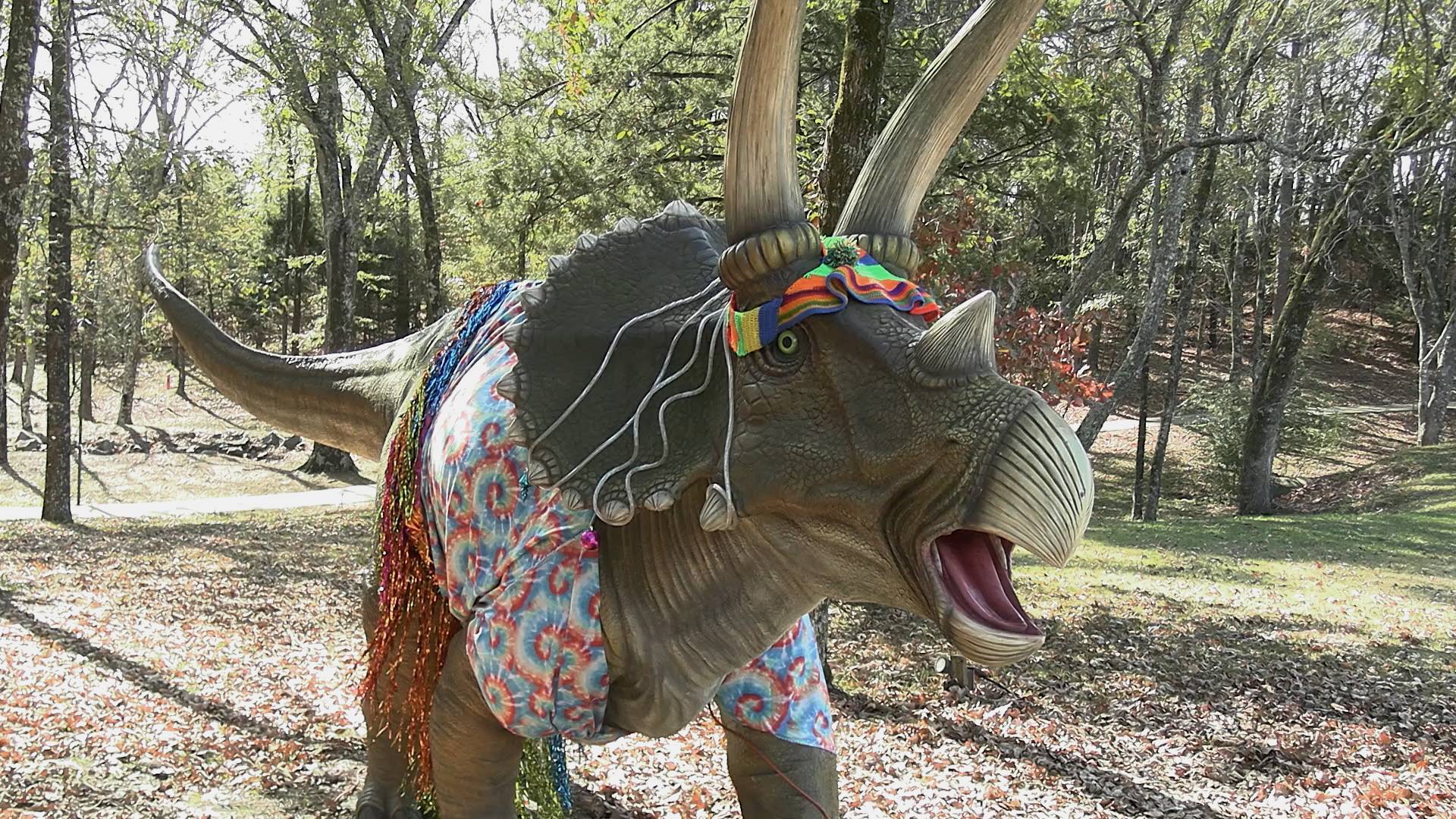 A triceratops is decorated with a brightly-colored outfit as part of Mid-America Science Museum's Dino-Lites display, which opens Friday. - Photo by Lance Porter of The Sentinel-Record 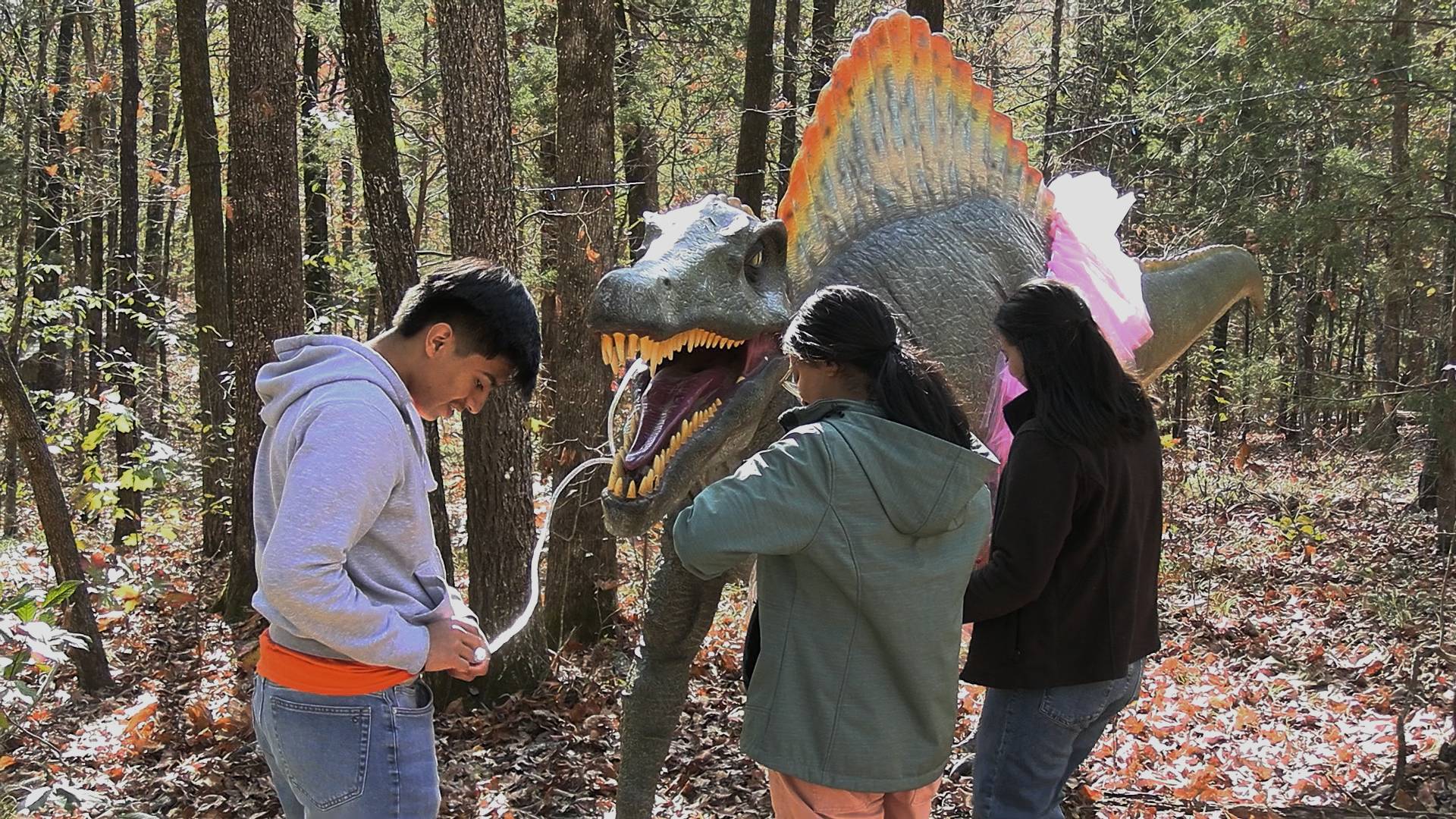 Workers from Mid-America Science Museum decorate one of the dinosaurs for the annual Dino-Lites display that opens Friday at 5 p.m. - Photo by Lance Porter of The Sentinel-Record