What it was was football, bizarre or not 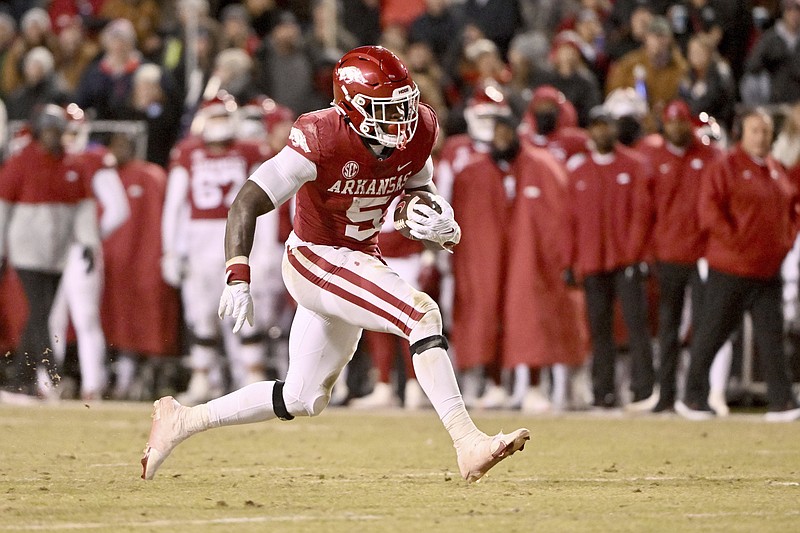 Arkansas running back Raheim Sanders (5) breaks away from the Ole Miss defense to score a touchdown during the first half Saturday in Fayetteville. - Photo by Michael Woods of The Associated Press

If, like me, you grew up watching football in the old Southwest Conference, the Arkansas-Ole Miss game made as much sense as Euclidean geometry or the legal term collateral estoppel.

Frank Broyles and Darrell Royal, those sideline masters of my youth, no more wrote this script than Clifford Irving penned an autobiography of Howard Hughes way back when. No 7-6 or 14-13 game would this be, even if Arkansas' Sam Pittman has old-school values for a first-time head coach in his 60s.

The winning team gave up 703 yards, yet not a discouraging word (well, maybe a few) could be heard about the Razorback defense.

Ole Miss had a pair of 200-yard rushers and outgained Arkansas by land and air, even holding the ball 20 seconds longer. Instead, the Rebels turn to Mississippi State on Thanksgiving night with grand dreams of a few weeks back gone a-glimmering. And with many wondering if coach Lane Kiffin, ever the dazzler but seldom with a defense of championship rank, will return to Oxford for a fourth season.

Arkansas has no such worries regarding Pittman, only the fourth Razorback football coach to produce a bowl-eligible team in his first three seasons (Houston Nutt, Bobby Petrino and Bret Bielema were the others). A 42-27 victory made Arkansas 6-5, averting a 3-4 season record at Reynolds Razorback Stadium and lifting some of the suspense from Friday's Southeastern Conference game at Missouri, not that Stephen King will be writing that script.

At 27 degrees, it was billed as the coldest kickoff for a Razorback game in Fayetteville. Arkansas went years without playing a night game on campus, unbending until fans could take interstate highways (replacing pig trails, real or virtual) to games. This one ended after 10 p.m. local time amid dropping temperatures, conditions only for the strong at heart, hopelessly loyal or highly medicated fan. (Pittman said, in fact, that he might sip a cold beverage after the game.)

With the game in Arkansas' grip at halftime (35-6) and good as over after the first play of the third quarter, SEC Network announcers recognized a blowout. Camping out on the sidelines, they felt it, too. Among other things, Tom Neal, Jordan Rodgers and Cole Cubelic griped about the weather, fed the Razorback mascot and generally wondered if it was football they were watching or some crazy video game.

For the third-straight Saturday on this field, the losing team did not score a touchdown until the fourth quarter. As had Arkansas against Liberty and LSU, Ole Miss could not get a handle on victory even with a 21-point final round. Not that Ole Miss didn't have Arkansas fans pacing the floor even at 42-27. Pittman reinserted Rocket Sanders to take the edge off, and the Hogs recovered an onside kick with 2:55 left.

And, like that, the one-time record of 7-0 for the Rebels became 8-3, both teams losing to LSU and with the Razorbacks also at home to Alabama.

It was a virtual coaching clinic of modern football in a dialect that Broyles and Royal likely would not grasp. Something like Kiffin came to teach Nick Saban, the latter-day Bear Bryant, while an aide at Alabama.

Oldtimers might urge that, on a cold night, caution should be nine tenths of the law. Tennessee coaches, in particular, learned from Gen. Robert Neyland and his acolytes that if conditions weren't night, better that the Vols play on defense with hopes of creating a turnover or posting a big play in the kicking game. Flat-earth football, incidentally, went out with the single wing. If you have any doubts, check out a high-school game, where defense is becoming a lost art.

Sanders, who wears No. 5, did a striking impersonation of Darren McFadden on a 68-yard burst up the gut on the first play of the third quarter. Sanders, on a 24-for-232 night, became the first Razorback since McFadden against South Carolina in 2007 to rush for 200 yards and score three touchdowns in a conference game. After that one, Steve Spurrier said the Gamecocks "couldn't have tackled a Division 3 team."

Jefferson, bouncing back from a shoulder injury against a home-state team (the North Panola High product sitting out the Mississippi State game), went 17-of-22 for 168 yards and rushed eight times for 47 yards, long gain of 23.

Winning the coin toss and electing to receive, Ole Miss fumbled on the game's first possession, then had two touchdowns negated by penalty. Curiously, the Rebels never seemed far out of a game they lost all chance of winning early. (Ole Miss, slight betting favorite all week, saw its spot fall to one point by kickoff.)

More and more, that's part of modern-day football. An SEC Network guy said later, from the warmth of the studio, that collecting turnovers and scoring in the red zone (inside the 20s) has become the blueprint to success.

Bear Bryant got a taste of it in a 37-37 tie with Florida State in 1967, the Alabama coach wondering aloud "what in the hell is going on here?" Frank and Darrell didn't teach it, but at these ticket prices, it's a necessary convenience, keeping fans on the edge of their seats, as the Nebraska fight song tells us, "in all kinds of weather."

Print Headline: What it was was football, bizarre or not