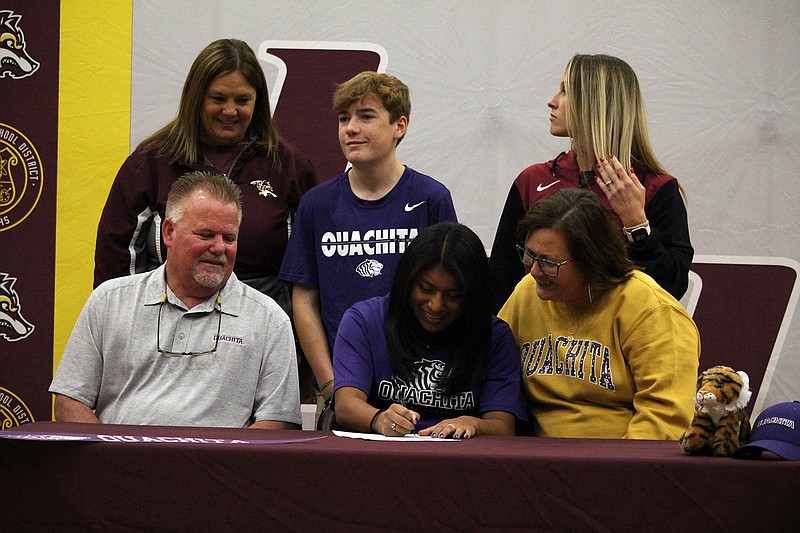 Head coach Karen Smith sent three players onto the next level during a signing ceremony inside Wolf Arena Wednesday, and all three players illustrated what it meant to be a team player during their time as Lady Wolves.

"Amongst one of the best we've had here at Lake Hamilton by far," Smith said. "Daylee is a verbal leader. She is the one who talks it on the court. She talks it at practice. She's not afraid to be that leader. She also is a great team player."

Now known as the person who celebrates her teammates' accomplishments, Aitken had to grow into a better teammate in her time at Lake Hamilton.

Smith noted just how many pictures there are of Aitken jumping high into the air when one of her teammates does something well on the court.

Both of Aitken's parents and her grandparents attended Arkansas Tech. Originally, the senior did not want anything to do with the university so she could make her own path.

Looking at the future Tiger, Smith described Tice as one of the best defensive players she has ever coached, but really highlighted just how good Tice's serving game was in her time at Lake Hamilton.

"One of my favorite things is to watch her when she's on the line and knowing the other team is rattling in their shoes before she even throws the ball in the air and serves," Smith said. "It's a lot of fun watching Ann Marie play."

Tice aims to take that serving ability to the next level at OBU.

"I love serving," Tice said. "That's my favorite part about volleyball. Just being able to serve to help the team out and just better the team with what I bring to the court."

Tice looks forward to the intense speed of collegiate volleyball.

"High school, it's pretty fast but college is just so much faster," Tice said. "I love digging the balls. I love serve-receive. So just getting quick, fast pace and all the cheering and stuff and the loud environment that will be there."

Smith said if she had a most improved award, she would give it to Worden.

"Emalee is one of the players coaches love to have on the team," Smith said. "Emalee shows up to practice every day happy to be there, smile on her face, ready to work. Emalee wants to learn. She wants to get better. What can she do to help her teammates?"

Worden went from a player just playing for fun to a competitor with collegiate talent.

Lake Hamilton fielded a roster chocked full of seniors this season, and three will be playing Division II volleyball in the Great American Conference next year.

"It shows that our coach is amazing," Worden said. "I hope that I leave behind a lot of love and a work ethic."

It was clear to see that the three seniors cared about their teammates, and their legacies will no doubt involve team spirit and love for the game.