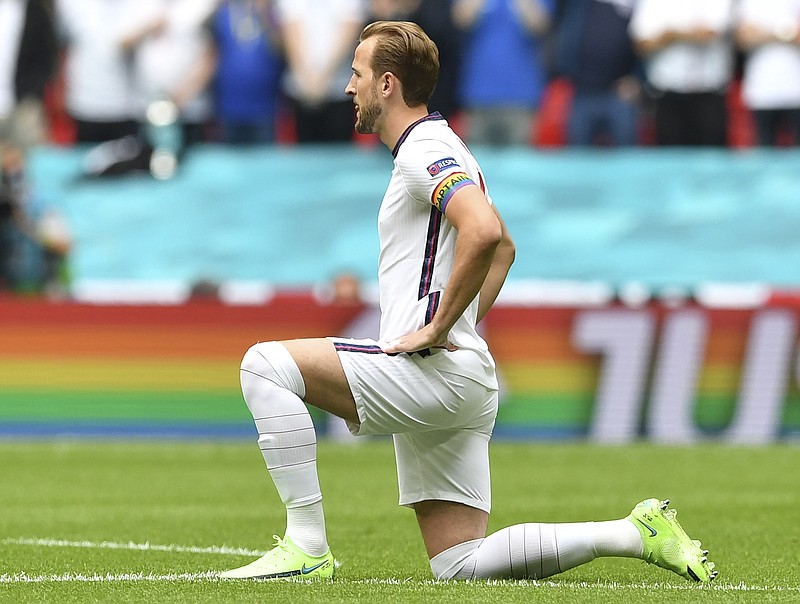 FILE - England's Harry Kane wears a rainbow armband as he takes the knee prior to the Euro 2020 soccer championship round of 16 match between England and Germany at Wembley Stadium in England. The captains of seven European nations will not wear anti-discrimination armbands in World Cup games after threats from FIFA to show yellow cards to the players. The seven soccer federations say "we can’t put our players in a position where they could face sporting sanctions.” (Justin Tallis, Pool Photo via AP)

DOHA, Qatar -- FIFA's threat of on-field punishment for players pushed World Cup teams to back down Monday and abandon a plan for their captains to wear armbands that were seen as a rebuke to host nation Qatar's human rights record.

Just hours before the first players with the armbands in support of the "One Love" campaign were to take the field, soccer's governing body warned they would immediately be shown yellow cards -- two of which lead to a player's expulsion from that game and also the next.

That changed the calculus for the seven European teams, which may have expected merely to be fined. The displays are a violation of FIFA rules.

No player had the "One Love" armbands Monday, although England's Harry Kane wore the FIFA-approved "No Discrimination" armband in the match with Iran.

It was the latest dispute that threatened to overshadow play on the field. Since being awarded the World Cup hosting rights in 2010, conservative Muslim Qatar has faced a raft of criticism, including its treatment of low-paid migrant workers and woman and its suppression of free speech. It came under particular fire for its criminalization of homosexuality.

The captains of seven European nations had vowed to wear armbands carrying the heart-shaped, multicolored logo of the "One Love" campaign, which promotes inclusion and diversity in soccer and society. That set up the prospect of worldwide viewers seeing a symbol of disapproval with the host country and defiance of FIFA on the arms of Kane, the Netherlands' Virgil van Dijk and Wales' Gareth Bale on Monday.

But in the end, the teams said they couldn't sacrifice success on the field.

"As national federations, we can't put our players in a position where they could face sporting sanctions, including bookings," the seven soccer federations said in a joint statement, referring to the yellow cards.

The captains of Belgium, Switzerland, Germany and Denmark had also pledged to wear the armbands in the coming days.

"Our No. 1 priority at the World Cup is to win the games," the Dutch soccer federation said in a separate statement. "Then you don't want the captain to start the match with a yellow card."

The risk of getting a second yellow, which would see a player sent off the field for the rest of the game and banned from the next, is particularly tricky in a tournament where teams play only three games before the knockout rounds begin.

"FIFA today prohibited a statement for diversity and human rights -- those are values to which it is committed in its own statutes," Neuendorf told reporters in Qatar. "From our point of view, this is more than frustrating and, I think, an unprecedented action in World Cup history."

"Players must have a right to express their support for human rights on and off the field of play and we will support any of them who will use their own platforms to do so," the union said. "We maintain that a rainbow flag is not a political statement but an endorsement of equality and thus a universal human right."

"Today we feel contempt for an organization that has shown its true values by giving the yellow card to players and the red card to tolerance," the FSA said.

The Belgium federation expressed frustration that FIFA did not act sooner to resolve an issue that began two months ago, only to come to a head on the morning of matches for three teams. The Europeans "tried several times to avoid escalating this initiative ... but we have had no response," the Belgian federation said.

Manon Aubry of France, the president of the Left group at the European Parliament, wore the rainbow armband Monday during a debate on human rights in the context of the World Cup.

"Shame on those who did not allow armbands -- 'One Love' armbands -- to support the LGBTQI. I'm proud to wear that armband here," said Aubry, who was reprimanded for wearing it inside the Parliament, where such displays are not allowed during plenary sessions.

"You've bound the hands of the national teams. They're there to compete," he said.

Sandhu took issue with Infantino's choice of words, saying: "You don't feel gay. You are gay."

It wasn't immediately clear what, if any, influence Qatar's autocratic government had on the armband decision. The government and its Supreme Committee for Delivery and Legacy, which oversees the World Cup, did not immediately respond to a request for comment.

The European plans were in breach of World Cup regulations and FIFA's general rules on team equipment at its games.

"For FIFA final competitions, the captain of each team must wear the captain's armband provided by FIFA," its equipment regulations state.

The soccer body's proposal, announced Saturday, was for captains to wear armbands with socially aware, though generic, slogans. In that offer, armbands reading "No Discrimination" -- the only one of its chosen slogan aligned with the European teams' wish -- would appear only at the quarterfinal stage.

On Monday, it offered a compromise, saying captains of all 32 teams "will have the opportunity" to wear an armband with the slogan "No Discrimination" in the group games. 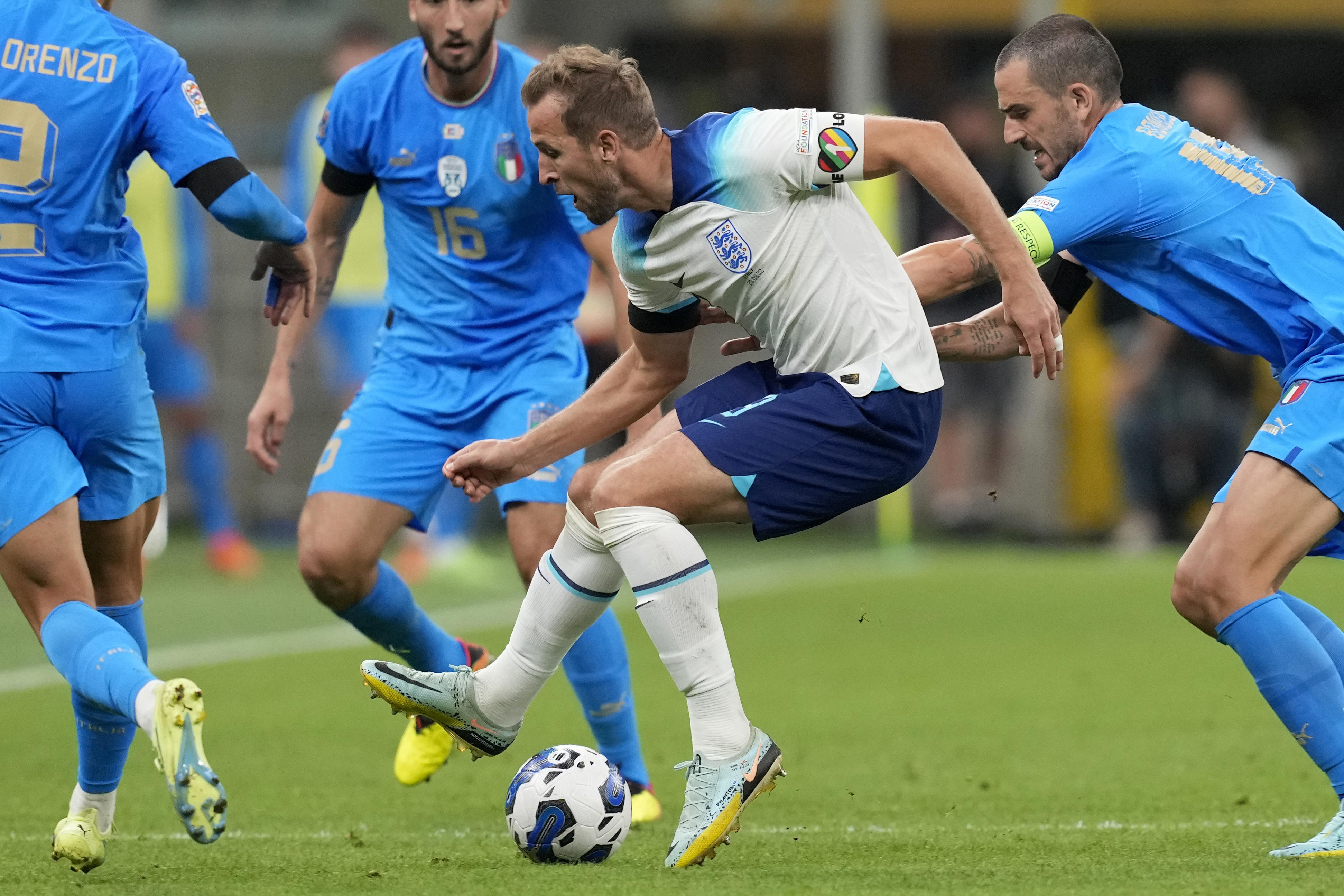 England's Harry Kane, center, wearing a rainbow armband, controls the ball during the UEFA Nations League soccer match between Italy and England at the San Siro stadium, in Milan, Italy, on Sept. 23. The captains of seven European nations will not wear anti-discrimination armbands in World Cup games after threats from FIFA to show yellow cards to the players. - Photo by Antonio Calanni of The Associated Press 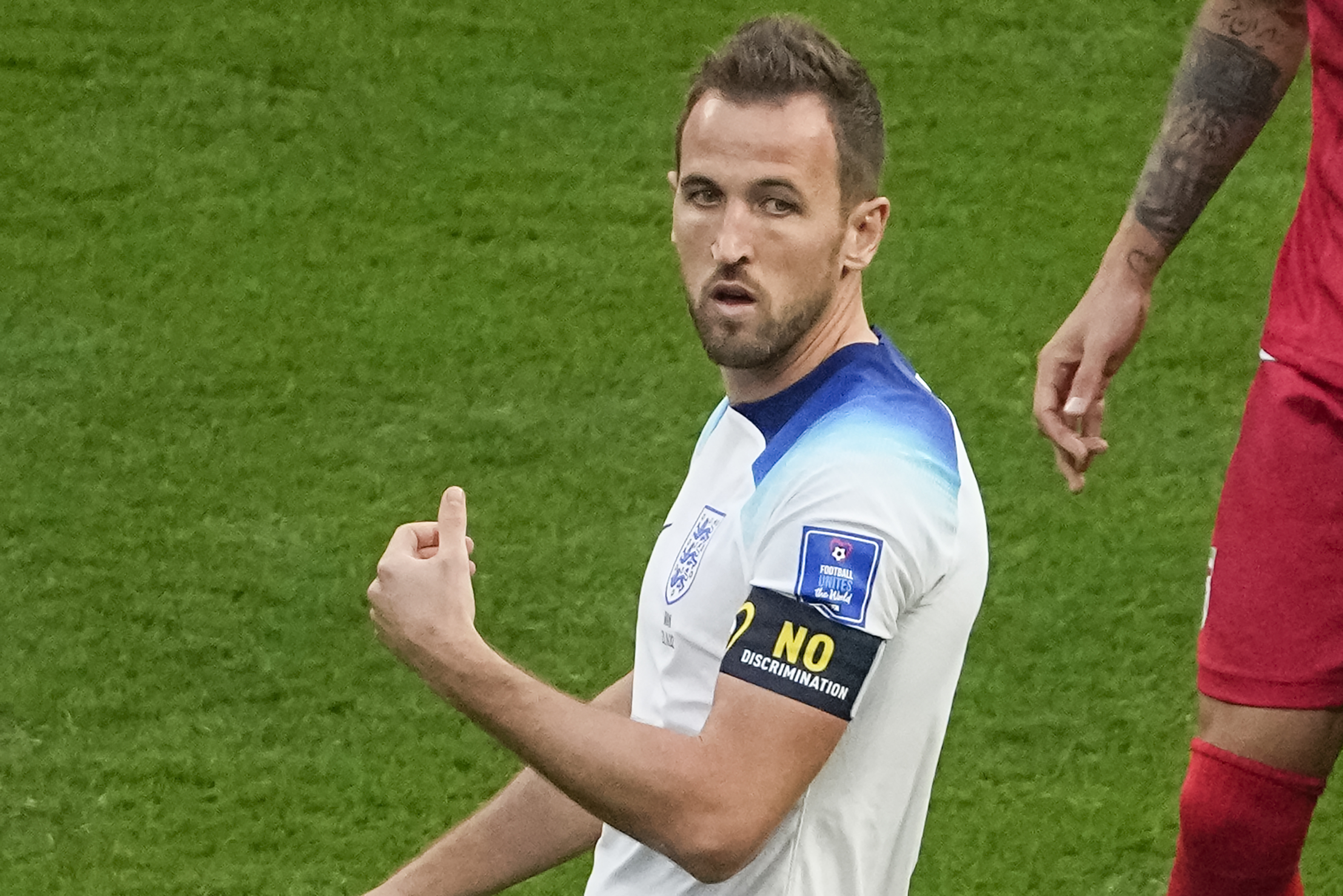