he Hot Springs School Board discusses the addition of three institutional law enforcement officer positions during its monthly meeting last week at the district administrative offices. - Photo by Donald Cross of The Sentinel-Record

The Hot Springs School District will have an armed officer on each school campus after the district's school board approved the creation of three new positions during its regular monthly meeting last week.

"School safety is our top priority, and it has to be -- not only here in our school district, but across our county, our state, our nation," Hot Springs Superintendent Stephanie Nehus said.

"When we established our Hot Springs School District Police Department three years ago, it was always our intent that we had enough officers to cover our entire district. But as in anything that we do, we start small and then we try to grow that up," she said.

The district formed its own department in 2019 following the passing of Act 629. After meeting a list of requirements, Nehus and district Police Chief Carl Seymour, with approval and support from the school board, went before the Arkansas Commission on Law Enforcement Standards and Training which reviewed and approved the request in October of that year.

The district will primarily use Every Student Succeeds Act money to fund the positions, which will help keep them sustainable over time, and money from Gov. Asa Hutchinson's statewide $50 million school safety grant that was approved this fall. The grant money is being issued to help schools implement and follow the recommendations of the Arkansas School Safety Commission, including that each school campus have its own armed safety officer on site.

"That was just an opportunity for us to kind of move forward much faster than we might have been able to do in the past," Nehus said of the commission's report and grant funding. "We just felt like it was a good time to go ahead and make the jump and ensure that we did have an armed presence at every single one of our campuses."

McCrary Means serves as an officer at the secondary campus alongside the Hot Springs Police Department's school resource officer, whom the district partners with.

"I'm ecstatic about it," said Seymour.

"I'm very excited to have the additions come because, again, in my world, the law enforcement world, having somebody there readily accessible to be able to respond to any type of incident that may occur is -- it's a little bit of ease that it offers.

"We hope that nothing of the magnitude that happened at Uvalde (Texas) ever happens here, but rest assured if anything like that would happen, we've got someone there ready to respond to be able to offer a safer environment for our students and our staff," he said.

The starting salary for the new positions is $39,398, but increases depending upon the number of years of experience. Each one is on a year-round, 240-day contract.

Seymour said the district has a mutual aid agreement with the HSPD.

"We train with them, we share resources, they use our buildings to help train for some of their incidents, so we have a great working relationship with the Hot Springs Police Department," he said.

Nehus noted the HSPD has access to all of the district's buildings.

"They have keys to our buildings. You know, they have the floor plans. A lot of those components ... I just want our community to know that while there's a lot of safety things that we do you can't visibly see, it is our top priority, and that's not just words. That's really ingrained in all of the actions that we do," she said.

"I think it's important that the community understands that because so much of safety, the community doesn't necessarily need to see. They don't need to know all of the things that we're doing, because sometimes that can compromise, actually, our plans. But our partnership with the Hot Springs Police Department, I couldn't talk more highly about that."

She said their goal is to get at least one of the three new positions hired to begin Jan. 4 when students return from Christmas break. Two officers interviewed for a position on Wednesday and more are scheduled to interview over the next few weeks.

"It's my goal that I can take at least one name, if not more than that, to the board in December for start in January," Nehus said.

"As we've kind of said all along, it's our goal to have all three positions filled July 1 as we start the '23-'24 school year.

"So we've got a little flexibility and a little bit of time, but we'll definitely have at least one officer to cover elementary campuses as early as January," she said. 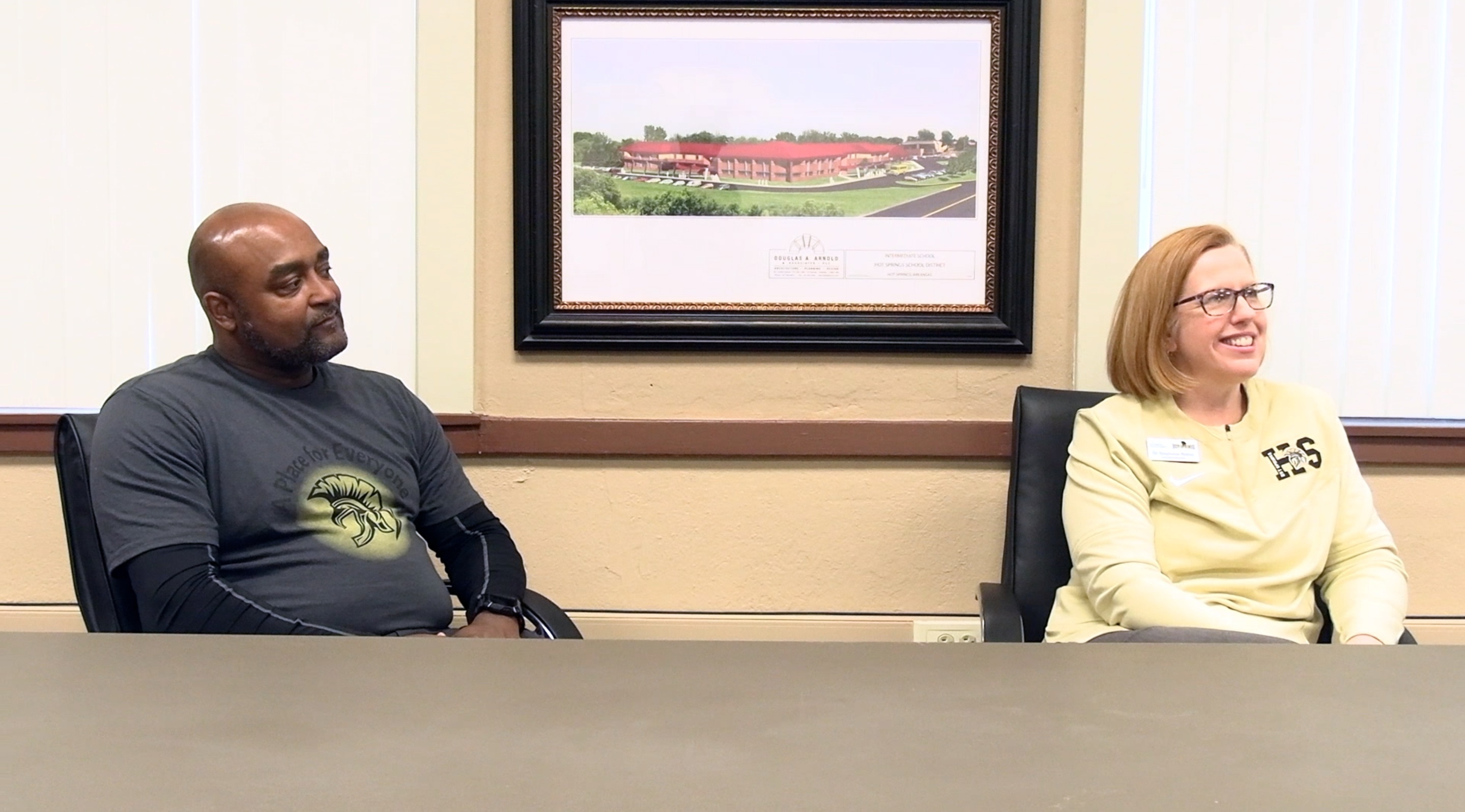 Hot Springs School District Police Chief Carl Seymour and Superintendent Stephanie Nehus talk about the extra layers of protection the three approved law enforcement positions will provide to the district as a whole. - Photo by Lance Porter of The Sentinel-Record