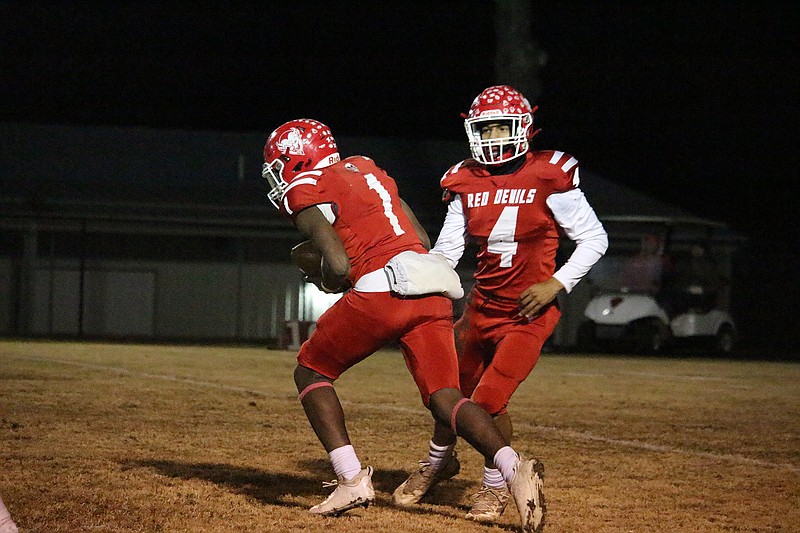 Mountain Pine's Keelan Dobbins (4) hands the ball off to Isaiah Miles (1) against Rector Friday at Stanley May Field. - Photo by Krishnan Collins of The Sentinel-Record

We'll always have the 2009 Fountain Lake Cobras, the 2008 Lake Hamilton Wolves and the 2006 Jessieville Lions.

In case anyone forgets how to celebrate a state football championship in Garland County, those teams left templates to study. Lake Hamilton gave us another in 1992 -- the best local team in my time at the newspaper -- as did Mountain Pine in 1978 and '79, and those great Hot Springs teams of 1970 and '72 that I regret not seeing.

Those teams thrived under the playoff system, which the Arkansas Activities Association brought back in 1969. If anything, the season has become too long, with too many playoff-teams -- "Bowl eligible isn't the same as bowl worthy," a former colleague was known to say. Not that anyone could or should push for a shorter season because, as someone is sure to remind, it's all for the kids. Keep that in mind the next time a conference fifth-place team goes on the road against a league champion.

Garland County teams, you might have noticed, will be idle on Thanksgiving weekend. Lake Hamilton and Mountain Pine were the last teams in action, the Wolves falling 31-0 at Benton in 6A and the Red Devils 30-28 to visiting Rector in the 8-man semifinals. Mountain Pine bid for an official state title after the AAA did not sanction the 8-man game in their 2020 title season but counted their finals loss last year in the standings.

Rector is not a football team any other Garland County 11-man team is likely to play. In southeast Clay County, it's close to Memphis -- and Missouri -- and not one that I know nearly as much about as others starting in "C," scattered as diversely as Chicot and Crawford along with Clark and Crittenden, where they won't be chasing around Southland Greyhound Park much longer.

But his teams had good shooters, which was said of him at Rector, and Gardner, although perhaps not the best athlete in his family, could light up the sky. Butch went to work for Harding, and though our paths seldom cross, he remains a good friend from college days when, with Eddie Sutton, Arkansas was turning the state onto hoops.

It's basketball time again in Garland County, and for an early-season showdown, Lake Hamilton went to Little Rock Parkview on Monday ranked one and two in the state newspaper's preseason 5A boys poll. Scotty Pennington's Wolves beat Scotty Thurman's Patriots in five overtimes in the state tournament in March. They were to play at Ripley Arena, honoring late coach Charles Ripley, for whom state prep basketball is unlikely to have a better friend.

Since 2007, with the exception of 2013 when it reverted to Little Rock's Barton Coliseum, the AAA has held the state basketball finals in Hot Springs at what is now Bank OZK Arena. Hot Springs' Steve Arrison made the definitive endorsement by reminding fans that in every game over three days, Arkansas youths would be playing for championships. If one can listen to Freddie Mercury belt out "We Are the Champions" 14 times, it's a scene one should make.

Lake Hamilton's varsity girls claimed a title in 2009 for Brandi Higginbotham-- what I couldn't give to see (Stephanie) Fincham and (Jessica) Weatherford play again -- and Hot Springs' girls won crowns for Mark Upshaw in 2015 and Josh Smith in 2018. (If they played the 2018 series a second time, I still would favor Watson Chapel over Hot Springs while thinking Nettleton the team to beat. "The best coaching job in this building in 20 years," I told Smith after a win at Trojan Fieldhouse, one witnessed by his father, Gary Don, late of the Lakeside girls and a state-championship winner at Union.)

As in volleyball, another sport that crowns Arkansas prep champions locally, basketball has experienced a championship drought in our backyard. Lakeside, in 2000, is the last local boys' team to win a state title -- and if Landon Trusty, Andy Brakebill, coach Tommy White and the others from that year want to feel like the '72 Miami Dolphins, said to pop open a champagne bottle after the last NFL team with a perfect record loses each year, that is their right.

As for local football, a few closing thoughts. Lake Hamilton started it all with a road win over Lakeside -- exposing holes in the Rams' defense that could not be repaired -- and might have had the biggest win at home against 6A newcomer Little Rock Christian. No one ever thought to see shutout losses to Greenwood and Benton, especially after a 41-39 game with Pulaski Academy. The balance of power in Arkansas preps football, if you haven't noticed, has shifted to western and central sections, semifinals with Cabot at Bentonville in 7A and Benton at Greenwood in 6A bearing that out.

That said, one to watch Friday is the 6A semifinal sending Pulaski Academy, last year's 5A champion, to War Memorial Stadium against unbeaten Catholic High. The Rockets scored with four seconds left to beat Christian last week -- nice way to launch a rivalry; they have had that championship look since stomping Benton early. This might be Benton's best chance for a state title since Max Graham's 1977 team, but Greenwood is a superstitious pick on Thanksgiving weekend.

As evidenced by Camden Fairview and Little Rock Parkview winning two playoff games, the 5A-South stiffened this season -- ask Hot Springs and Lakeside for verification. After some terrible games this year involving entrenched powers, Pulaski County is host to to two dillies this week with Parkview at Robinson out on Cantrell Road and the one on Markham Street.

An Arkadelphia-Malvern rematch would come only in the finals, requiring the Leopards to beat Warren on the road Friday. Though I did not graduate from the school, any Harding student is subject to be fanned by the flame emanating from Harding Academy. The Wildcats get McGehee next with Arkadelphia a possible semifinal opponent.

With Centerpoint losing, my interest in the 3A playoffs dwindled, though a Melbourne-at-Glen Rose quarterfinal looks appealing. Class 2A travelers are advised to eat catfish at Nick's in Carlisle or barbecue at Craig's in De Valls Bluff -- Murry's Restaurant in Hazen is a third option -- before two area games on the Interstate 40 corridor, Mount Ida at Carlisle and East Poinsett County at Hazen.

They're saving the 8-man final until next week. It's Rector vs. Izard County. Basketball, anyone?