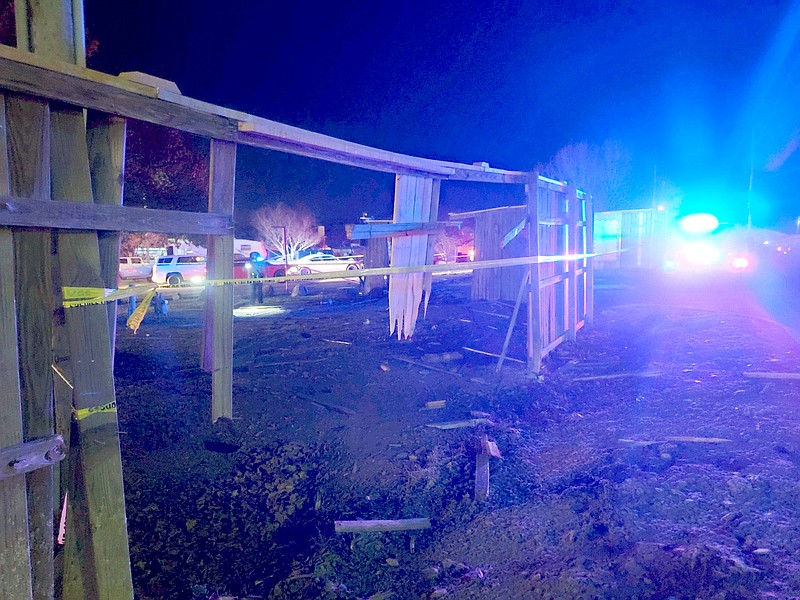 Yellow caution tape is stretched across a broken fence where a truck apparently broke through Tuesday night at Lake Hamilton RV Resort, 3027 Albert Pike Road. - Photo by Donald Cross of The Sentinel-Record

A pickup truck driven by a Hot Springs man crashed through the fence of a local RV park off Thornton Ferry Road Tuesday, killing a local man and injuring a local woman when it collided with two parked RVs, according to an Arkansas Department of Public Safety fatal crash summary released early Wednesday.

Charles Coburn, 81, of Hot Springs, who was inside one of the RVs, was pronounced dead at the scene by the Garland County coroner after the collision which occurred shortly before 4:30 p.m. at the Lake Hamilton RV Resort, 3027 Albert Pike Road.

The 2018 Ford F-250 truck, driven by Daniel Chavez, 37, of Hot Springs, was reportedly traveling south on Thornton Ferry Road when it crossed left of center, exited the roadway on the north side at 173 Thornton Ferry, crashed through a fence and collided with a parked RV with Coburn inside.

The impact caused Coburn’s RV to collide with a second RV whose resident, Paula Paul, age not listed, was also inside. Both Paul and Chavez were injured in the wreck and transported by LifeNet to CHI St. Vincent Hot Springs for treatment.

The report notes conditions were clear and dry at the time of the incident which was investigated by Arkansas State Police. Piney Fire Department and Garland County Sheriff’s Office personnel also responded to the scene.

One person was killed and another injured Tuesday afternoon when a truck broke through a fence at Lake Hamilton RV Resort, 3027 Albert Pike Road, according to Pine Fire Chief Scott Miser.

The vehicle reportedly struck two RV campers after breaking through the fence, Miser said. The truck's direction of travel was not immediately known Tuesday. Piney was dispatched to the wreck at 4:23 p.m. and extinguished a fire in the truck.

The injured person, who suffered non-life threatening injuries, was transported to an area hospital. The driver of the truck was still being evaluated in an ambulance at the scene shortly after the wreck.

It was unknown Tuesday if the person who was killed was inside one of the RVs, along with the injured person.