Pennington to continue legacy at SAU 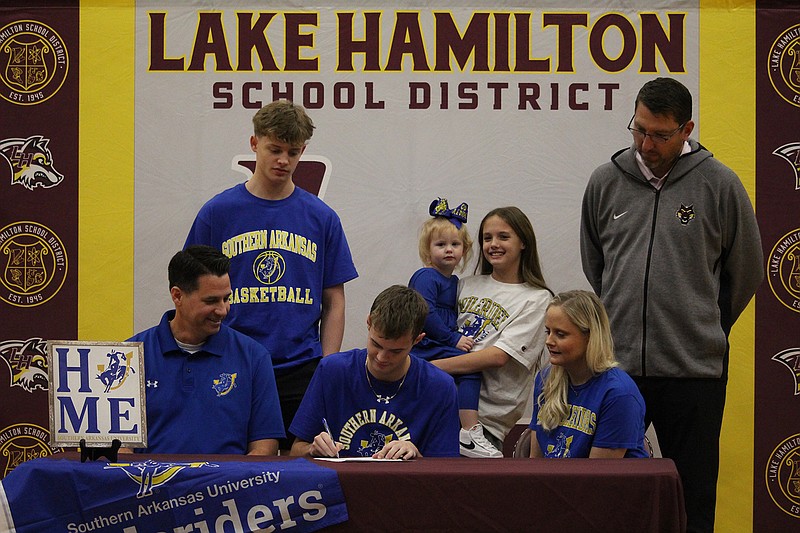 PEARCY -- It just made sense for Lake Hamilton's Zac Pennington to ink his national letter of intent to Southern Arkansas University.

His father, Lake Hamilton head basketball coach Scotty Pennington, attended SAU, and so did his mother.

"A big part of it was my parents both played there," Zac Pennington said. "Kind of like a legacy deal. The head coach there, he recruited me harder than anybody else. There was a connection there I didn't feel with any other school. It really wasn't a difficult choice."

The Lake Hamilton senior started absorbing everything he could about the game of basketball from birth. When he was just a newborn, he watched the movie "Hoosiers."

"When he was 2 years old he sat at my practice at Hot Springs High corner of the court crisscross applesauce for an hour and a half and never moved," Scotty Pennington said. "Just completely ingrained with what was going on. At that time I thought that was pretty neat. Thought that was pretty special for a 2-year-old to sit there that long and watch."

When he was just 5 years old, Zac Pennington would sit behind his dad's bench at Hot Springs High School.

"He could tell you what play that you just ran on the court," Scotty Pennington said. "I thought that was pretty neat, too, that a 5-year-old could watch the play being run on the court and be able to know it by name because he had been at my practice."

"I want to be a coach one day," Zac Pennington said. "So ever since I was little that's always what I've wanted to do. I enjoy that aspect as much or more than playing even. So I just love the strategy part."

When he was 12 years old, he told his dad he wanted to be pushed more so he could be a special player, and that mindset still exists in him today. He looks forward to the chance to improve at SAU.

"It's almost like a job," he said. "You're going to get a lot better because that's all you're doing all day long is playing basketball, working out. You're going to get better a lot easier than you are in high school so just the chance to improve."

"Shooting and for me, I'm not real big so IQ more than anything," Zac Pennington said about what he can carry over to the collegiate level. "Just knowing how to play, when to make the right pass, stuff like that. Because athleticism is not something that I'm ever really going to have over anybody else."

Zac Pennington still has his senior season left to play at Lake Hamilton, and the Wolves' roster is primed for a playoff run.

Lake Hamilton fell in the state semifinals last season to Marion 64-46 coming off a five overtime thriller in the quarterfinals against Parkview.

Zac Pennington has already made his mark on Lake Hamilton basketball, but there is one more thing he wants to add to his legacy as a Wolf.

"Hopefully a state championship," he said. "First one in 60 years I think. So hopefully bring back another championship here."