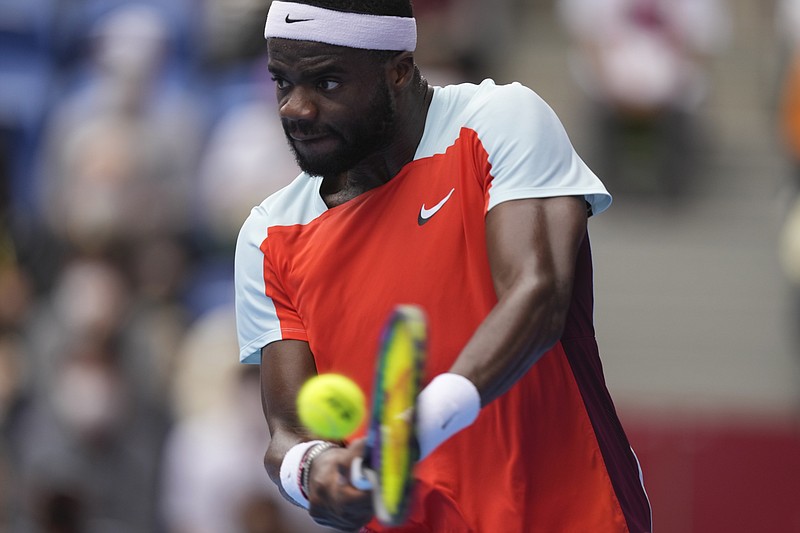 Frances Tiafoe of the U.S. returns a shot against Kwon Soon-woo of South Korea during their semifinal match in the Japan Open tennis championships in Tokyo, Oct. 8. Taylor Fritz and Frances Tiafoe have been making breakthroughs for themselves -- and for U.S. men's tennis -- all season and they'll try to take another step by earning the Americans' first Davis Cup title since 2007. - Photo by Hiro Komae of The Associated Press

Frances Tiafoe and Taylor Fritz spent 2022 achieving milestones for themselves -- and for U.S. men's tennis -- and now they'll try to take another step this week by earning their country's first Davis Cup title in 15 years.

"It's been a long time since we've had the team to get it done, and I think right now this is one of the better teams we've had. Hopefully this group of guys can put it together," said Tiafoe, who reached the U.S. Open semifinals in September.

"I really believe we can go out here and do something special," the 24-year-old from Maryland said in a telephone interview Monday. "We're missing Thanksgiving and all that -- and we're trying to make it worth it. We're definitely one of the better teams out there."

The closing rounds of the Davis Cup Finals are in Malaga, Spain; the quarterfinals begin Tuesday with Australia vs. Netherlands.

Croatia vs. Spain is Wednesday, and two of the biggest names in the sport are missing from that encounter: Spain is without 22-time Grand Slam champion Rafael Nadal and No. 1-ranked Carlos Alcaraz. Croatia's roster, meanwhile, features the only Grand Slam singles champion left in the competition, 2014 U.S. Open winner Marin Cilic.

The quarterfinals wrap up Thursday, when the U.S. meets Italy, and Canada plays Germany. The semifinals are Friday and Saturday, and the title will be decided Sunday. Each matchup involves two best-of-three-set matches in singles and one in doubles.

While Italy won't have either of its top two players because they're hurt -- 2021 Wimbledon runner-up Matteo Berrettini has a foot injury, and three-time 2022 Grand Slam quarterfinalist Jannik Sinner has a finger injury -- U.S. captain Mardy Fish's roster includes No. 9-ranked Fritz, who is coming off a run to the semifinals at the ATP Finals in Turin, Italy, and No. 19 Tiafoe, along with doubles specialist Jack Sock and Tommy Paul.

All four were a part of the Team World squad that beat Team Europe for the first time at the Laver Cup in September, with Tiafoe clinching the victory by beating Stefanos Tsitsipas.

No nation has won more Davis Cups than the United States, with 32 (Italy's lone title came in 1976).

The Americans' most recent triumph arrived in 2007, when Andy Roddick, James Blake and twins Bob and Mike Bryan defeated Russia in the final at Portland, Oregon, back in the days before the event's format switch made it so teams no longer get to host matches in each round.

"A lot of the players miss the home-and-away aspect. Playing on the road or playing at home -- having an entire arena either rooting for or against you -- made Davis Cup really special," Fish said, "but there's not a whole lot we can do about the format."

None of the current crop of U.S. players has claimed the Davis Cup, of course. Fish, though, was a practice partner on that 2007 team. But, he said, "even though I was a part of the process, I wasn't on the finals roster, and so I don't feel like I have won it, either." 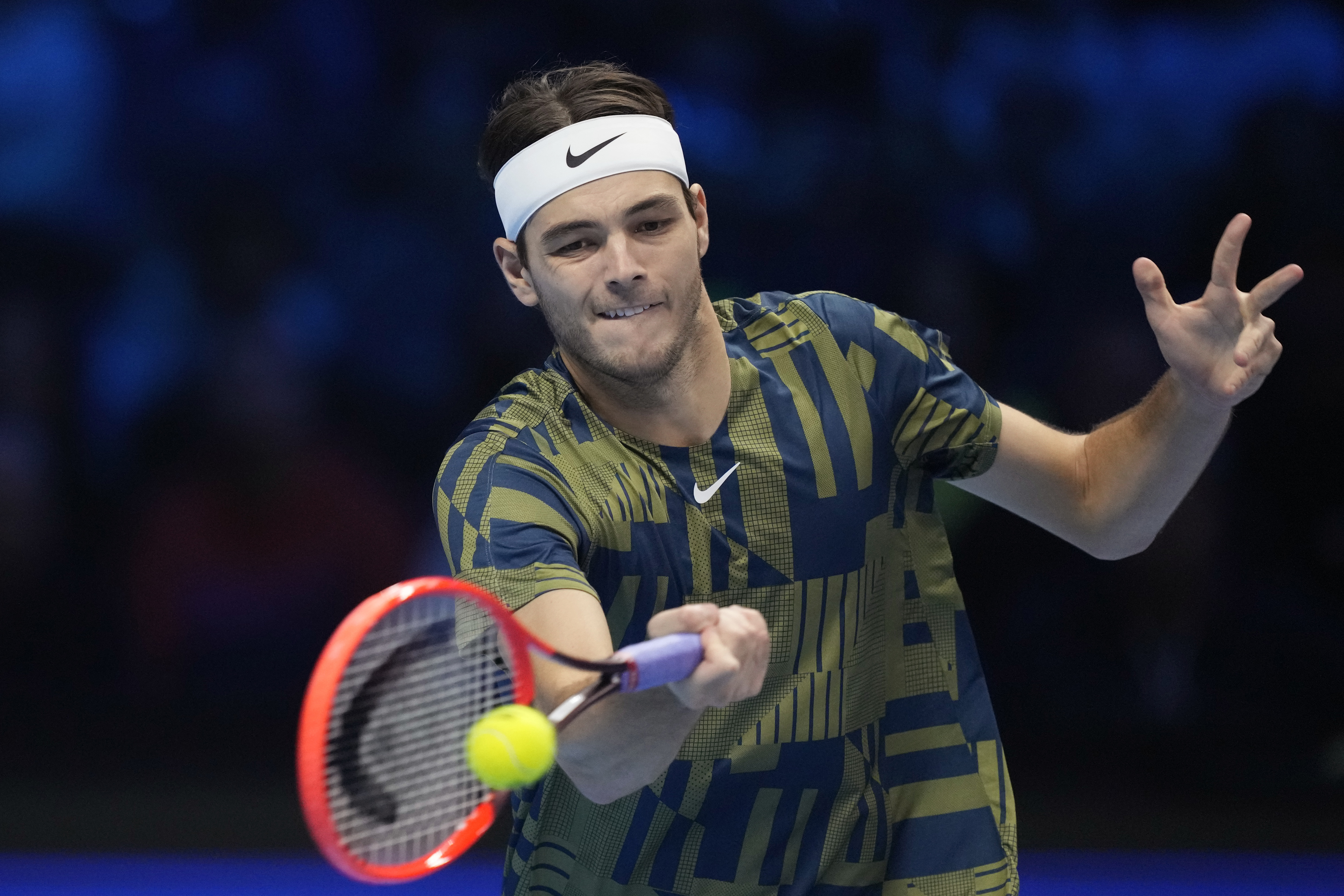 FILE - United States' Taylor Fritz returns the ball to Canada's Felix Auger-Aliassime during their singles tennis match of the ATP World Tour Finals, at the Pala Alpitour in Turin, Italy, Thursday, Nov. 17, 2022. Taylor Fritz and Frances Tiafoe have been making breakthroughs for themselves -- and for U.S. men's tennis -- all season and they'll try to take another step by earning the Americans' first Davis Cup title since 2007. (AP Photo/Antonio Calanni, File) 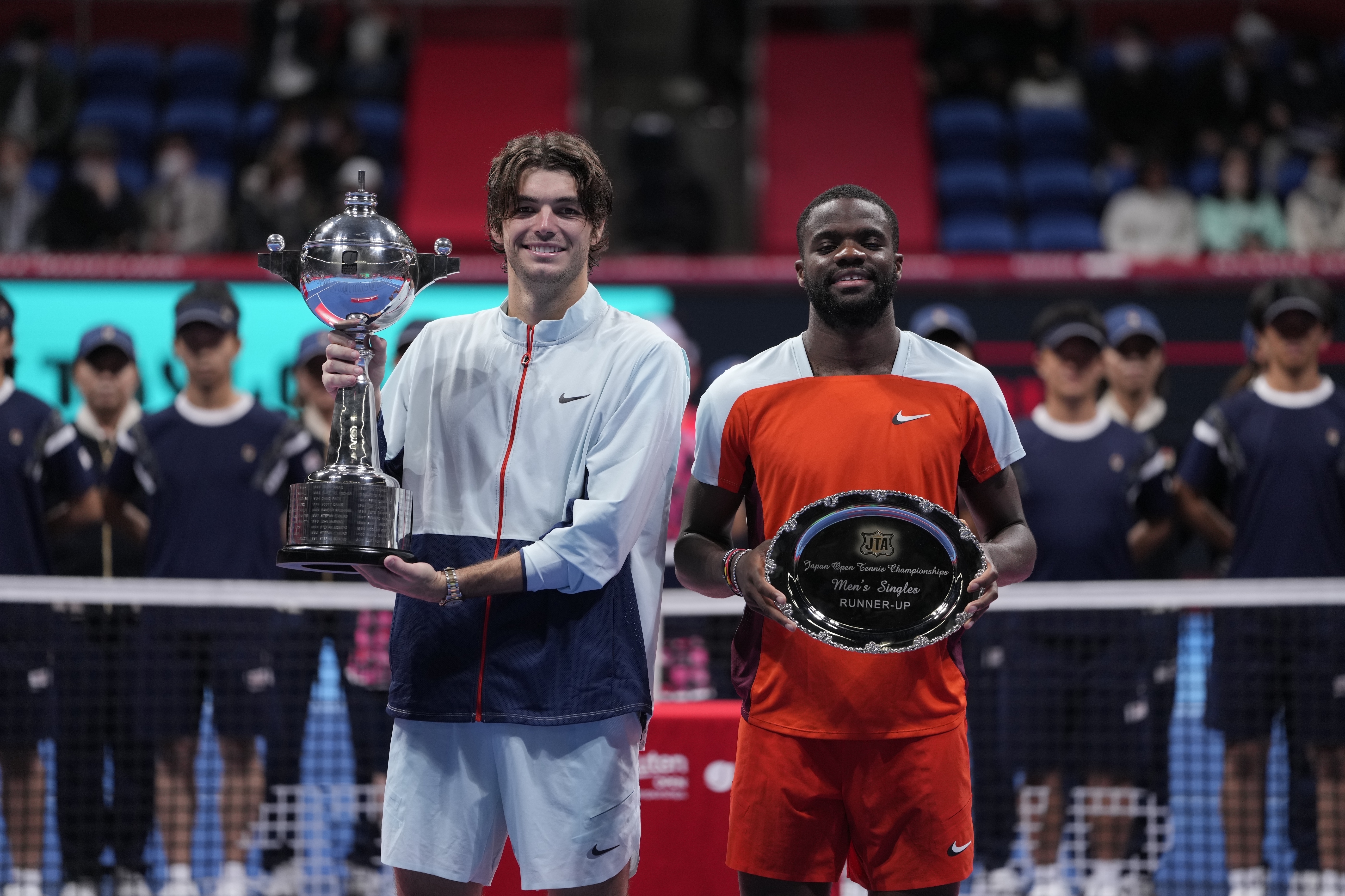 FILE - Taylor Fritz of the U.S., left, holds his champion trophy and Frances Tiafoe of the U.S. holds the runner-up trophy during the award ceremony for the singles winners of the Japan Open tennis championships in Tokyo, Sunday, Oct. 9, 2022. Taylor Fritz and Frances Tiafoe have been making breakthroughs for themselves -- and for U.S. men's tennis -- all season and they'll try to take another step by earning the Americans' first Davis Cup title since 2007. (AP Photo/Hiro Komae, File)

Print Headline: Taylor Fritz tries to give US 1st Davis Cup title since 2007