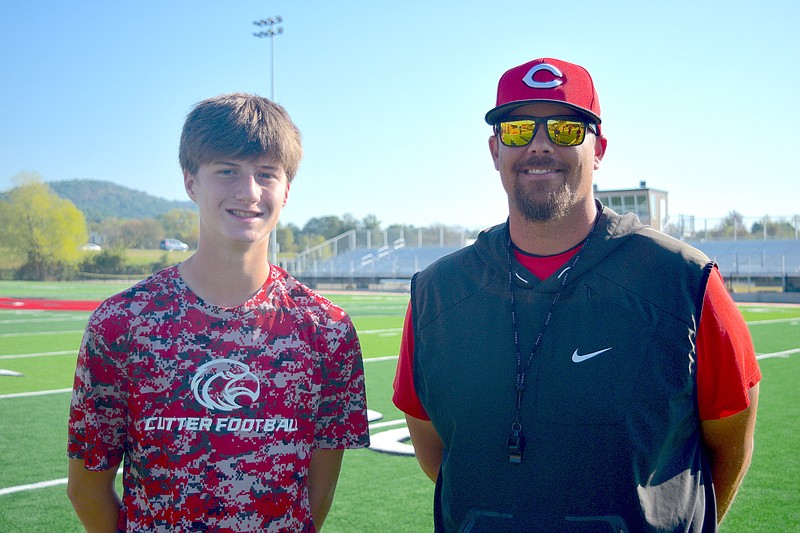 Despite a losing record in their second season of 8-man football, the Cutter Morning Star Eagles had success on the field.

In his first year, head coach Nick Finley brought a high-flying offense to a struggling program.

Senior tight end Clayton Weldon and sophomore quarterback Peyton Mills earned some giant accolades and set the tone for the Eagles this season.

Weldon is a 6-foot-4-inch tight end and wide receiver combo. He was a dominant deep threat for the Eagles.

Weldon put up 11 receptions for 275 receiving yards and three touchdowns in a 64-42 loss to Rose Bud.

"Weldon went off that game," Finley said. "He even had 47 yards rushing and a rushing touchdown for four total touchdowns in the game. He was over 300 total yards."

Weldon was ranked the No. 1 wide receiver in Arkansas 8-man football this season, averaging 132 yards per game.

Cutter Morning Star will miss Weldon being a dominant senior, and he will be hard to replace.

"The thing about that is there was a game where he was injured and we were able to still move the ball and score touchdowns and it kind of forced other guys to step up," Finley said. "There are some guys that can catch the ball and we have some guys coming from junior high."

Juniors Keith Collins, Isaiah Mahone and Jock Simpson, along with some new blood coming into the program, will be asked to fill the role Weldon leaves behind.

Scoring 13 total touchdowns and reeling in 50 catches for 921 yards, he was the No. 40 nationally ranked wide receiver for 8-man football.

This year's team made Cutter Morning Star football fun again and created a buzz on campus.

"We have some guys that did not play last year that are going to come out and earn their way on the team," Finley said. "Big key word is earned. They can possibly fill in that void left by Weldon with a little bit more speed and quickness."

Weldon has drawn the attention of some junior colleges for football next fall.

Weldon wasn't shy for contact this season, totaling 20 tackles on the year.

Weldon is entering his senior basketball season with the Eagles, posting a double-double in his recent game against rival Fountain Lake.

Weldon was helped by having a quarterback who could get him the ball anytime this season in Mills.

Mills is a 6-foot-2-inch transfer from Lakeside.

Cutter Morning Star stayed close with its opponents into the fourth quarter in most games the Eagles played this season, almost pulling off the upset at Cedar Ridge but losing 74-72 in a huge offensive shootout.

In the two-point loss to Cedar Ridge, Mills had a breakout performance passing for eight touchdowns.

A school can build programs around a player like Mills.

"No doubt, for a kid to play six games and put up almost 2,200 yards and average around 350 yards a game," Finley said. "The good thing is he got a shot to play and he felt very blessed to be able to do things and the kid worked hard. He has tons of talent. His older brother has been able to help him and not every kid has that. I think we can build around Peyton."

Mills is a gunslinger who threw for 2,122 yards and 23 touchdown passes in only six games played after eligibility issues with school choice.

After overcoming the transfer process, Mills stepped on the field for the Eagles and never hesitated to show what he was made of, completing 60% of his passes with only 10 interceptions.

"National 8-man rankings he is in the top 25," Finley said. "There are a lot of dudes when you look at the out of state stuff. I am really excited about Mills coming back and growing our program around him. He still has some stepping up."

Cutter Morning Star was on the cusp of victory throughout the season but just could not get over the hump.

Subiaco Academy came to Cutter Morning Star and bested the Eagles 34-28 in a thriller.

Mills threw for 323 yards and four touchdowns in the Subiaco Academy game.

He averaged 354 passing yards per game and just being a sophomore, he will have three more years to dazzle the Eagle faithful.

Mills' fellow All-Conference tight end was his favorite target. However, he spread his passes around well with three of his teammates snagging 20 plus catches on the season each.

Mills was an All-Conference quarterback and an honorable mention All-State player.

"I feel comfortable with our scheme," Finley said. "We can place anybody in there to be able to do some things. We are on track to have the most kids play football on the varsity level Cutter has had in the last 16 years. Being able to put a product out there and sling it around and be exciting, it draws attention and makes the game fun."

It is clear that Cutter Morning Star will be able to put up points with its quarterback returning next season as a junior to live up to the Eagles' tagline, "Be the Best."

"The goal is to go 11-man," Finley said. "That's why I was hired. There are other schools that want to stay 8-man. I think our community, our alumni and our administration want to see us get back to 11. I think we are in the right direction."

Finley's Eagles will look to build on the positive foundations they laid this season to be 8-man playoff bound next year.

"We are going into offseason with a goal of, 'Hey, we had a good start to what we are trying to implement but we did not win any games,'" Finley said. "We have a lot to prove, and that's what we are going to do. We are getting guys in offseason and making sure they have the right physicals so they can start rocking and rolling."