Food, family and football: Truly a time to be thankful 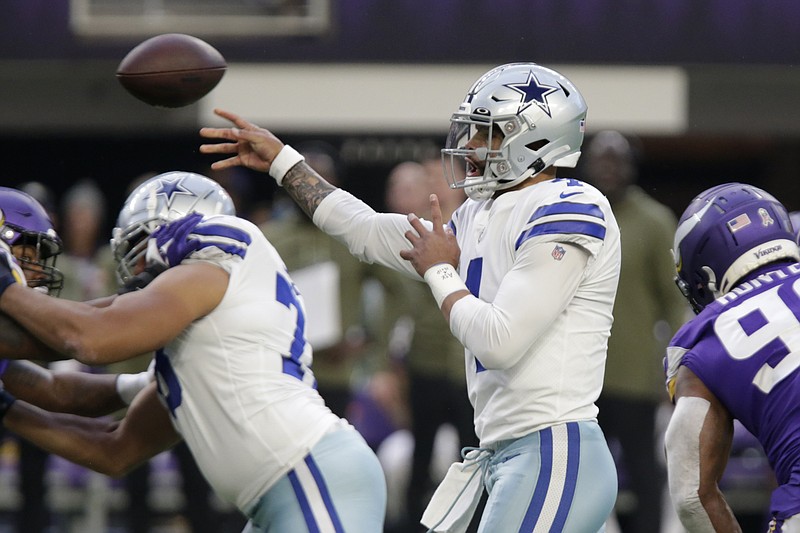 Dallas Cowboys quarterback Dak Prescott throws a pass during the first half against the Minnesota Vikings Sunday in Minneapolis. - Photo by Andy Clayton-King of The Associated Press

As you may know, the 3Fs in Thanksgiving are, in no certain order, food, family and football. And with generous helpings all around.

In its purest form, Turkey Day counts as much more as the unofficial opening of the Christmas shopping season. Black Friday, on which many retailers turn a seasonal profit, has become as much a part of shoppers' lives as Macy's Thanksgiving Day parade on TV was to mine.

After Christmas, of course, comes a year-end sale from every automobile dealer able to scream at a camera. Sometime after that come the 2024 model cars to replace the '23s. Did we mention financing?

Going at a feverish pitch since Labor Day, football teams enter their stretch runs. Though on a three-game win streak as of this writing, the Detroit Lions barely fit in that discussion. The National Football League team has not been king of the beast since they played in Tiger Stadium and Bobby Layne played quarterback, the former University of Texas star sometimes with liquid refreshment. The Lions, who haven't done much (or then) since Barry Sanders and Calvin "Megatron" Johnson played, are that rare team that has not appeared in a Super Bowl.

My memories of the Lions include a 5-0 playoff loss to Dallas' Super Bowl-bound team of 1970 and a holiday win over Vince Lombardi-coached Green Bay. Two key players from the 1962 game later were linked to betting on games and suspended by NFL boss Pete Rozelle for the 1963 season.

Rozelle's decision to play NFL games two days after John F. Kennedy was murdered in Dallas brought the commissioner greater criticism nationally than grounding Paul Hornung and Alex Karras, for which Sports Illustrated named Rozelle Sportsman of the Year in 1963.

Dallas, traditional mid-afternoon site of an NFL scrap on Thanksgiving, has seen some marquee games over the years. Some of the best involved the Washington Redskins, who lost the 1974 holiday game to a backup Cowboy quarterback, the immortal Clint Longley. A Dallas defensive player, not sold on Longley's skills, called it the "triumph of the uncluttered mind."

Miami was in town for the 1993 game, when defensive tackle Leon Lett, another who marched to a distant drummer, misplayed a fumble on an icy field in a Cowboy loss at old Texas Stadium, driving coach Jimmy Johnson to distraction. The same player cost himself a touchdown on a goal-line fumble in the previous year's Super Bowl, though it came in a Dallas runaway. Leon must have gotten things crossed up, trying to recover what wasn't a loose ball until he touched it, with shivering fans no doubt yelling "Lett it alone!"

Thanksgiving once was the annual setting for football classics home and away. High schools once played on the holiday with Hot Springs vs. Pine Bluff a leading attraction. So was the Battle of the Ravine, Henderson vs. Ouachita, and one year I remember the family leaving HSU's old Haygood Stadium amid efforts to find Texas vs. Texas A&M on the radio.

Arkansas switched its 1969 Little Rock game vs. Texas Tech to Thanksgiving for national TV. The Hogs gave Frank Broyles his 100th victory as a college head coach. Once Michigan topped Ohio State, the defending national champion, the Big Shootout, Arkansas vs. Texas at Razorback Stadium, was on. We'll spare you a synopsis -- until at least Dec. 6 -- but it was the last major college football game played between two all-white teams.

ABC was there for that one and also for the Nebraska-Oklahoma game of 1971, No. 1 vs. No. 2 again. Shaming the South with so many good Black players on display, the Huskers and Sooners fought that day, in the words of Nolan Richardson, until the general was dead.

Nebraska took away Oklahoma's power running but fell prey to the deep pass of Jack Mildren. Oklahoma generally neutralized Johnny Rodgers, a deluxe receiver and the next year's Heisman Trophy winner, but allowed a punt return to rate with Billy Cannon's (LSU vs. Ole Miss in 1959) and Ken Hatfield's (Arkansas vs. Texas in 1964) legendary runbacks. Jeff Kinney ran for four Nebraska touchdowns, the last one coming late, and the Huskers won 35-31. Dan Jenkins, writing for Sports Illustrated, praised gallantry on both sides while remarking how well college coeds handled their liquor.

I remember being in College Station, Texas, for the 1989 Arkansas-Texas A&M game in mid-afternoon. Story filed and checking with the newsroom before leaving Kyle Field (Arkansas winning the last Southwest Conference game coached by Hatfield), I learned that Dollarway tripped up Jerry Clay's second Lake Hamilton team in the playoffs. Lake Hamilton and the other local teams are idle tonight.

Clay's time, and that of the Wolves, came three years later with a Class 3A championship on an icy December night at Little Rock's War Memorial Stadium. Someone in Russellville, thinking I might drive up Arkansas Highway 7 after work, advised me to stay in Hot Springs.

Two days later, I met my beloved Sue, having introduced myself on Thanksgiving night (she in Mississippi, I back home) in what might be the longest telephone message ever recorded in Pope County. That was 30 years ago. Not only does a man usually outkick his coverage in marriage, he remembers birthdays, anniversaries and the like. If he's smart, he'll win the toss and elect to receive.

Print Headline: Food, family and football: Truly a time to be thankful