Prayers go on, sometimes out of sight, in high school football 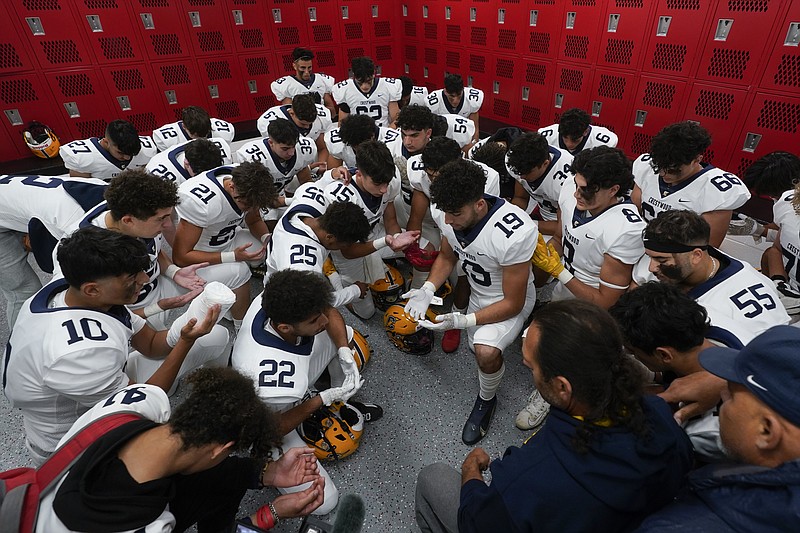 Forty yards down the sideline, three Muslim young men were having a quiet moment of their own.

Across America, most high school football seasons are winding down. Thousands of games, the first since the Supreme Court in June ruled it was OK for a public school coach near Seattle to pray on the field. The decision prompted speculation that prayer would become an even bigger part of the game-day fabric, though that hasn't seemed to be the case.

Fouad Zaban, the head coach at Fordson High in Dearborn, calls the area just outside Detroit the "Middle East of America" and it is indeed home to thousands of people of Arab descent. After the court ruling, Zaban said, he was flooded with requests to use his platform and constitutional right to pray publicly. After thinking about it, he chose to keep his team's prayers behind closed doors to avoid potential anti-Islamic jeers from fans in other communities.

"That was a concern that they were going to get backlash," Zaban said.

With the nation's culture wars spilling into education, it is challenging to have teachable moments about big news -- like a precedent-setting court ruling -- and coaches such as Zaban would rather punt than pray publicly.

"It's harder, whether you're a coach, librarian, teacher or counselor," said Lara Schwartz, an American University professor whose specialties include campus speech and constitutional law. "There are activist groups targeting books and ideas, saying you can lose your license if you have these conversations. That to me is a threat to people having good constructive dialogue in classrooms, or with coaches."

In Michigan, some teams with multiple religions represented on their rosters have found ways for everyone who wants to participate to do so if they wish.

"We don't force anybody to do that," said Ibe, the defensive line coach in West Bloomfield. "We just take that moment to really just come together and give glory to God at that moment."

At Crestwood High School in Dearborn Heights, where most of the football team is Muslim, the entire team gathers before practices and games to pray on one knee. First, most of the players recite Al-Fatiha. Then, a player says a Christian prayer to the attentive group.

"Between those two prayers, they're pretty much all the same," said Adam Berry, a senior and a team captain. "Asking God for protection, asking God for forgiveness, and asking God for any way to help us through our game."

Still, the team plays it safe at Fordson High, where coaches clear the locker room and leave players to pray if they wish.

"No one can ever say that we were involved in it," Zaban said, adding he just wants to coach instead of drawing attention.

Hassan Shinawah, a senior and team captain at Fordson, said players supported keeping their prayers in the locker room and away from the public. The only exception this season came when Senior Day festivities and pregame messages from coaches ran long and players gathered quickly on the field to pray before kickoff.

"We don't know if people are comfortable," he said. "We don't know what their opinions are about it. We just don't want any conflict with anybody else."

In the South, at least three high schools, two in Alabama and another in North Carolina, received letters in recent months from the Freedom From Religion Foundation. The nonprofit that advocates for atheists and agnostics said it fielded complaints about the promotion of religion surrounding football games. Jefferson County (Ala.) officials were asked to "ensure that its schools are no longer scheduling prayer at school-sponsored events, including football games."

The Associated Press left multiple messages for athletic directors and principals at the schools in both North Carolina and Alabama that were not returned.

Outside Detroit, coaches gave time and space for their players to pray, showing the teenagers that accomdations can be made for different faiths as well as the right to decline.

At West Bloomfield High, an assistant football coach once walked miles with a Jewish player -- whose faith would not allow him to ride in a car one particular day -- to make sure he got to his hotel after a road game. The unique nature of having Christians, Muslims and Jews playing on the same team was not lost on one of the players who participates in a pregame Islamic prayer.

"Some other teams, they probably don't have the same thing," said Mohamed Menisy, a 16-year-old junior offensive tackle. "We're one team, one family. We just respect each other." 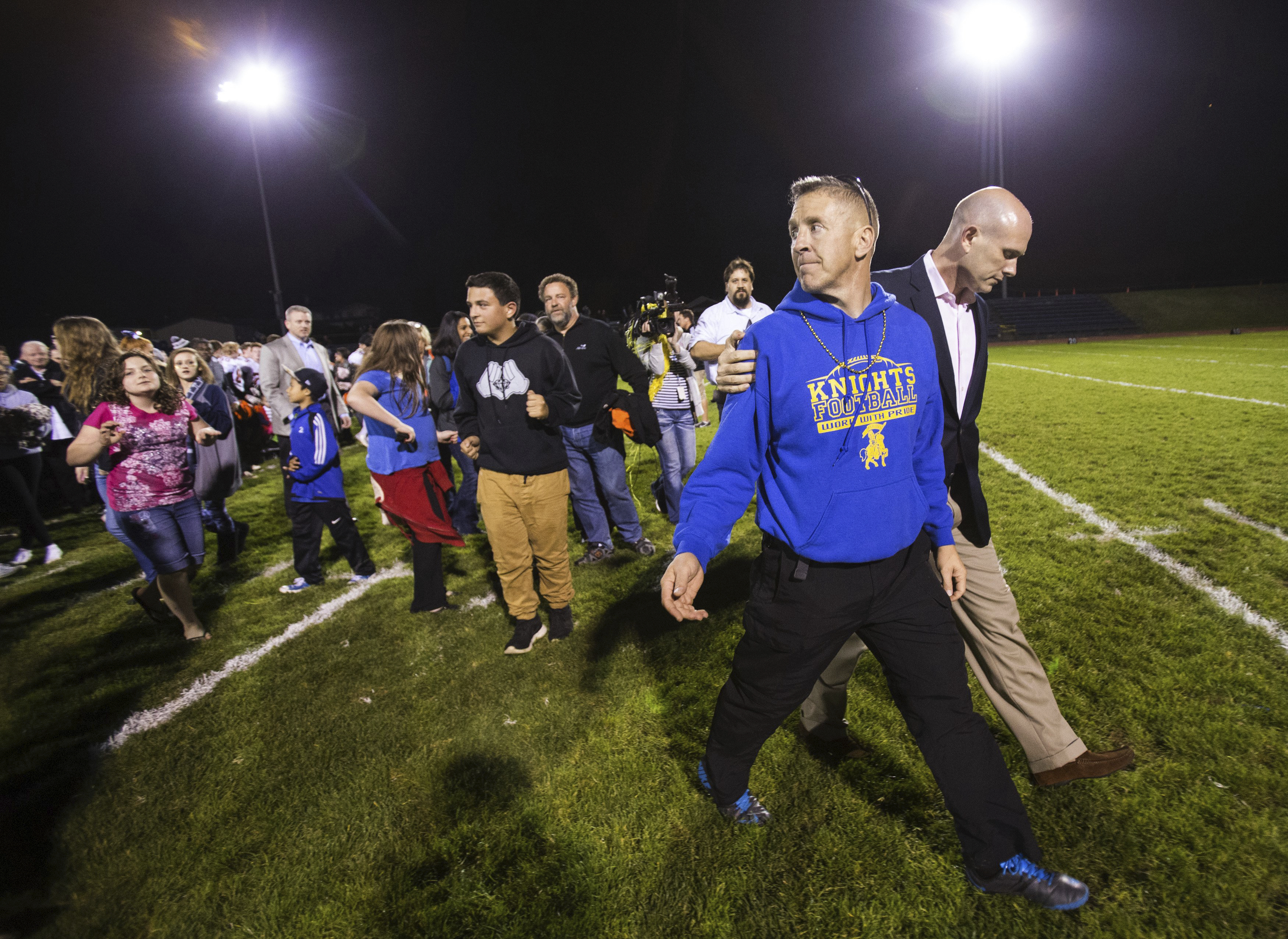 FILE - Bremerton High assistant football coach Joe Kennedy, front, walks off the field with his lawyer, right, Oct. 16, 2015, after praying at the 50-yard line following a football game in Bremerton, Wash. Across America, most high school football seasons are winding down. It will wrap up the first year since the Supreme Court ruled it was OK for a public school coach near Seattle to pray on the field. (Lindsey Wasson/The Seattle Times via AP, File) 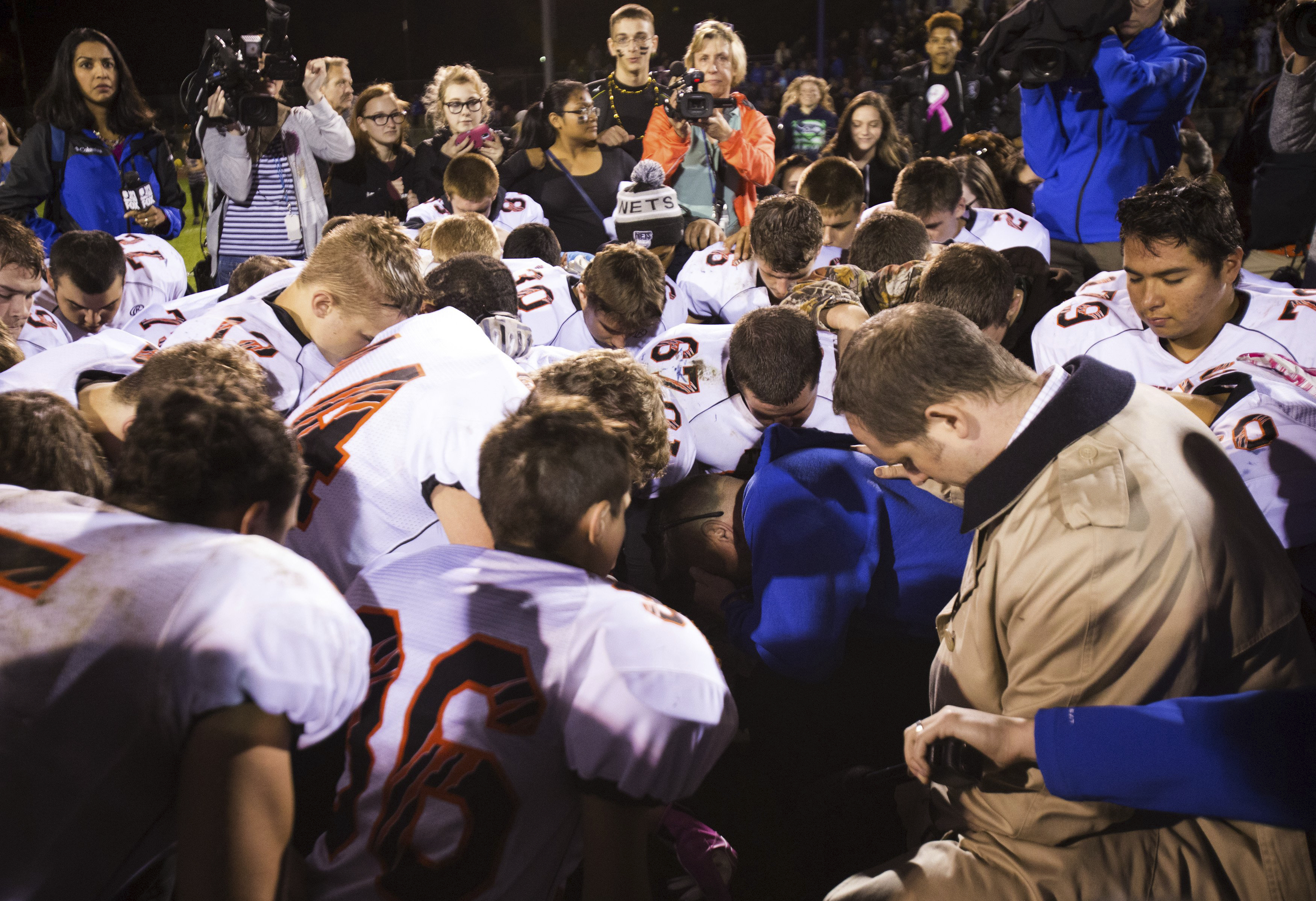 FILE - Bremerton High School assistant football coach Joe Kennedy, center in blue, kneels and prays after his team lost to Centralia in Bremerton, Wash., Oct. 16, 2015. Across America, most high school football seasons are winding down. It will wrap up the first year since the Supreme Court ruled it was OK for a public school coach near Seattle to pray on the field. (Lindsey Wasson/The Seattle Times via AP, File)

Print Headline: Prayers go on, sometimes out of sight, in high school football