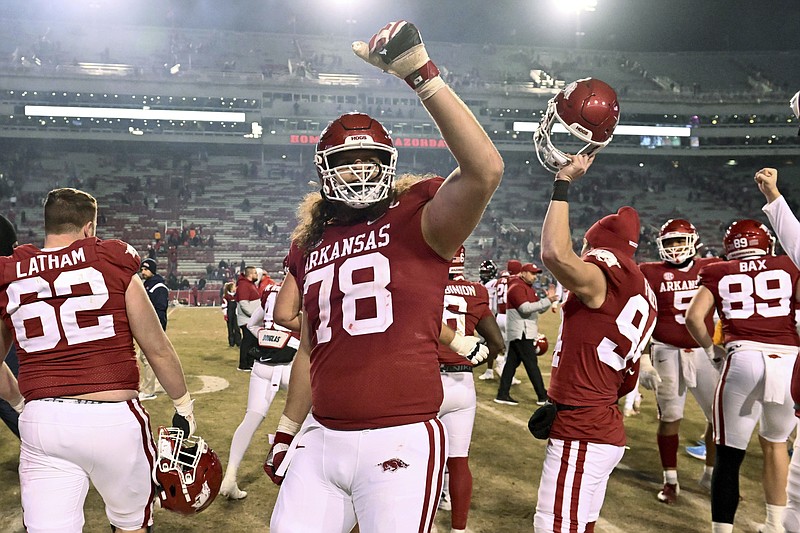 GAINESVILLE, Fla. -- It's rivalry week for most of the Southeastern Conference. The Egg Bowl. The Iron Bowl. The Palmetto Bowl. The Sunshine Showdown. Clean, Old-Fashioned Hate. The Battle Line Rivalry.

It's a chance for everyone to either avoid or add to the powerhouse league's recent chaos. Thirteen of 14 SEC teams -- everyone except Texas A&M (4-7) -- are eyeing various levels of postseason play.

Auburn, Missouri and Vanderbilt need upset victories to become bowl eligible. Given how games have unfolded the last two weeks -- South Carolina stunned Tennessee, Arkansas shocked Ole Miss and Vanderbilt upset Kentucky and Florida for consecutive SEC wins for the first time in four years -- no one should be surprised by any outcome this holiday weekend.

"I don't know if parity is the right word but having the ability to perform on a consistent basis," first-year Gators coach Billy Napier said. "We live in a time where you just see a lot of inconsistency. ... There's a number of challenges that come with roster attrition and retention, the addition of players, all those things that contribute to your stability of the program. Things can change dramatically in a hurry."

Several coaches are counting on it. Here's a look at where the SEC stands as teams jockey for postseason positioning:

Although the top-ranked and defending national champion Bulldogs have looked vulnerable at times, nothing short of losing to Georgia Tech and then LSU in the SEC title game would keep them from the College Football Playoff.

The sixth-ranked Tigers would make a strong case for the CFP with wins at Texas A&M and against Georgia in Atlanta. But coach Brian Kelly's team has been far from impressive on the road and is more likely to land in a New Year's Six bowl, the Sugar, Orange or Cotton.

The eighth-ranked Crimson Tide needs a few upsets over the next two weeks to sneak into the playoff for the eighth time in nine years. If not, it's likely the Sugar or Orange.

Unless the ninth-ranked Volunteers lose at red-hot Vanderbilt, they appear destined for the Sugar, Orange or Cotton.

The 20th-ranked Rebels look like a lock for the Capital One Bowl in Orlando, Florida, but losing a third straight game could put that in jeopardy.

The Bulldogs are likely to be among SEC teams in a pool for the ReliaQuest Bowl (formally the Outback Bowl in Tampa, Florida), the Gator Bowl (Jacksonville, Florida), the Music City Bowl (Nashville, Tennessee), the Texas Bowl (Houston), the Vegas Bowl (Las Vegas) and the Liberty Bowl (Memphis, Tennessee). Scratch the Liberty Bowl, since the Bulldogs went there last year.

One of those bowls would seemingly have to go outside the SEC if Auburn, Missouri and Vandy all lose.

A bowl trip to the Sunshine State (ReliaQuest or Gator) looks promising for the Gamecocks.

The Razorbacks should expect to something west of the Mississippi River, probably Texas or Vegas.

The Gators would prefer to stay close to home to help Napier's recruiting efforts.

The Tigers last won in Tuscaloosa in 2010 and enter this one as 22 1/2-point underdogs.

These Tigers already would be bowl eligible had they been able to pull out a one-score game against Auburn, Georgia, Florida and Kentucky.

"I'm not really worried about close losses or blowouts," Mizzou coach Eli Drinkwitz said. "That has nothing to do with this week. This week is about us playing our best game to win a rivalry game, and that's what matters to me."

No one wants to play the Commodores right now. Tennessee has to do it without quarterback Hendon Hooker (knee) and with Vandy trying to get to a bowl for the first time since 2018.

"We're aware of the fact that we have a chance to fight to extend our season," Vandy coach Clark Lea said. 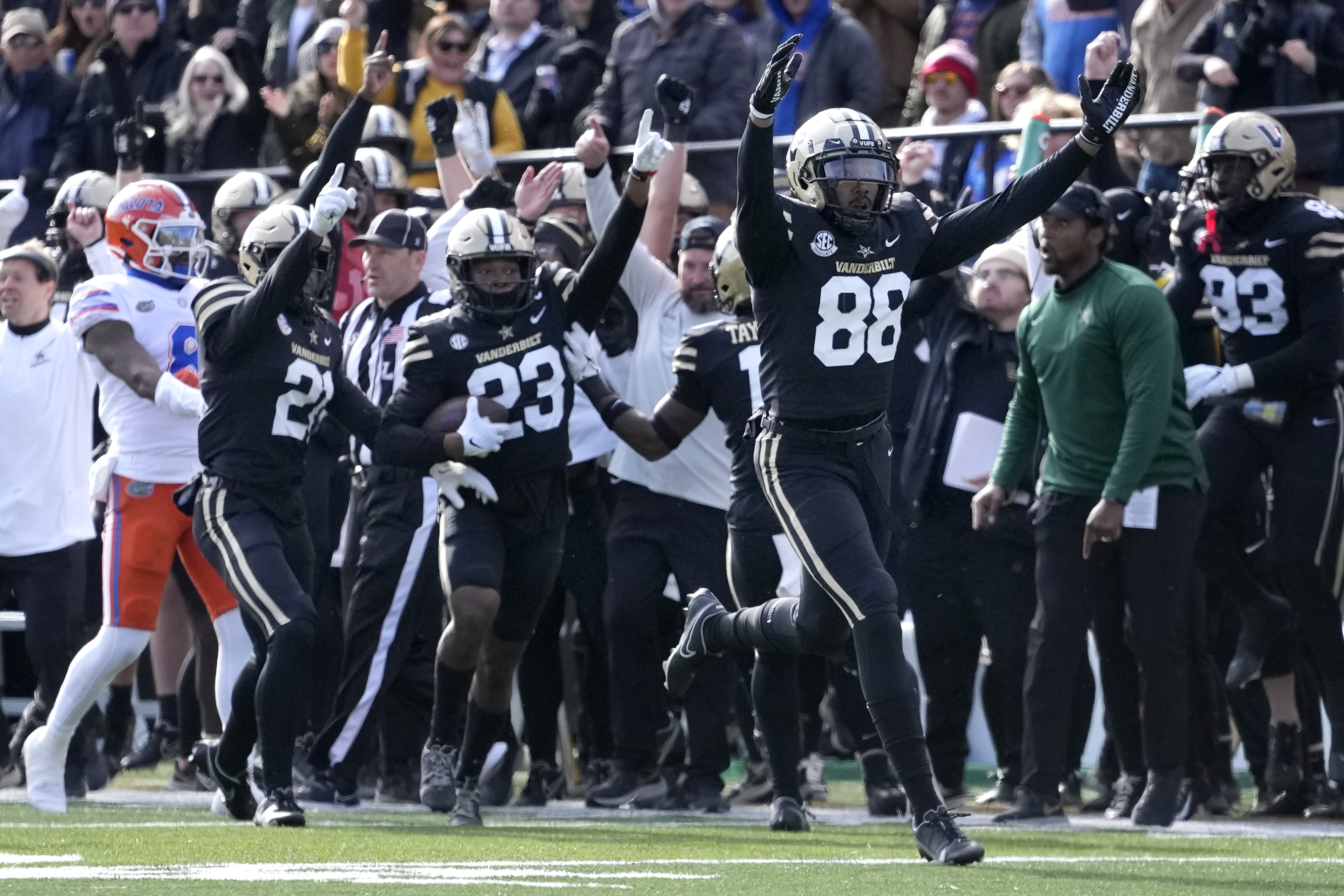 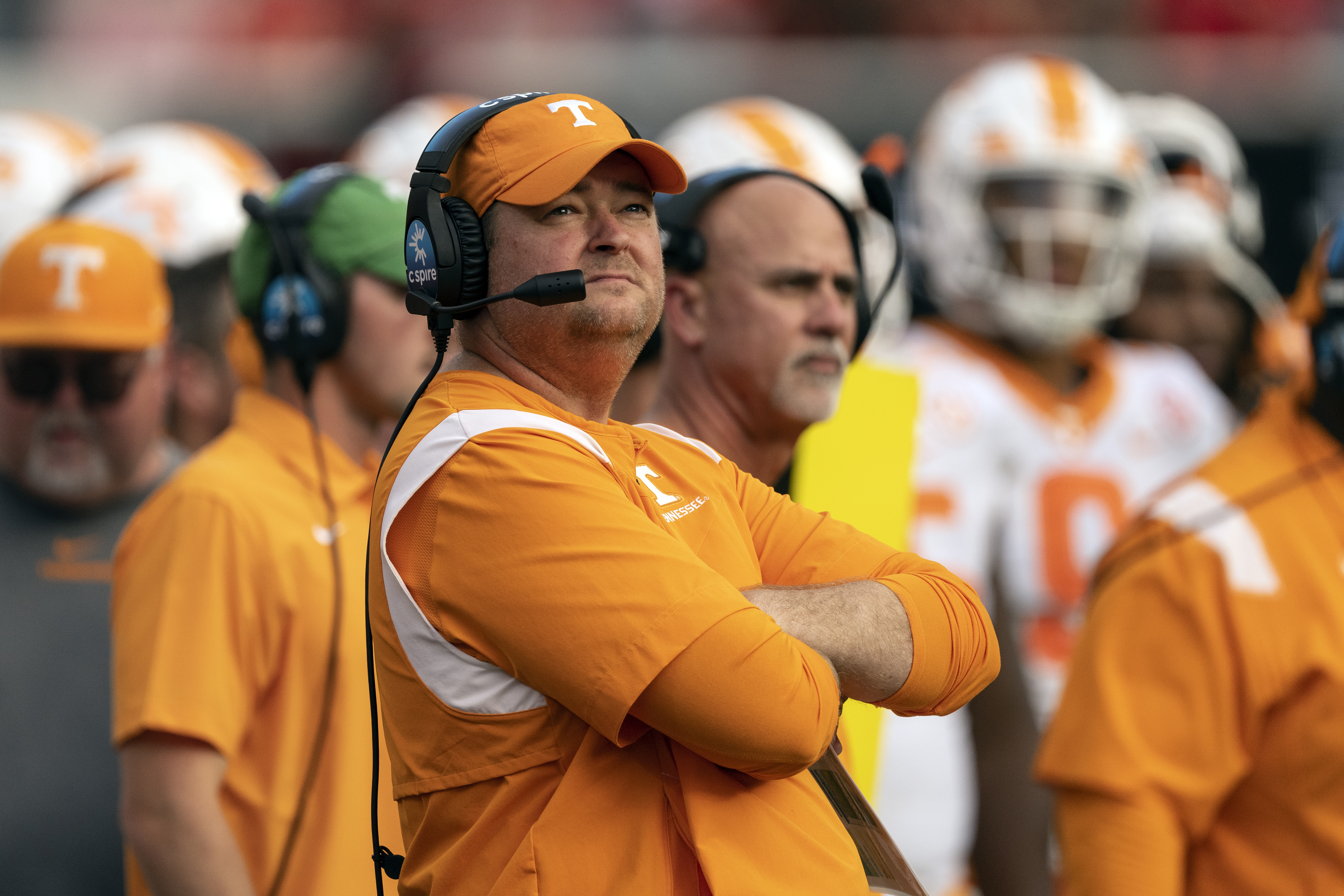 Tennessee coach Josh Heupel watches from the sideline during the first half of the team's NCAA college football game against Georgia on Saturday, Nov. 5, 2022 in Athens, Ga. (AP Photo/John Bazemore) 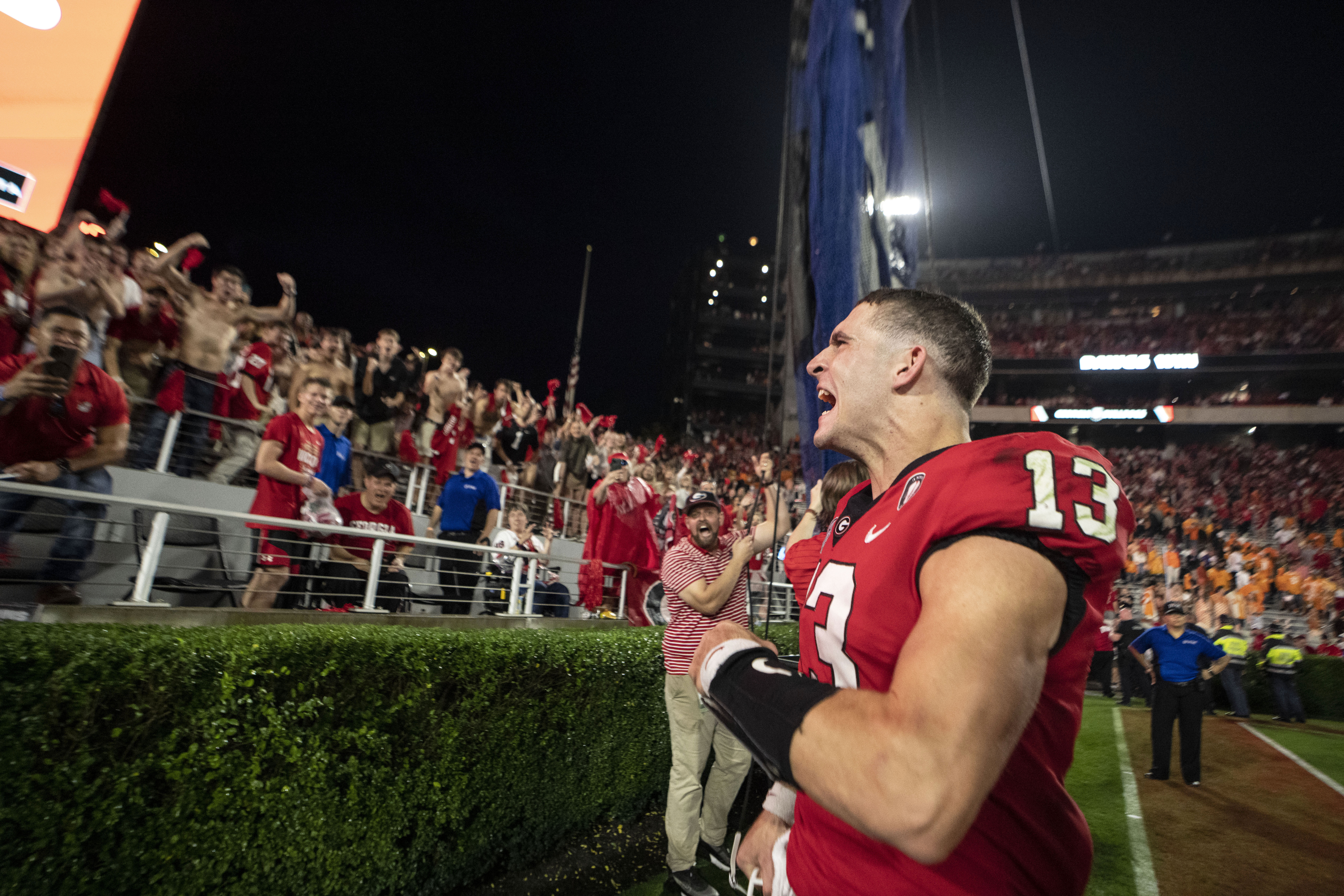 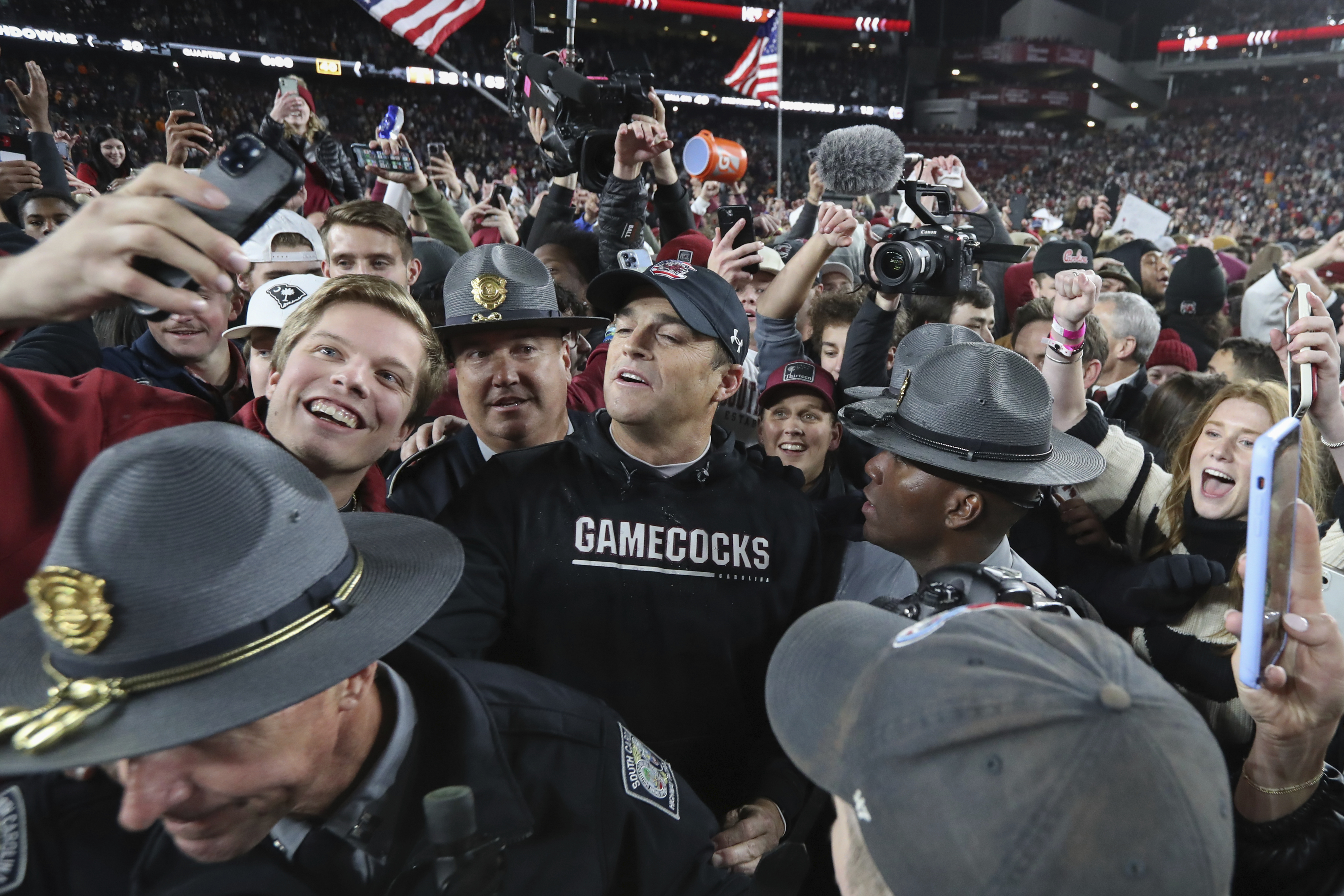 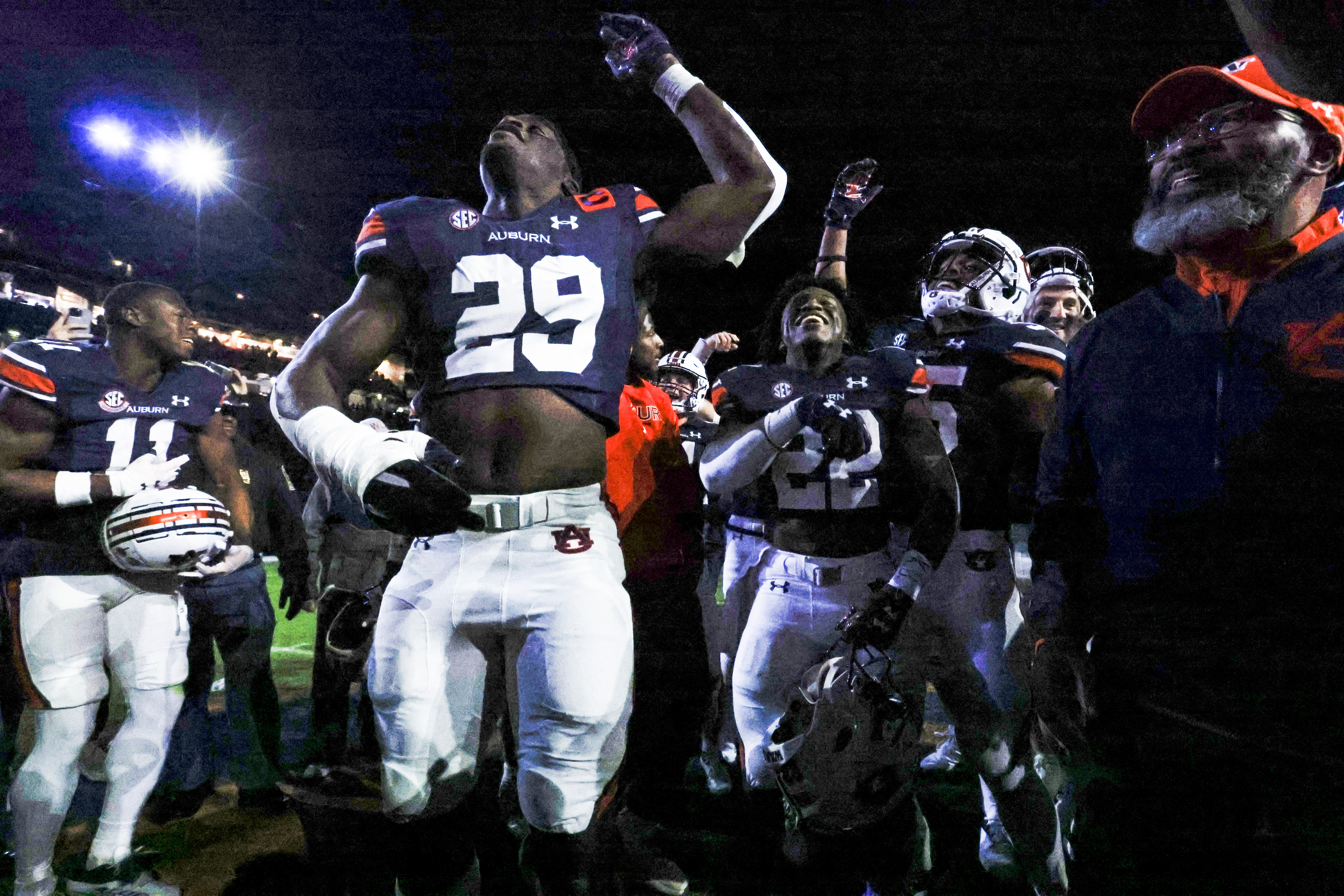 Auburn linebacker Derick Hall (29) celebrates with teammates after a win over Western Kentucky during the second half of an NCAA college football game Saturday, Nov. 19, 2022, in Auburn, Ala. (AP Photo/Butch Dill)