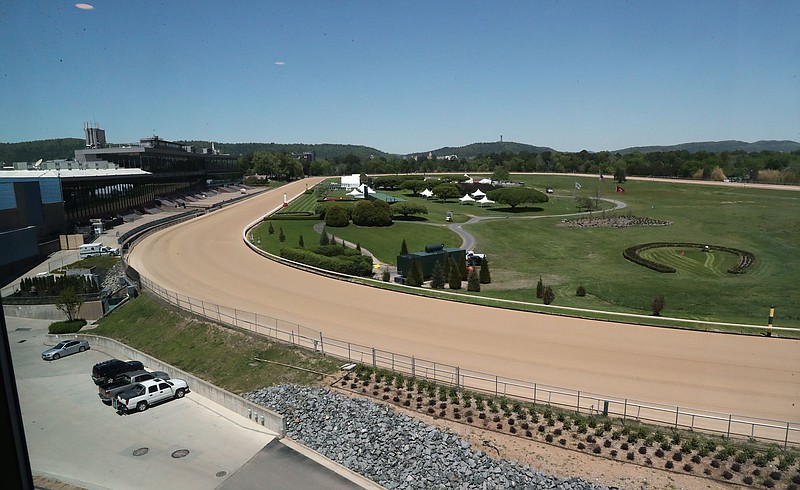 The view from a sixth-floor room floor at Oaklawn Racing Casino Resort’s new hotel. - File photo by The Sentinel-Record

A beaten mayoral candidate in his hometown this month, Little Rock horseman Steve Landers is throwing his hat into the ring for the 2023 Kentucky Derby.

A central Arkansas automobile dealer and Arkansas Racing Commission member, Landers is part of an ownership group with some promising 2-year-olds trained by Brad Cox. A Louisville native whose Cyberknife won the Grade 1 Arkansas Derby in April at Oaklawn, Cox won championships at 2 and 3 with Essential Quality, winner of the 2021 Belmont Stakes and Oaklawn's Grade 3 Southwest. A two-time defending Eclipse Award-winning trainer, he is considered a strong candidate for his first Oaklawn championship in the upcoming 2022-23 season, starting Dec. 9.

Cox has the Jan. 1 Smarty Jones at Oaklawn in mind for Giant Mischief's next start, also considering the Dec. 17 Springboard at Remington Park. Both are at one mile and offer 10-4-2-1 Kentucky Derby qualifying points. Cox won the Smarty Jones in 2020 with Caddo River, owned by Hot Springs lumberman John Ed Anthony, Oaklawn's career leader in races won by an owner.

Giant Mischief is sired by Into Mischief, a half-brother to champion racemare Beholder, and the first foal of multiple Grade 1 winner Vertical Oak. Giant Mischief's victory by three-quarters of a length over Bob Baffert-trained favorite Arabian Lion, 3-5 favorite in a $160,000 allowance race Nov. 4 at seven furlongs at Keeneland, scored highly on Derby radar screens. It was 17 1/2 lengths back to third-place finisher Old Alliance.

Enhancing the victory was Giant Mischief's ThoroGraph performance, adjudged the fastest juvenile race of Breeders' Cup weekend at Keeneland. On a scale in which lower numbers are better, Arabian Lion, with a wider trip, received a 3/4 while Giant Mischief earned a 2 and Forte, the Breeders' Cup Juvenile winner for trainer Todd Pletcher, went longer for 2 1/2.

"It's a bunch of Brad Cox clients that were looking for some more Triple Crown action," Weisbord told bloodhorse.com writer Bob Ehalt in a midweek feature. The group bought 23 yearling colts in 2021 and a 2-year-old earlier this year, an $8-million venture with 10 owners.

"It takes a while to get something like this going," Cox said in the Bloodhorse story. "We haven't had a lot of runners, but the ones that have run are making good debuts."

Giant Mischief, for one, caught the eye of Arabian Lion and Arabian Night trainer Bob Baffert, the latter horse prominent in Derby talk after a Nov. 5 Keeneland maiden victory. "Brad's horse looked real good in the paddock," said Baffert, a six-time Kentucky Derby winner. "I could see he was the one we had to beat."

Loggins passed on the Breeders' Cup after missing by a neck in the Breeders' Futurity at Keeneland, one of Forte's three Grade 1 wins. Loggins, by Ghostzapper, is 40-1 in Kentucky Derby Future Wager Pool 2 this week; Cox eyes a return at Fair Grounds, where Cyberknife won before coming to Oaklawn.

Giant Mischief is 25-1 in Pool 2, with Forte entered as 10-1 individual favorite and other 3-year-olds and geldings besides 38 solo choices were tabbed the 3-5 chalk. A separate selection finds 3-year-old fillies at 80-1, same win-pool odds on 2022 Kentucky Derby upsetter Rich Strike. Only three fillies have won the race, none since Winning Colors in 1988.

Cox goes for his second Kentucky Derby victory but first outright. Mandaloun was declared the winner in 2021 after the late Medina Spirit failed a drug test. Baffert's record seventh Derby victory was thus scrubbed and the Hall of Fame trainer ruled off Churchill Downs through the 2023 spring classic. He last won the Derby in September 2020 with future Horse of the Year Authentic after Tiz the Law won a shortened Belmont Stakes, though run as usual in June, in the pandemic season.