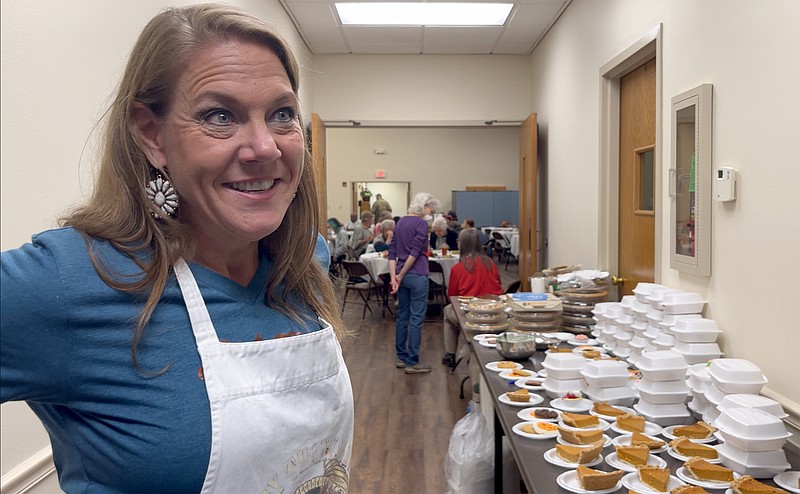 Tonja Bolding, the organizer of the 25th annual Thanksgiving meal at Grand Avenue United Methodist Church, talks about the event and its history Thursday. - Photo by James Leigh of The Sentinel-Record

Grand Avenue United Methodist Church's annual Thanksgiving meal saw a return to in-person dining for the first time since 2020 as the COVID-19 pandemic led organizers to limit the last two years to carryout meals only.

With the event celebrating its 25th anniversary, spirits were not dampened by the heavy rains that fell throughout the day.

"There's been a lot of thank yous as people have gone through the line," Tonja Bolding, one of the founding organizers of the event, said. "You know, 'Thank you for being here.' Of course, with the weather bad today -- I know that they're offering meals downtown, but they don't have the shelter aspect that we have by having them come in. So I think that was a blessing for some that don't have secure shelter. They have a place to come in, so that's been really good for those."

Bolding was one of three people who helped organize the original event in 1997.

"The main idea was more than just to feed bellies; it was to reach out to our community because when we started there were very few, if any churches, that started it," she said. "We had a woman in our church that just felt like that was in her heart, and she wanted to reach out to our community and feed the people that were here, but also just have people come in and have a place to fellowship and talk to someone, especially a lot of our homeless that don't have a lot of interaction. ... It was her vision, and we kind of made it come to pass."

The event served dine-in meals starting at 11 a.m. before allowing carryout meals starting around 12:30 p.m. The annual meal has become the Bolding family's Thanksgiving, she said.

"I have done it every year for 25 years," she said. "My children were 3 and 6, and now they're 28 and 31. My daughter is here today. Thanksgiving to our family is serving here at Grand Avenue."

Over 25 years, the event has changed and grown, and Bolding has a notebook that she updates each year with recipe tweaks, mistakes to avoid, and more.

"I have a notebook that I just -- I make changes, you know, as things change," she said. "If I need to change quantities, I'll kind of sit down, and, you know, tweak it a little bit here and there. The companies have changed. Sysco doesn't provide the same potatoes anymore, so I have to sometimes go in and kind of change our recipe because it doesn't work with whatever new products. We had a few shortages this year. We weren't able to get our chicken broth, so I had to go and get that at Sam's, so sometimes I just noticed that supplies some years are different."

The first year saw a costly mistake as the refrigerator was overworked and died.

The church no longer keeps any food that is not served.

"If we have anything left over, we either take it to Samaritan's Ministries, the men's ministry, or we take it to Potter's Clay," Bolding said. "So we don't store anything that's leftover anymore, so that is probably been a good change."

With 200 pounds of turkey, four cases of green beans, four cases of sweet potatoes, and 12 "industrial-size pans of dressing," it takes several days to get all the food prepared. Bolding said food preparation usually starts Monday, and it takes about 20-25 volunteers between preparing and serving the food.

"That doesn't even count the people that just slip in with pies," she said. "We have a lot of people that just you know, will just slip in and leave four or five pies, or someone will call and say, 'I don't want y'all to be short. They'll leave 10 pies. We've already had people that will leave donations because not everyone that comes is in need financially, but they're just in need of camaraderie, someone to be around, so a lot of times people will give us a donation, which is very nice, because then we can turn around and put it back into our meal." 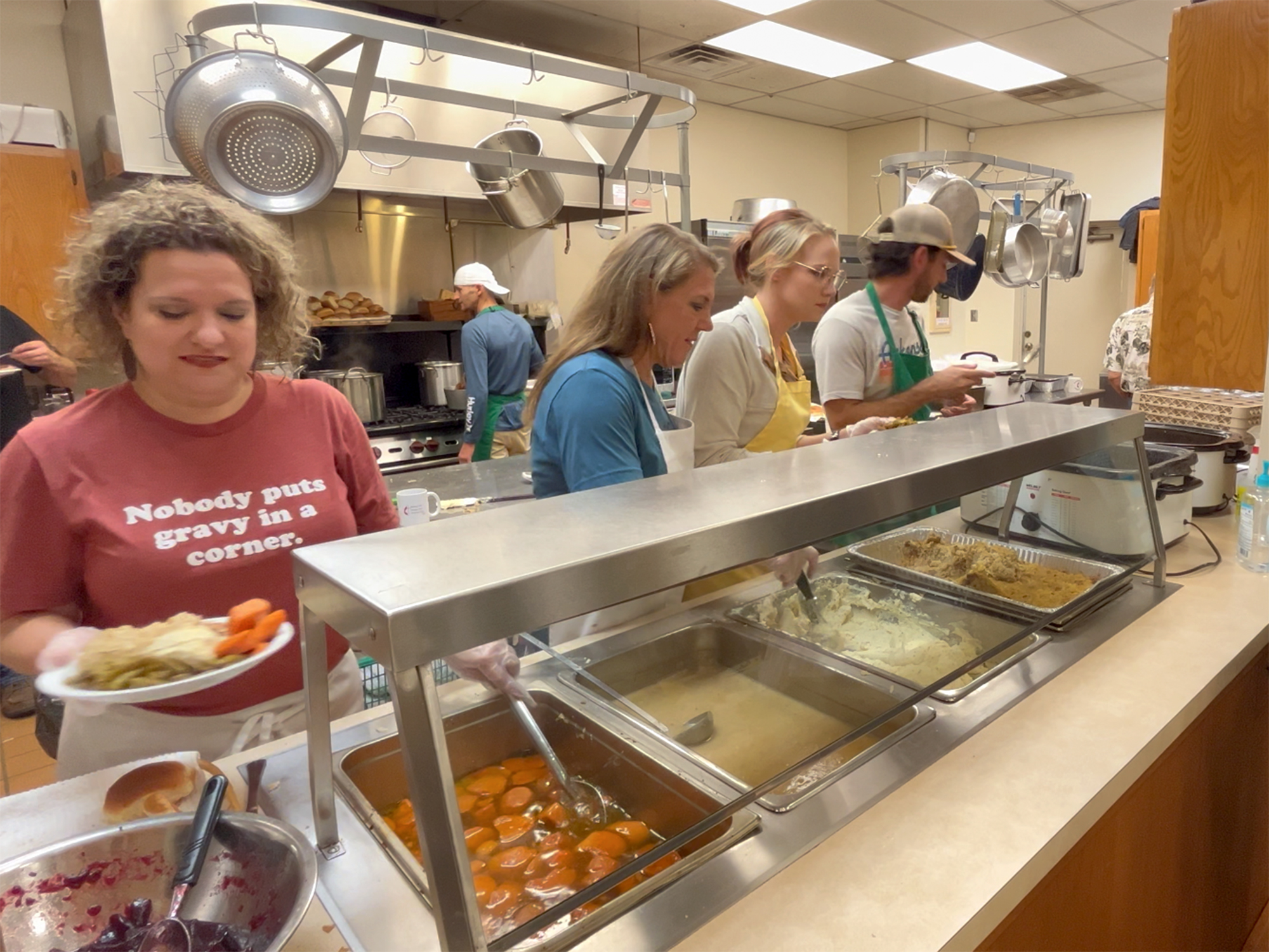