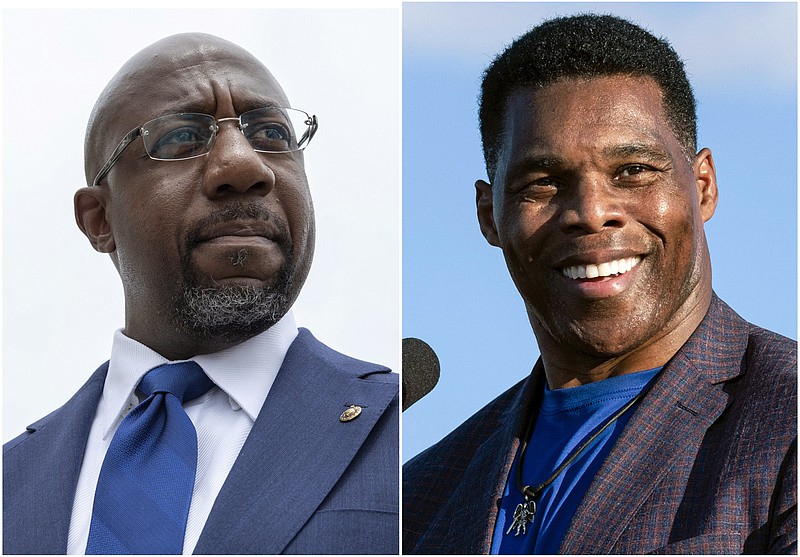 WARNER ROBINS, Ga. -- Ads with the candidates' ex-wives. Cries of "liar" flying in both directions. Stories of a squalid apartment building and abortions under pressure. Questioning an opponent's independence. His intellect. His mental stability. His religious faith.

The extended Senate campaign in Georgia between the Democratic incumbent, Raphael Warnock, and his Republican challenger, football legend Herschel Walker, has grown increasingly bitter as their Dec. 6 runoff nears. With Democrats already assured a Senate majority, it's a striking contrast from two years ago, when the state's twin runoffs were mostly about which party would control the chamber in Washington.

"Herschel Walker ain't serious," Warnock told supporters recently in central Georgia, saying that Walker "majors in lying" and fumbles the basics of public policy. "But the election is very serious. Don't get those two things confused."

Walker casts Warnock, the senior pastor at Ebenezer Baptist Church, as a "hypocrite" and servile to President Joe Biden. Underscoring the insult, Walker calls the incumbent "Scooby-Doo," complete with an impression of the cartoon hound's gibberish.

The broadsides reflect the candidates' furious push in the four weeks between the Nov. 8 general election and runoff to persuade their core supporters to cast another ballot. For Walker, it also means drawing more independents and moderates to his campaign after he underperformed a fellow Republican on the ticket, Gov. Brian Kemp, by 200,000 votes.

Warnock led Walker by 37,000 votes out of almost 4 million cast in the first round, but the senator fell short of the 50% threshold needed to avoid a runoff.

In many ways, the shift from his first runoff campaign is exactly what Warnock wanted: a straightforward choice between two candidates. Two years ago, then-President Donald Trump, fresh off his defeat, and Biden, then president-elect, made multiple Georgia trips to illuminate the national stakes of the races between Warnock and Republican Sen. Kelly Loeffler and between Democrat Jon Ossoff and Republican Sen. David Perdue as control of the Senate hung in the balance.

Trump ended up alienating his own supporters and many moderates with his false claims of a rigged 2020 presidential election. Victories by Warnock and Ossoff put the Senate at a 50-50 split, with Democrats gaining control by virtue of Vice President Kamala Harris' tiebreaking vote. Warnock also became Georgia's first Black senator.

This year, with Warnock vying for a full six-year term after winning the 2021 special election, Democrats have already guaranteed control of the Senate by flipping a seat in Pennsylvania. A Warnock win would give Democrats an outright majority at 51-49, meaning that the parties would not have to negotiate a power-sharing agreement.

Warnock's preferred emphasis for most of his reelection bid has been his deal-making in Washington and the personal values he brings to the job. It took until the campaign's final stages -- only after two women accused Walker, an opponent of abortion rights, of encouraging and paying for their abortions -- for the senator to ratchet up his attacks, arguing Walker is "unprepared" and "unfit" for the job.

"My opponent lies about everything," Warnock said in a recent campaign stop, ticking off a litany of Walker's repeated falsehoods and exaggerations. "He said he was a police officer. He's not. He said he worked for the FBI. He did not. Said he graduated from the University of Georgia. He did not. Said he was valedictorian of his class. He was not. ... He said he had another business with 800 employees. It has eight."

Walker, alternately, has relished the jousting since he won the GOP nomination in the spring.

"Herschel is a competitor. He's very comfortable with the mano a mano," said Scott Paradise, Walker's campaign manager, noting the candidate's athletic prowess as a football running back, kickboxer and Olympic bobsledder.

Indeed, Walker takes his attacks right to Warnock's strengths as the pastor of the famous church where Martin Luther King Jr. once preached. Walker has criticized Warnock over an Atlanta apartment building, owned by a foundation of Warnock's church, where residents have complained to The Washington Free Beacon, a conservative media outlet, of eviction notices and poor conditions.

"What he's doing in this apartment building at Columbia Towers is not right," Walker said recently at a suburban Atlanta campaign stop. "You shouldn't put Jesus' name on what you're doing to people, and don't put Martin Luther King name on it. ... You're not Jesus, and you're not Dr. King."

Warnock, who says no residents of Columbia Tower have been evicted, incorporates Walker's attacks into the list of the challenger's documented exaggerations and falsehoods. "What kind of a person lies on the church?" Warnock said in Macon. "This isn't the first time people attacked Ebenezer Baptist Church. They attacked Martin Luther King Jr. I'm in good company."

Still, asked whether he's reconsidered his church's stewardship of Columbia Towers, Warnock sidestepped: "I've already answered the question. I'm proud of what my church does to feed and house the hungry and the homeless every single week."

Walker also accuses Warnock of "getting rich" as a senator, a nod to the pastor's $7,500-a-month housing allowance from the church. The payments are not a violation of Senate ethics rules that limit senators' outside income.

On at least one occasion during the runoff, Walker has suggested Warnock is a negligent father. Warnock told The Atlanta Journal-Constitution the comment "crossed a line." Earlier in the campaign, Walker publicly acknowledged three of his children for the first time, doing so only after The Daily Beast reported on their existence. Warnock has not mentioned those children in any of his critiques of Walker.

Walker, meanwhile, has not taken reporters' questions at an open campaign event since late October, when a second accuser came forward to say he had pressured her to have an abortion -- a contradiction of his advocacy as a candidate for a national ban on all abortions. Walker has denied the women's claims.

Both candidates' former wives also loom in the campaign, though the two men avoid the topic themselves, leaving the discussion of their marriages mostly to paid advertising. In one ad, Warnock's former wife tells Atlanta police that he ran over her foot. The Republican ad doesn't note that a police report states that officers found no physical evidence supporting her claim. A Democratic ad features an interview with Walker's first wife detailing that he threatened violence against her, circumstances Walker has confirmed in an autobiography.

Since the two men met for their lone debate Oct. 14, Warnock has hammered Walker for a lack of policy details and sometimes flubbing what policy he does discuss.

"Maybe he ought to apply to be a dietician. I'm running for the United States Senate," Warnock said in Macon.

He pounced when Walker declared the United States is "not ready" for climate action and should "keep having those gas-guzzling cars" that he said already have "good emissions" standards. Warnock added gleeful mockery when Walker recently introduced a tangent about vampires to a campaign speech.

"I mean, who says that kind of stuff?" Warnock asked supporters.

Warnock's aides say that the personalized arguments help convince core Democrats that they should not sit out the runoff, while also swaying the potentially decisive middle of the electorate in the senator's favor. "Herschel Walker continues to be bogged down by his pattern of lies and disturbing behavior, all of which led him to underperform" in the first round, said Quentin Fulks, Warnock's campaign manager, in a statement.

"We're certainly going to continue to aggressively prosecute the case against Warnock," he said, "and I suspect they'll do the same." 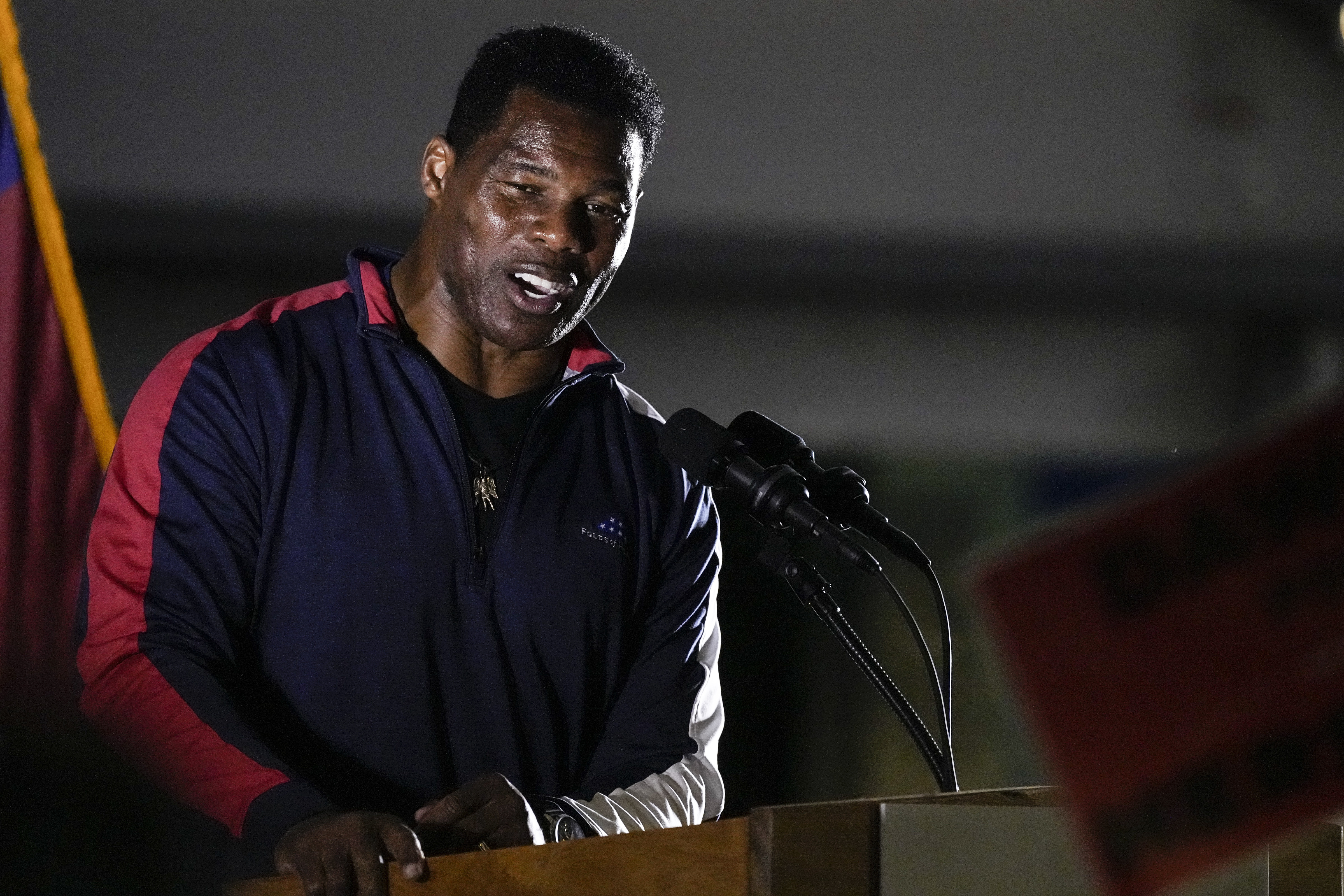 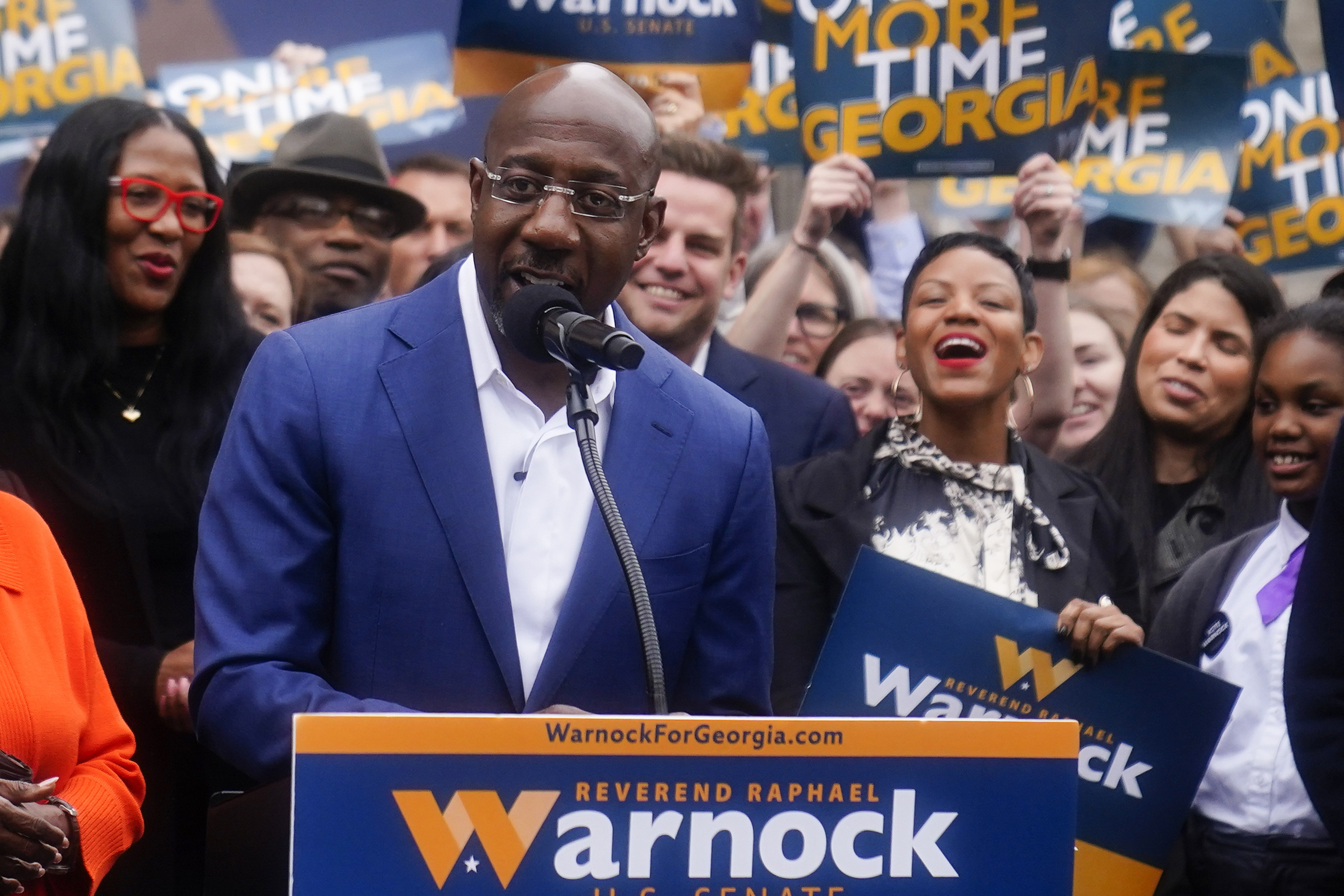 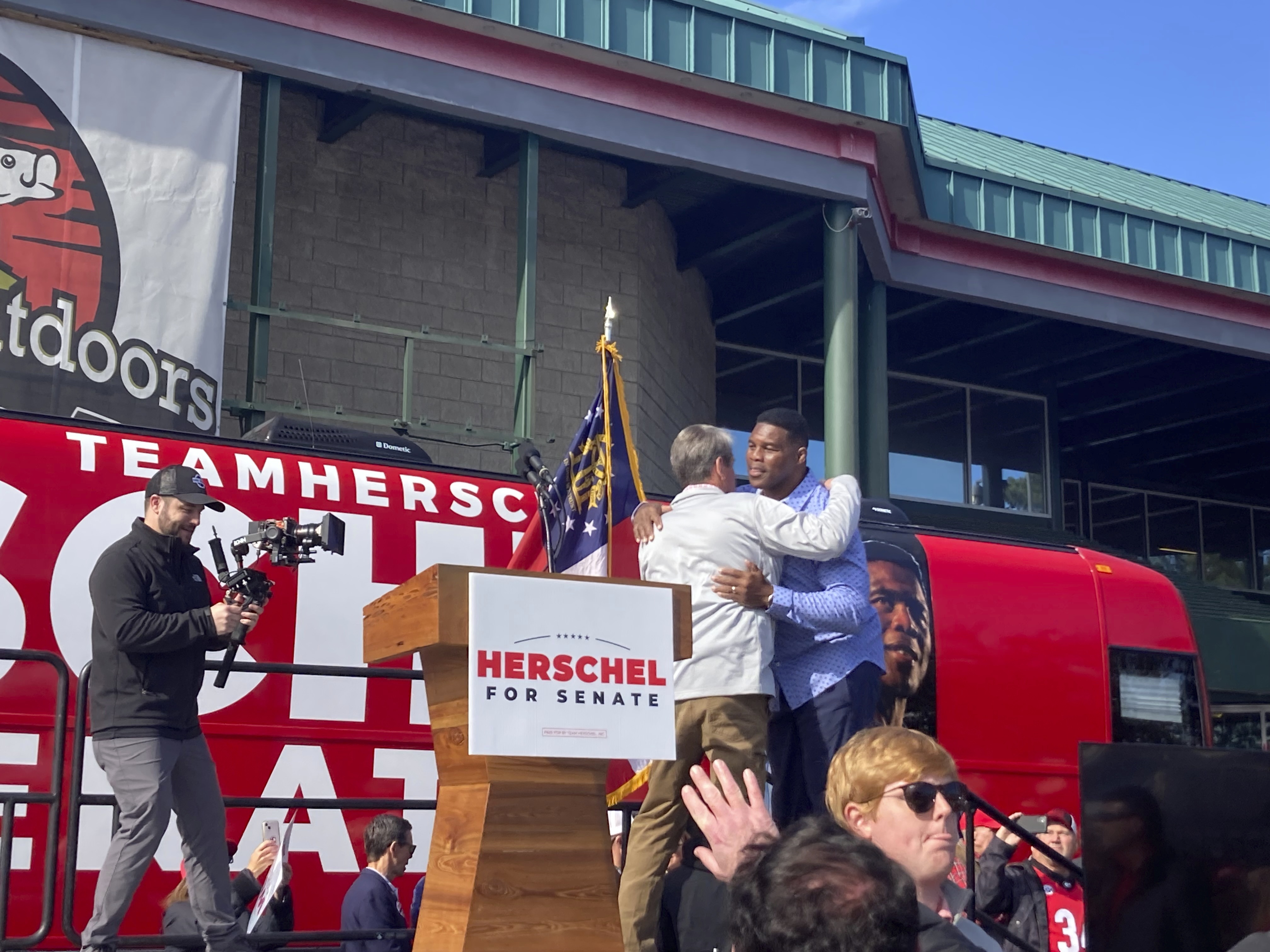 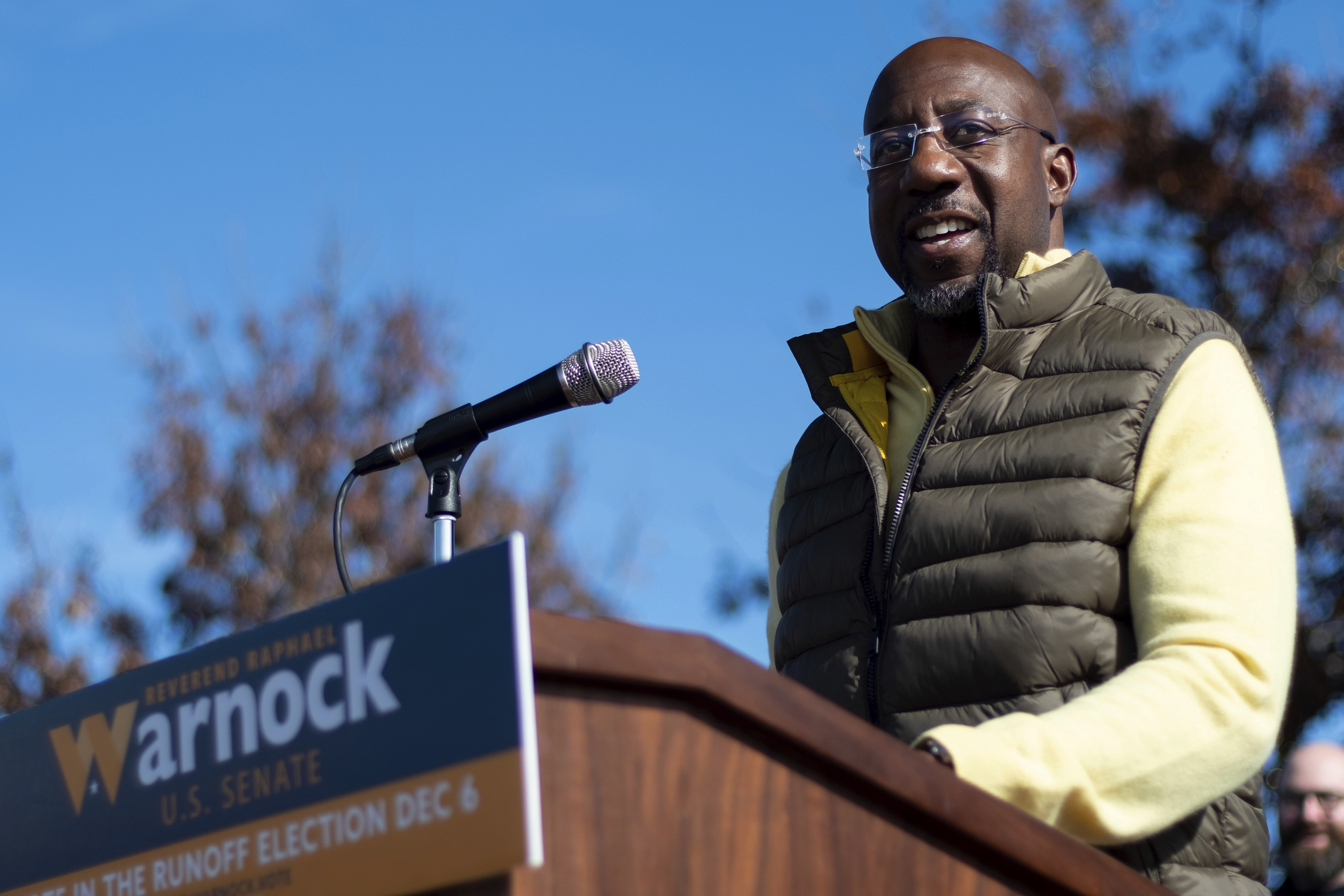 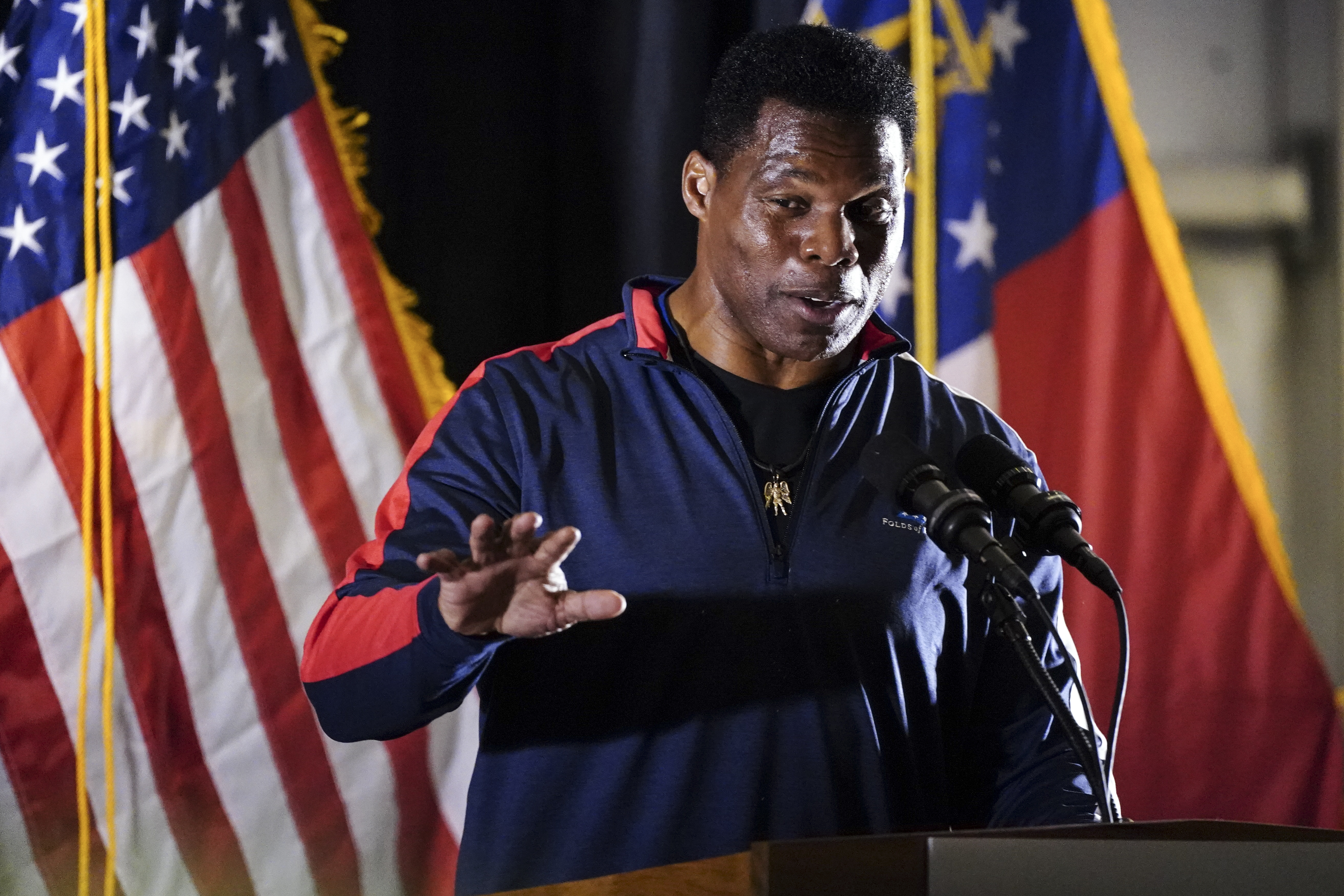 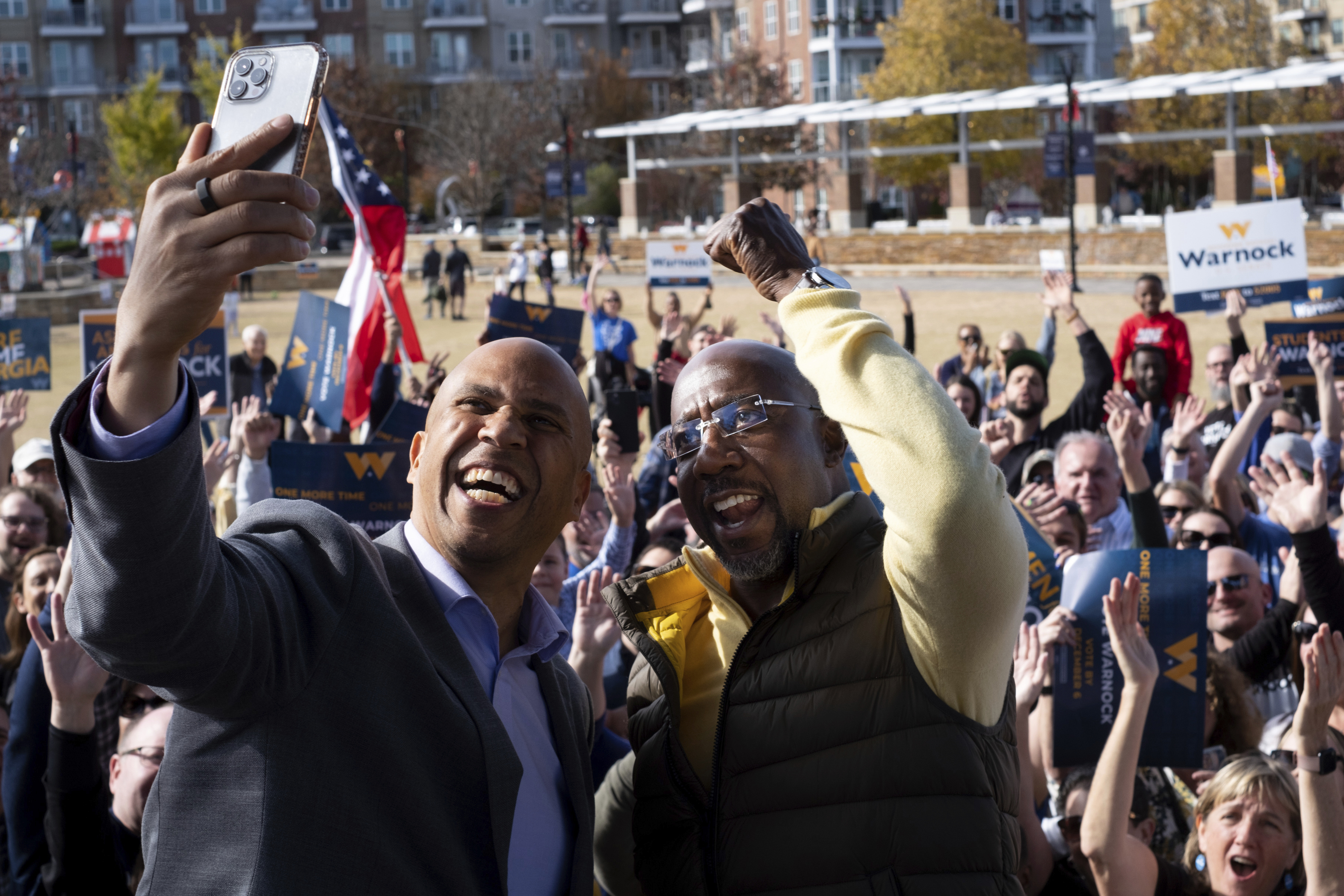