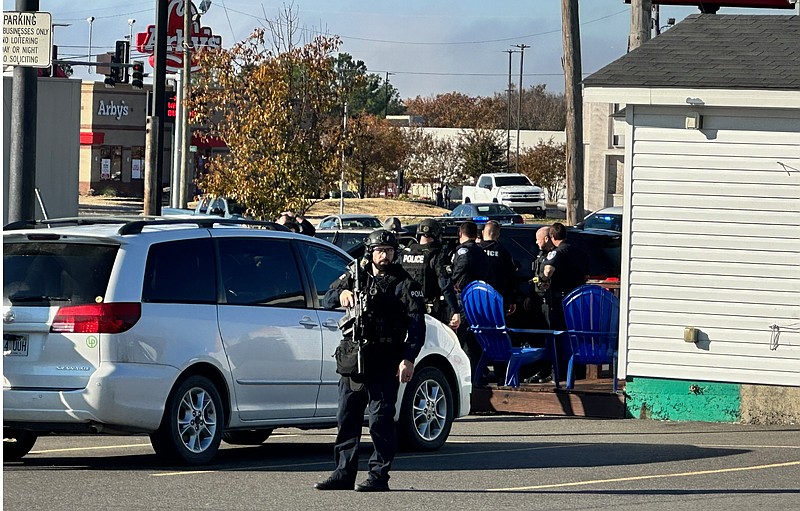 Hot Springs police are shown after a suspect in a threatening incident Monday morning was taken into custody after a standoff that followed a traffic stop in the 1300 block of Albert Pike Road. - Photo by Mark Gregory of The Sentinel-Record

Hot Springs police arrested a male suspect from an earlier alleged threatening incident involving a firearm after a stand-off that lasted just over an hour Monday morning following a traffic stop in the 1300 block of Albert Pike Road.

The suspect, whose name has not yet been released, had reportedly made threats to employees of a business on Hobson Avenue and allegedly displayed a firearm before leaving, HSPD Officer 1st Class Omar Cervantes, the department's public information officer, said Monday, but he noted he did not have the official report yet.

Police made a traffic stop on the suspect's vehicle in the parking lot at the intersection of Albert Pike and Airport roads around 8:30 a.m., but he reportedly initially refused to cooperate with officers prompting a standoff that ultimately involved other agencies, including Garland County sheriff's deputies and Arkansas State Police who helped seal off the area.

Shortly after 9:30 a.m., Cervantes said the suspect tossed a weapon out and was taken into custody without further incident and transported to the Garland County Detention Center. Charges in the incident are not known at this time.