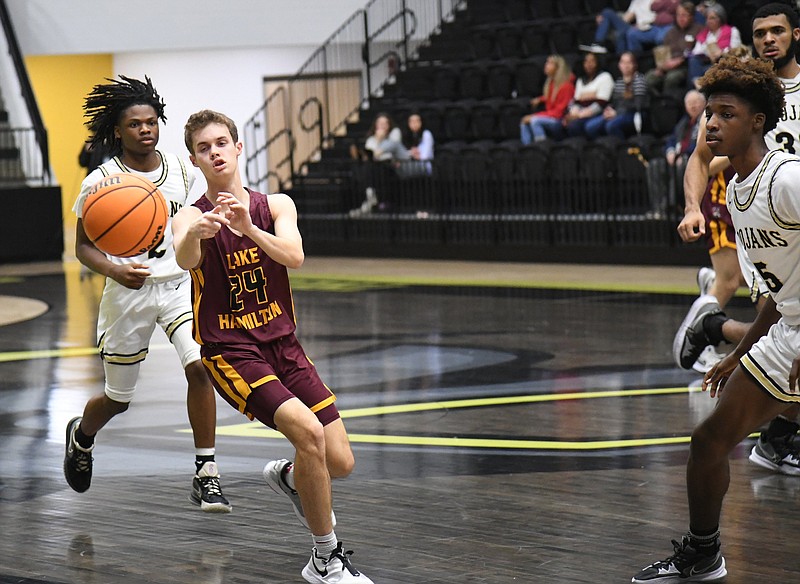 Lake Hamilton's Zac Pennington (24) makes a pass against Hot Springs last season. The Wolves continue their start to the season with a game against Watson Chapel Tuesday and in a three-day tournament beginning Thursday in Branson, Mo. - File photo by The Sentinel-Record

PEARCY -- After a run to the state semifinals last year, the Lake Hamilton boys basketball team is primed for another deep run in the postseason.

The Wolves started the season with a big time win over Little Rock Parkview on the road and a win at home over Forrest City.

"We went last year and we always had really struggled in the first game after the long trip in the past," Lake Hamilton head coach Scotty Pennington said. "Last year it was maybe one of the better games we played all year against Branson that night. That first night just sets the tone."

The tournament is in a round-robin format. Even if a team loses the first game, that team can still go on to win the entire tournament.

"It teaches the kids to go one game at a time," Pennington said. "And learn how to get off the bus after a long three or four hour trip and be able to bring your A-game, which is not always easy to do."

Branson graduated eight seniors from a team that lost 90-63 to the Wolves last season.

"Branson I think is going to be really young," Pennington said. "They haven't played in a game yet. So we will go into that one pretty much blind on what to expect from them other than knowing that they graduated a lot. So they should be really young."

"They'll have a 6-foot-6 center back from last year's team," Pennington said. "Other than that, they have graduated a bunch. We have a few films on them."

"Which is a 6A school in Missouri," Pennington said. "According to the people that I've contacted to ask about them, they have a Division I guard. So they should be a very, very good game for us. They're ranked in the top 10 in 6A in Missouri. That's all we really know about them. They haven't played yet."

Pennington said the tournament can prepare his team for future state tournament games where the Wolves might have to perform after a long bus ride and continue to perform for multiple days in a row away from home.

"It just gives us the experience of we're used to making that long trip," Pennington said, "staying in a hotel, maintaining focus on the task at hand, which is the basketball games and our studies and not all of the other things you could get wrapped up in."

Watson Chapel is 3-1 on the season with a Division I talent in Khamani Cooper on the roster.

"I think he's the best player that we have faced yet," Pennington said. "He's really talented. He's big. He's athletic and physical. They have another point guard in Keshun Brown that's a really, really good player. A college prospect as well."

Pennington said the Wolves would learn a lot about themselves Tuesday night.

"Anytime you play somebody that is athletic as they are and has two college prospects, they're going to present a challenge like a Pine Bluff would in conference or a Hot Springs would in conference," Pennington said. "That's why we schedule those games. That's why we like playing them because they're a lot like the teams we're going to have to beat later on to win a conference championship or state championship."