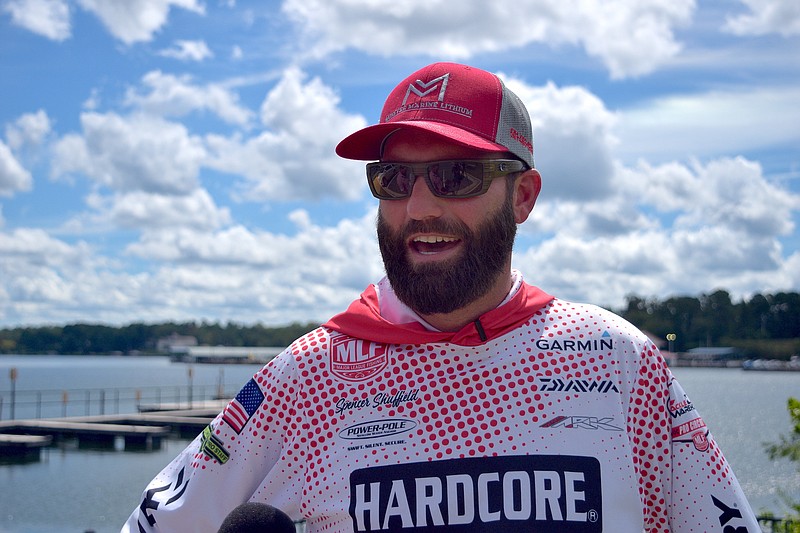 Veterans Stephen Browning and Mark Davis are on the tour again, and they will be joined by younger Garland County talent Dylan Hays and Spencer Shuffield.

Hays scored a big $10,000 payout, finishing in the 23rd spot at Lewis Smith Lake in Cullman, Alabama, in March

"I am scaling down the number of tournaments I am fishing," Hays said. "Last year I fished both the Pro Circuit and the Bass Pro Tour. I am not going to fish all the invitationals. I am looking forward to being able to pre-practice for some of the BPT events."

Shuffield is new to the Bass Pro Tour.

Although it will be his first year on the tour, Shuffield is no stranger to hard competition. Shuffield won the Pro Circuit TITLE last season and is primed and ready to take on the best in the world.

"What a superstar," Pro Circuit Director Daniel Fennel said. "He is 110% focused and he is going to be a handful for the anglers that were already on the tour. He is more motivated and fired up right now than he has ever been in his entire career."

"It feels good," Shuffield said. "That was the main goal going into this year. Main goal accomplished. I am looking forward to getting the '23 season started. I am getting a new boat ready. We start back in January. "

New arrivals are invited to the Bass Pro Tour based on points accumulated in the previous season.

"This is the highest level in Major League Fishing," Hays said. "I have fished professionally going on seven years on the Fishing League Worldwide tour. When I started Bass Pro Tour did not exist. MLF did not exist. Three years ago, 80 guys came from Bassmaster Elite Series and handpicked a few from the FLW tour and they created the BPT.

"He is somebody who has come up through the ranks with us formally at FLW," Fennel said. "He has fished every level of our events. He qualified for the Bass Pro Tour last season, so he has been able to get his feet wet already. He held strong with them in the '22 season."

The vice president of Major League Fishing is Michael Mulone.

"We are excited to have Shuffield for sure," Mulone said. "He had quite a legacy and he definitely will be a force to be reckoned with on day one. He is just one of those where he has got the pedigree and the experience. It is impressive how well he has done. It is going to be a lot of fun to watch him perform."

The Bass Pro Tour features live scoring on all the boats with a PGA Tour approach to keeping score instead of weighing in at the end of each day.

"It made it compelling to watch because you know what the score is," Mulone said. "Anglers know what they need to catch to win or make the cut line. You do not have to wait until the end of the day now to know whether or not you made it. This makes it the most interesting and fun fishing show to watch."

With this scoring system, MLF is aiding in conservation efforts by releasing the fish after they are weighed quickly and returning the bass to their habitats.

"Not only is it catch, weigh and release, but if there is a flagrant drop on the deck there are penalties," Mulone said. "Through catch, release and the process of weighing the fish we have 100% return rate."

Hays is prepared for any competition.

"I never care what lake we go to," Hays said. "I do not care about the time of year or the format. It is all the same to me. You have to catch them every time you go, no matter what. I have had some of my best finishes on lakes I have never seen before."

"It is just the best of the best," Shuffield said. "It is not a 150-guy field. It is just 80. I like it. I am looking forward to it. They made a format change this year. Instead of every fish counts, it is just the biggest five each day. That's all I have ever fished. I am kind of bummed about that. That was one of the things about qualifying for the Bass Pro Tour was to fish all you could catch. I am more of a numbers guy."

"They have some extra events like cup events and a team series with the BPT anglers," Shuffield said. "It is a really cool thing. They just started last year. That has taken off pretty hot and heavy. I will fish my usual 20-25 tournaments. I will be able to fit them all in no problem."

MLF streams its events on its website as well as the Discovery Channel.

Shuffield is a dangerous competitor.

"We are not rooting for one guy over another, but there are a few things that for the past couple of years he has been up there at the top," Mulone said. "He has done very well on our invitational tournaments. By nature you must go through a diversity of fisheries and time after time Shuffield continues to be right there at the top."

Shuffield has had numerous top-10 and top-20 finishes in his career.

"Shuffield has always wanted to be the best," Fennel said. "He has got the fire lit up. He is ready to go."

Mulone emphasized that Shuffield is more than just a good angler.

"He has all of the skills to not only be a great professional angler but really represent our brand and our industry as well as his own personal brand extremely well," Mulone said. "We are fortunate to have guys like Shuffield and Hays."

Shuffield has his favorite ways to get big numbers on the water.

"The last three years it has been more finesse techniques for me," he said. "Dropshots and dead rig type stuff. Some guys say that's a wimpy way to fish but that is what's putting money in the bank and I do not care how I have to catch them. That is by far my favorite way."

Hays has had success in previous tournaments.

"Hays did well fishing on Lake St. Clair," Mulone said. "He has done well throughout his career and on the Pro Circuit when he started. When a guy does well fishing smallmouth and largemouth, it is a big deal. You look at where Hays' numbers are fishing in the Toyota Championship, Lake Martin and last year on the Pro Circuit, it is not easy. It is a grind. He is just getting started, and he has a lot of upside."

Hays caught over 95 pounds of smallmouth bass at St. Clair and has won the Toyota Series.

Hays went all in in 2017 and has put up great numbers. He is known for doing all the extra engagements for the tour.

"I use a Brazalo half ounce jig," Hays said. "As far as techniques, I use whatever it takes to get the job done. That's my strongest point. I am very versatile. It does not matter to me if I am in Florida flipping mats or in the middle of Lake Erie dropshotting 30 feet deep for smallmouth."

By the time stage seven rolls around in August, Hays and Shuffield will know which one of the young superstars of the bass world is on top.

"I am glad I qualified when I did," Shuffield said. "I am glad that's where I am going to be now. If you did not qualify this year even to get there will be extremely harder now. It was already super hard but I am looking forward to getting over there. I will be fishing against the best in the world."