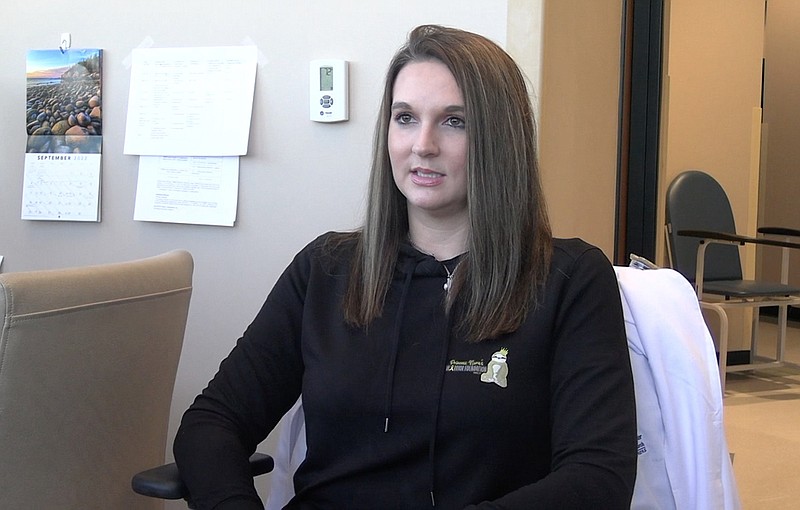 After losing her daughter, Nora, to a rare brain cancer, Tiffany McConathy started a nonprofit foundation to provide funds for pediatric cancer research.

McConathy studied at University of Central Arkansas where she received a master's degree in Nursing. She has worked in adult oncology, or the study of cancer, throughout her entire career in the medical field.

"I thought there was no way that I would ever like it or stay up there, and it would just be a steppingstone to my next career," she said. "But I ended up falling in love with a patient who had colon cancer, and I never looked back."

Neither she nor her husband has a distinct genetic history of cancer, she said. So, her daughter's diagnosis of an embryonal tumor with multilayered rosettes, or ETMR, came as a shock to her and her family.

They received the diagnosis in November 2021, and her daughter died four months later, in February, at 14 months old.

Barely even a month later, in March, Princess Nora's Warrior Foundation nonprofit was launched. To date the nonprofit has raised more than $100,000 and has funded a brief clinical trial for the form of cancer her daughter had, McConathy said.

"I feel like this is my way to keep her here with me," she said. "So I work at this every day and probably hide some of my grief through pushing forward, but hopefully making sure that other kids someday don't have to have the same fate she had."

The 5K the foundation hosted on Sept. 24 raised nearly $34,000. Out of the money raised, 40% goes toward funding research and 30% goes to patients' families who may need assistance.

"Working in adult oncology with adult cancer patients, you just assume that children are treated the same, research is done the same. They always say, 'Childhood cancer is so rare, it doesn't really happen that often.' But in reality, eight to 12 kids at (Arkansas) Children's Hospital are diagnosed every single month here in our state alone."

The goal of Princess Nora's Warrior Foundation to fund pediatric cancer research stems from the lack of treatment options McConathy's daughter had.

"My daughter received drugs that were 40 to 70 years old, and the side effects are harsh," she said. "Most children that survive their cancer diagnosis, and after receiving these treatments, have an average of 25 chronic health conditions by the age of 50.

"In adult oncology, we get around four new drugs every single month to further research. The clinical trials are on average six and half years behind for pediatric cancer, and it's not for a lack of parent willingness."

McConathy and her husband actually wanted a research autopsy performed on their daughter to collect tissue and aid research on the disease, but since she tested positive for COVID-19 more than a week prior to her death, the hospital refused, the nonprofit's website said.

"Whenever I realized the lack of funding, the lack of research, the lack of help for parents that are going through this who aren't like me, they don't know this world, I had to do something, and I knew that they needed help," McConathy said. "I knew that I had to help because I have a very unique perspective on cancer and now on pediatric cancer."

Princess Nora's Warrior Foundation is accepting donations through its website at noraswarriors.com. The sloth logo represents Nora since her favorite animal was a sloth, and the name of the nonprofit comes from her nickname as "Princess," McConathy said.