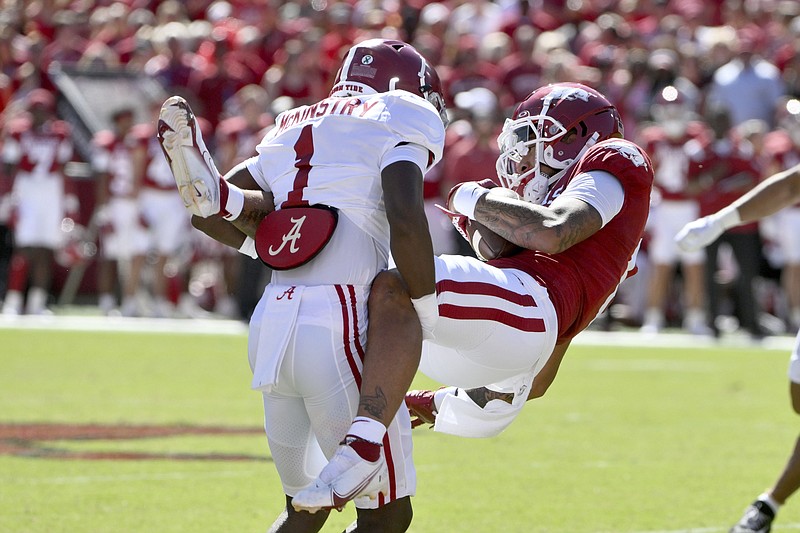 Other than that, Razorback fans, how did your sports weekend go?

Some of you cheer for baseball's St. Louis Cardinals, no doubt raising the volume when Albert Pujols swatted career home run No. 702 Sunday. That leaves him fourth all time, 12 behind George Herman Ruth, whose last of 714 came in 1935, a record that stood until Henry Louis Aaron connected on the first April Monday of 1974.

Barry Bonds set the current single-season and overall standards of 73 (2001) and 762, respectively, in a career so overshadowed by steroid use that Hall of Fame induction is thus far denied. The same taint exists regarding Roger Clemens while gambling has blocked the Cooperstown, New York, entry of Pete Rose, the career hits leader.

Baseball, it should be said, has greater problems, dating all the way back to Shoeless Joe Jackson's time, now including that of competitive balance. The national pastime lacks strong leadership that would address the HOF matter once and for all.

Five paragraphs into this column, we should get around to reviewing the major sports story in Arkansas last weekend. It involved Razorback football, of course, and evoked a headline that could have been written on Monday of game week: "Sweet 16th for Alabama against Hogs, (get score)."

It was three games in one, Alabama winning two and reclaiming No. 1 in the polls after Georgia's life-and-death struggle with Missouri at night. Arkansas, up to No. 9 (coaches' poll) before facing Texas A&M on a neutral site, stayed 25th in that poll Sunday while "also receiving votes" in The Associated Press (media) sampling.

Starting 3-0 with promise after a nine-win season under Sam Pittman, the Razorbacks are seen to keep skidding Saturday with Mississippi State picked by eight points at last check in an 11 a.m. kickoff at Starkville.

Arkansas, once down 28-0 to Alabama, positioned itself to cover a 17.5-point underdog role Saturday if not slay the Crimson Tide, 20 years after Nick Saban's last of two losses to the Razorbacks.

All things seemed possible when the Hogs pulled within 28-23 in a 16-0 third quarter. The Razorbacks, after all, had almost 76,000 fans in their corner and were freed from the menace of reigning Heisman Trophy winner Bryce Young, the Crimson Tide quarterback hurting a shoulder in the second quarter when chased to the sideline by ex-teammate Drew Sanders, now a rampaging Arkansas linebacker.

Alabama, with the class of a champion, came back like a fighter behind on points and needing a knockout. Torching Arkansas through the air early, Alabama broke ground gains of 72, 76 and 77 yards (the first two for touchdowns) in the fourth quarter. Saban can be stingy when awarding style points, and Alabama made some critical errors, but the coach noted that his team "made plays when it had to."

Arkansas has achieved much under Pittman after a turbulent last decade. But until it fares better against the top tier of the Southeastern Conference -- Alabama, Texas A&M (10 losses in 11 meetings) and Georgia (losses home and away, the latter by 37-0, under Pittman) -- few outside the state are likely to notice.

Arkansas fans yearned for ESPNGame Day to visit Fayetteville (first time since 2006) for the Alabama game. The network instead covered the Atlantic Coast Conference top-10 battle in the piney woods of South Carolina between North Carolina State and Clemson. Arkansas' loss to A&M and the prospect of another Alabama blowout affected travel plans.

Meanwhile, like the national debt, Arkansas' losing streak against Alabama mounts and Razorback fans voice that one great recruiting class will change things. More likely, it will take Saban's retirement at Alabama, although he will be 71 on Halloween, Coach Aflac (of TV advertising) seems to be going strong, still feeding that monster he raised to record heights.

Arkansas isn't the only SEC school getting such in-the-face domination from Alabama but the others are also taking it flat on their back and looking up.