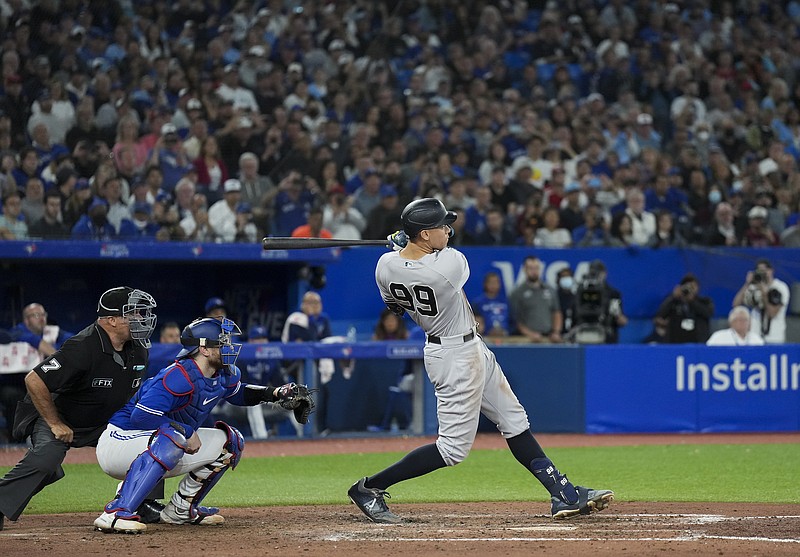 New York Yankees'Aaron Judge (99) follows through on his 61st home run of the season, next to Toronto Blue Jays catcher Danny Jansen during the seventh inning of a baseball game Wednesday, Sept. 28, 2022, in Toronto. (Nathan Denette/The Canadian Press via AP)

Aaron Judge, like two baseball stars he passed in the record book within days of each other, showed expert timing.

No. 99 of the New York Yankees belted home run No. 62, an American League single-season high, on the penultimate day of the regular season. The only false note might have been that it was not at Yankee Stadium, where Roger Maris hit No. 61 on the last day of the first 162-day American League calendar and Babe Ruth swatted No. 60 in 1927, even if ESPN wasn't there to ask either man his reaction. Judge connected in Arlington, Texas, where few October games of significance are played unless by the Dallas Cowboys.

Judge had gone cold after hitting No. 61, the AL and team record since 1961, when Maris outlasted Mickey Mantle (54) in the greatest home-run chase until Mark McGwire and Sammy Sosa came along. ESPN's "PTI" co-hosts were somewhat divided Tuesday regarding whether a damper would go on Judge's mark if he did not hit No. 62.

Tony Kornheiser said, yes, it might not be enough to cost him the AL Most Valuable Player Award but especially after getting so much attention this season. Before a late slump knocked down his batting average, Judge flirted with the AL Triple Crown, which Mantle achieved in 1956, perhaps his greatest season, and like Ruth in '27 and Maris in '61, the Yankees won the World Series. None of those guys batted in the leadoff spot, which Judge did at times.

Michael Wilbon said Judge might get a better reaction. Only to older fans perhaps do the numbers 60 and 61 sound captivating. Barry Bonds, McGwire and Sosa broke through that glass ceiling, even if juiced on steroids.

Roger Maris Jr., keeping track of the record his father set 61 summers back, saluted Judge's achievement while noting that the new holder apparently did it clean.

Pray that he did just that. That Judge broke the rules and used performance-enhancing drugs would be a killer story for baseball, capping a splendid season that because of labor problems in the spring once looked iffy. Remember your reaction when hearing the connection between Pete Rose and gambling, then double it tenfold. That's a story that might mean a Pulitzer for the author but cripple the sport. Say it isn't so.

That Judge plays for the Yankees, the Tiffany franchise of baseball, makes it all the more special. Especially since it comes in a contract year for Judge, who in early season beat the ballclub in arbitration and turned down a salary hike. The Yankees, with fewer wins than the crosstown Mets, can hardly afford to fall short in the bargaining for Judge.

The Bronx Bombers, whose Monument Park is mistaken by some as a resting place for dead Yankee heroes (start your list with Ruth, Lou Gehrig, Joe DiMaggio and Mantle), became front-page news in 1920 when the rival Boston Red Sox, World Series champion two years prior, saw fit to unload their star slugger and left-handed pitcher.

The Yankees picked up him, fellow named Ruth. Look what that led to.