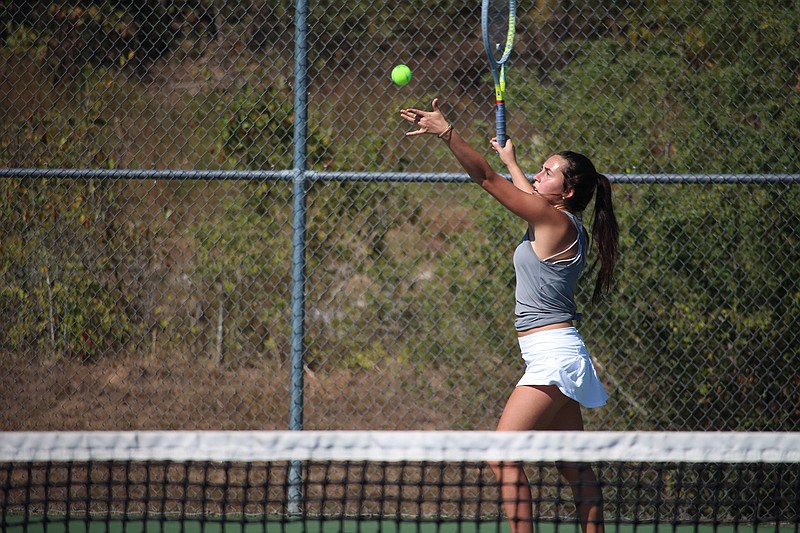 It was all Lakeside at the Class 5A-South conference tennis tournament Wednesday.

Standout Ram Ben Hollis advanced to the boys singles finals after a 6-1, 6-0 win over Lake Hamilton's Peter Bobnar in the semifinals. The senior then cruised to a 6-0, 6-0 win over teammate Walker Wood to secure an individual conference title.

Wood only reached 30 in one game during the first set and forced two deuces in the second, but Hollis looked comfortable for the entirety of the contest. The Rams battled in some long rallies, but Hollis' serves and ability to place shots when it mattered gave him the edge.

"I think overall throughout the entire week I've been playing really good actually," Hollis said. "You know I'm definitely not as in my mind as last year. I don't feel the pressure anymore. I'm just having fun, hitting the ball."

Hollis finished as state runner-up the last two seasons and will have a chance to secure that coveted state championship next week on his home court. Hollis' physical ability has always been there, but this year he really upped his mental game.

"Just relaxing when playing," he said. "Last year I got so nervous and this year I'm just playing tennis."

"Ben is always on top of things," she said. "He always performs very well. You don't ever have to worry about him. I expect big things out of him this year for sure."

Lakeside swept the boys and girls conference team titles, and it would have been all Lakeside players in the final matches if it wasn't for Lake Hamilton's Sheyla Praetzel taking down Brenna Townley in the girls singles semifinals.

"This group is a special group because we have 12 seniors in this group," Green said. "The fact that they've all qualified for state gives us a chance to compete and is pretty big for us."

Both the Lakeside girls and boys finished as state runner-ups last season as a team.

"I'm hoping," Green said, "we can get over the runner-up hump and come out with a championship for the boys and girls."

"It means a lot since I'm a senior," Malone said. "It's like super exciting. I'm really glad to finish it out this way -- my last conference. It was a pretty good score too so I'm really happy about that."

Malone battled back from a 40-15 deficit early in the second set with Praetzel serving to force a deuce and eventually win the game.

"Just kind of like getting her a little bit closer to the net then once they get up to volley I kind of like in my peripheral vision I can kind of look past them and see where is a good shot," Malone said. "I really feel like that worked for me today."

Malone beat Sheridan's Olivia Jablonski 6-3, 6-2 to advance to the finals.

"I feel like I struggled with my serves a little bit so I'm going to practice that before state next week," Malone said. "But other than that I really felt like I had some good shots. I'm pretty proud of my performance today."

Malone said she is excited to see how far she can get in the state tournament this year, and she likes the team bonding aspect of state competition.

"She's come along very nicely," Green said. "She's pretty serious about what she's doing out there. She's playing really hard, and she's giving it everything she's got. So she also has high expectations for herself this season. I'm pretty sure she'll get there as well."

With state starting Monday, Hollis said there is not much a player can sharpen up or improve on in the few days before the next tournament begins. Overall, he is confident in his game and hopes to win a state championship in his senior year.

"I think it's kind of like bittersweet," Hollis said. "It's coming to an end, but also I'm looking forward to college and a new beginning."

Jonesboro won the previous five state tennis championships on both the boys and girls sides, but the Hurricane moved out of Class 5A and into Class 6A.

Both the Rams and Lady Rams have a chance to win state titles this year.

Despite Jonesboro moving out, Lakeside rival Pulaski Academy moved back into the classification this season, and Green marked the Bruins as the biggest competition in the state tournament.

"They're always our rival," Green said. "We'll have to beat them to win it all. But I think we definitely have a chance."

Any player or doubles team that made the semifinals advanced to state. Lakeside and Lake Hamilton both have players looking to make a run.

"I'm looking forward to winning first of all," Hollis said. "Then you know, just playing tennis, having fun. I have a lot of friends that come down here. Say hi to them. I think it's going to be a good time."