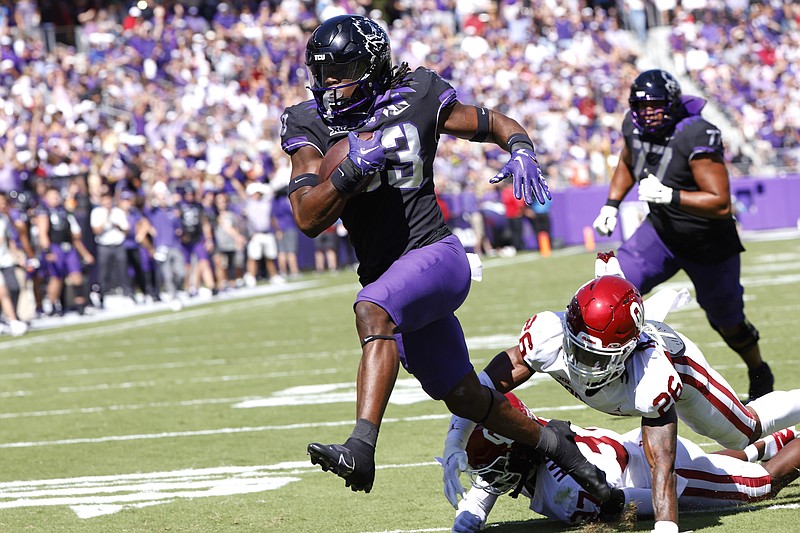 TCU running back Kendre Miller (33) escapes the grasp of Oklahoma defensive back Kani Walker (26) to score a touchdown Saturday in Fort Worth, Texas. - Photo by Ron Jenkins of The Associated Press

What does it tell you about college football this year when of two Big 12 games in the 11 a.m. time slot Saturday, Texas vs. Oklahoma shapes up as less intriguing.

Two losses by each squad have removed the luster from the first matchup of Steve Sarkisian (Texas second-year coach) and Brent Venables (Oklahoma first-year coach). According to tradition, they'll play the Red River Shootout at the Cotton Bowl during the State Fair of Texas, and no doubt some inebriated fans on both sides will spend Friday night in city jail. With half the expected capacity crowd dressed in red (Oklahoma colors) and half in orange (Texas), they'll be dropping first names like crazy with those of Bud, Darrell, Barry and Big Game Bob in the air (those of Charlie Strong and Howard Schnellenberger -- not so much).

Farther north, taking Interstate 35 across the Red River, comes the unlikely summit meeting between TCU and Kansas, both unbeaten and ranked in the top 20 nationally. It will be played in the Kansas arena that Gale Sayers and John Riggins once starred for the Jayhawks, not the house that Wilt Chamberlain helped make famous.

Don't be surprised if you drew a blank on the coaches' names. TCU, having become a notable name under Gary Patterson, rattled some cages in the Dallas-Fort Worth Metroplex by landing Sonny Dykes from SMU. Kansas, scrambling for a coach since Mark Mangino left -- dashed with big-name hires of Charlie Weis and Les Miles, not to mention set back by a former Arkansas athletic director -- hit the jackpot with Lance Leipold.

If an opposing basketball coach (Bob Huggins at West Virginia) got bonuses for beating Kansas anywhere, what did Leipold deserve for beating Texas in Austin?

The Jayhawks' football surge includes road wins over West Virginia and Houston and a 14-11 home game with Iowa State, making KU 2-0 in the conference and 5-0 overall.

Who knows if it will last beyond Saturday against a 4-0 TCU team that hung 55 points on Oklahoma in three quarters, like one of Barry Switzer's Sooner teams did often? Another win makes Kansas bowl eligible within its best start since 2009. What's more, ESPNGame Day comes to Lawrence this weekend but without Jay Bilas walking 94 feet in Allen Fieldhouse with Bill Self or one of his players.

For those who thought I would never say it in print: Rock Chalk, Jayhawks: And to some Fort Worth friends: Go, Frogs.

"It's nice to have a packed stadium, and a lot of noise whenever you make a play or one of your brothers makes a play, and you see them light up with joy when you hear those screams and yells for you," Kansas receiver Luke Grimm told ESPN. "It's nice to show we're building a great football team here."