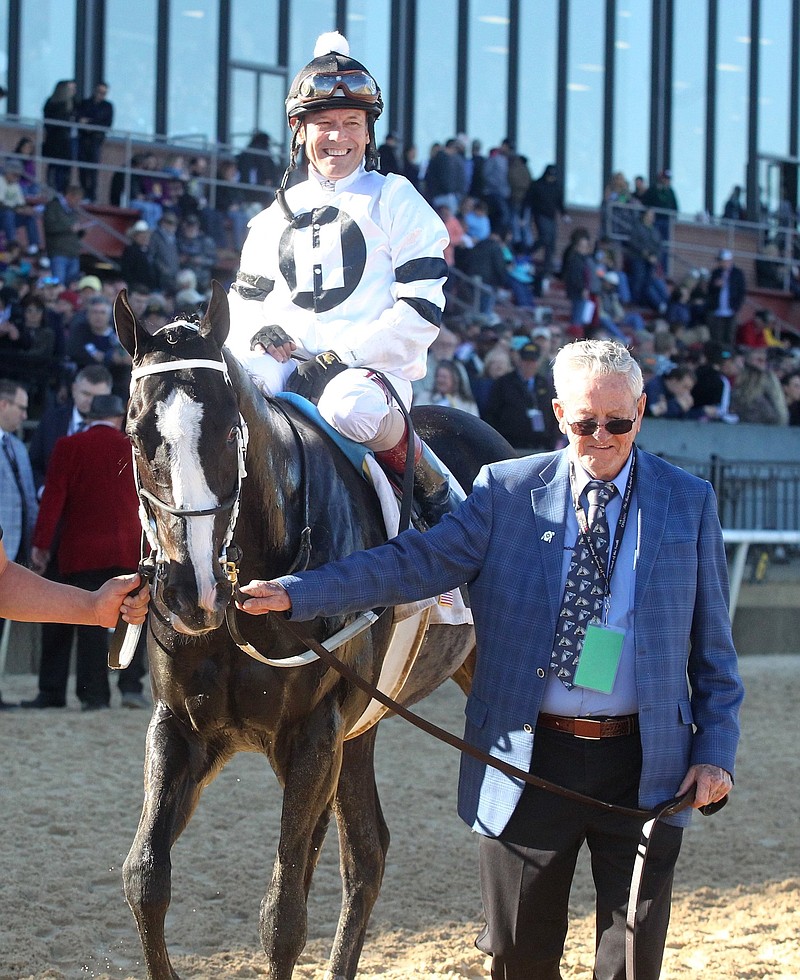 Owner Willis Horton, right, leads jockey Jon Court and Long Range Toddy (2) into the winner's circle after winning the tirst division of the Rebel Stakes at Oaklawn Park on March 16, 2019. - File photo by The Sentinel-Record

With the passing of Willis Horton, Oaklawn loses a friend and the national racing scene an active campaigner in recent years.

A thoroughbred owner-breeder from Marshall (Searcy County), Horton died Friday in Fayetteville of pneumonia at age 82.

COVID-19 affected Horton and his family after returning from the Keeneland September Yearling Sale in Kentucky, and son Kevin was quoted on http://Bloodhorse.com that his father "just couldn't kick it."

He earned championships with 2013 male 3-year-old colt Will Take Charge and 2014 2-year-old filly Take Charge Brandi. Both were trained by Hall of Famer Wayne Lukas, who said of Horton, "He had a great eye for a horse himself and he understood the game. He was game and he wasn't afraid to step up and spend money on a good horse."

Both of his champions won Oaklawn stakes as 4-year-olds, Will Take Charge in the 2014 Oaklawn Handicap and Take Charge Brandi in the 2015 Martha Washington.

Also in 2021, Will's Secret, a 3-year-old filly owned by Horton and trained by Stewart, won the Martha Washington and Grade 3 Honeybee at Oaklawn.

A retired home builder, Horton left Texas, where his nephew Donald Horton's building business was located, around 2000 and returned to north Arkansas.

Survivors include wife Glenda, Kevin and his wife Laurie, and their two children. Visitation and a service were scheduled Tuesday in Marshall. Kevin Horton said a donation to the Permanently Disabled Jockeys Fund (a cause in which jockey Court is active) will be accepted in lieu of flowers.