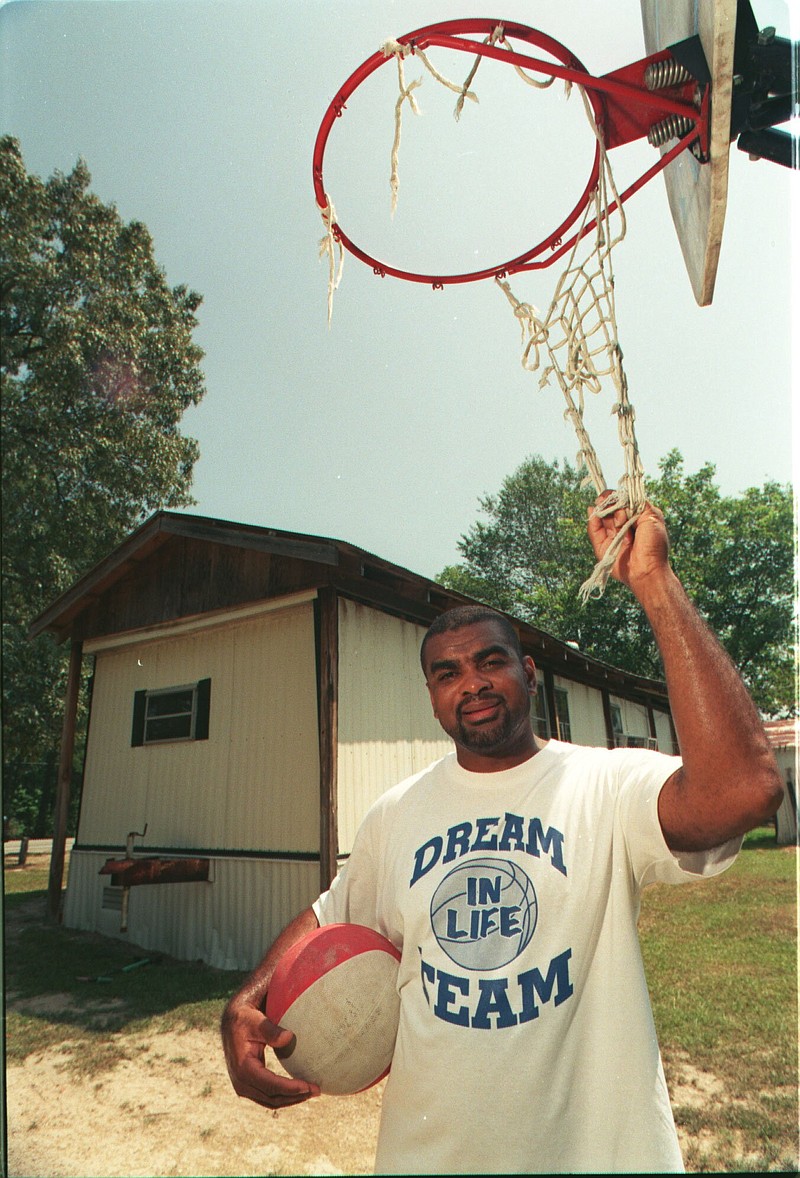 Former Arkansas Razorback basketball player Ricky Norton stands next to his his son's basketball goal on July 28, 1997, behind his Antoine home, southwest of Arkadelphia. - Photo by Steve Keesee of Arkansas Democrat-Gazette

Brittenum, 78, had been in ill health for several years and living in south Texas, it was reported. Quarterback for two Arkansas teams that beat Texas in a three-year run of 29-3, he was a Brinkley native.

Norton, 61, that rare shooter of unlimited range recruited by Eddie Sutton when the coach preached ball control in an era without a shot clock, died at 61 at CHI St. Vincent's in Hot Springs. The Okolona native "had been dealing with some ailments the last few years," said Arkansas-Little Rock coach Darrell Walker, a former Razorback teammate. "He was on (kidney) dialysis, but he was doing fine until a couple of days ago. Then he took a turn for the worse."

Alerted by Norton's wife, Ann, of her husband's declining health, Walker visited Norton at the hospital near the end.

Brittenum, known as that "quarterbackin' man" when arguably the most popular Razorback athlete in any sport, steered the Razorbacks to a second-straight Southwest Conference title in 1965. Member of the stellar 1963 Arkansas freshman class that included Harry Jones and Loyd Phillips (both deceased), Brittenum passed to Bobby Crockett for key gains and sneaked over for the winning touchdown late in a 27-24 victory over No. 1 Texas at Fayetteville in 1965.

That victory propelled Arkansas atop The Associated Press poll for the only time in football a week later. Coached by Frank Broyles, the Razorbacks stretched their winning streak to 22 games before losing 14-7 to LSU in the Cotton Bowl Jan. 1, 1966. With a victory on a day filled with upsets, Arkansas stood to be unanimous national champion in the final polls.

Following seasons of 11-0 and 10-1, the 1966 Hogs went 8-2 in Brittenum's senior year. Stymied 7-0 in October by Baylor, their first Southwest Conference loss in three years, the Razorbacks declined a bowl bid after a 21-16 road loss in November to Texas Tech. That game is remembered for Brittenum being denied a touchdown on consecutive goal-line sneaks in the second quarter with the Hogs leading 10-7.

In another famous 1966 game, the right-handed Brittenum threw a left-handed pass when trapped against the sideline in a 34-0 road win over Texas A&M.

Later named to the UA's All-Decade team of the 1960s and inducted with the 2021 class (the ceremony postponed a year because of the COVID-19 pandemic) to the UA Sports Hall of Honor, Brittenum was undrafted in 1967 but made the Miami Dolphins' second-year team and played one season for the San Diego Chargers (with ex-Razorback star Lance Alworth) in 1968.

Unable, he said, to land a quarterback with Brittenum's ability to run and pass, Broyles said he changed offenses in 1968 to an attack with two wide receivers, one directed as a sophomore by Bill Montgomery and later by Joe Ferguson. Brittenum redshirted as a UA sophomore in 1964, that team quarterbacked by senior Fred Marshall.

A 1980 McDonald's All-American at Okolona (Clark County), Norton chose Arkansas over Kentucky out of high school. Walker, from Chicago, and Norton both arrived on the Arkansas campus in summer 1980, Walker after prepping at Westark Community College and later spending 10 years in the NBA.