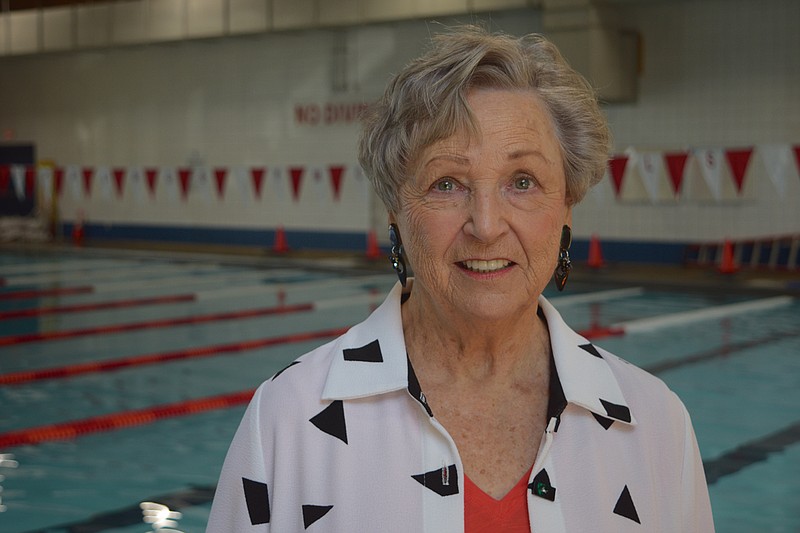 Burke started swimming in 1976 after her daughter's swim coach suggested she practice for the upcoming swim meet being held at their local swim club. – Photo by Donald Cross of The Sentinel-Record

While driving her daughter to swim practice one day in 1976, Dotty Burke could have never imagined the way her life was about to change.

Burke and her family had just moved to St. Louis. Her two children had previously been involved in swimming when they lived in Illinois, she said. When they moved, she started taking her daughter to the local swim club, Sugar Creek Swim Club, in St. Louis, where the next national swim competition was to be held for master swimmers, which are competitive swimmers ages 25 and older.

She would drive her 12-year-old daughter to summer swim practice every morning and watch while her daughter swam. When the swim coach suggested Burke get in the pool and practice for the upcoming competition, she hesitated at first.

"I had never competed in anything, including swimming," she said. "So I thought, 'I'm driving my daughter here and I'm sitting, just doing nothing for an hour, sometimes an hour and a half. Why don't I get in the pool and swim?' So I did."

Not only had she never competed in anything before, but Burke had never really been involved in any kind of fitness activity before swimming, she said.

After encouragement from the swim coach, Burke decided she would compete in the U.S. Masters Swimming Long Course National Meet. She ended up placing in the top 10 fastest times in the U.S. in breast stroke, she said.

"I did not know I was a good swimmer until I swam at that meet and realized I was OK," she said. "And from there I continued on with my swimming.

Burke's swimming career got started the day of her daughter's swim practice in 1976. However, at 12 years old, her daughter wasn't very thrilled to practice with her mother.

"My daughter was so embarrassed, and people would say, 'Is that your mother?' And she would say 'No it's not,'" Burke said. "But now, we've been able to go to triathlons together, we have the same group of friends and we've gone to swim meets together and competed. It's a wonderful situation now."

For several years, she took a break from swimming competitively to focus on her career.

Her former husband's company, which she renamed D.A. Burke & Associates LLC after she took over, is a medical sales and distribution company. Her territory included Kansas, Missouri, southern Illinois and Arkansas, and she could move anywhere as long as it was located within her territory.

With very active lifestyles it wasn't a difficult decision for Burke and her current husband to move to the Village, where they are able to play tennis, kayak, fish and of course, swim. However, Burke drives about 35 minutes three times a week to the Hot Springs Family YMCA to swim.

"I can be guaranteed that I can get a swim lane and the water will be the perfect temperature for me to swim," she said.

She's still very involved in the Village, though, acting as the secretary for the Public Relations Committee for the Hot Springs Village Community Foundation for three years.

During her break from swimming competitions, she got involved in triathlons, especially the Tri-The-Village triathlon as the water/safety coordinator as well as competing in the events as a swimmer on the relay team.

"I got kind of tired of just swimming, and then a group of us started running," she said. "And then we said, 'We can run and swim, why don't we bike?' And so we did."

Although she was unable to run anymore after a hip replacement, she still competed in the triathlons in the Village as a swimmer on the relay team.

"I thought that was pretty neat because I swam against college-aged kids and did really well," she said.

In 2018, Burke was diagnosed with breast cancer. She was treated in 2019 and had an operation, but later that year, she received another diagnosis of ovarian cancer.

"It was a surprise to be diagnosed with cancer, especially the ovarian cancer," she said. "And then when I had the operation, the doctor told me that I was the oldest woman on the floor and I was the first one to be released."

After treatment, Burke was officially cancer free by the end of 2020, and was able to continue swimming competitively.

"And the reason I was able to recover so quickly is because of my swimming background and the fitness that I've been able to gain from the years of swimming," she added.

"I could never be in the shape physically that I am if it wasn't for swimming and working out. I feel that it keeps me younger."

Although she can't swim as much as she used to, she still continues to swim about a mile every time she visits the YMCA, she said.

"I used to travel to international and national events, but I don't do that anymore," she said. "It's costly, time-consuming. I swim at the Hall of Fame Swim Meet at the University of Arkansas in Little Rock. And I'll swim seven or eight events at that meet."

Her times from that swim meet are recorded on a national level, and then the top 10 times in each age category are then posted at the end of the swim season, which is how she is able to gauge her position.

"I'm still competing with women who I started swimming with in 1976," she said as she laughed. "They won't go away!"

Last year, she competed in seven events, with four first places and three second places on the national level.

Burke not only competes against longtime competitors, but sometimes, also against swimmers nowhere near her own age.

"And I've enjoyed interacting with the young swimmers. Sometimes at a meet, we swim with very young kids, and the last mixed meet I swam at, I can remember getting up on the blocks. I think it was a mixed group of boys and girls aged 9 and 10 that were on the other blocks with me, and so I was swimming against them. And at the end of the race, the parents were in the stands, and I could hear people clapping and yelling. I thought it was for the kids. I thought it was a real close race. And at the end of the race, they were all cheering for me.

"I'm able to encourage them, to say, 'Hey, keep doing it and you can do it for life. It's a lifetime sport.'"

Keeping at it for life is something Burke said she plans to do. Although she doesn't have any swim meets coming up soon, she said she's hoping to someday compete at the national level.

"The guys up in Little Rock have always asked me to go to nationals because a group of them always go," she said. "So I said, 'If I'm still around when I'm competing in the 85-year age group, I'll go to nationals. So that's my goal." 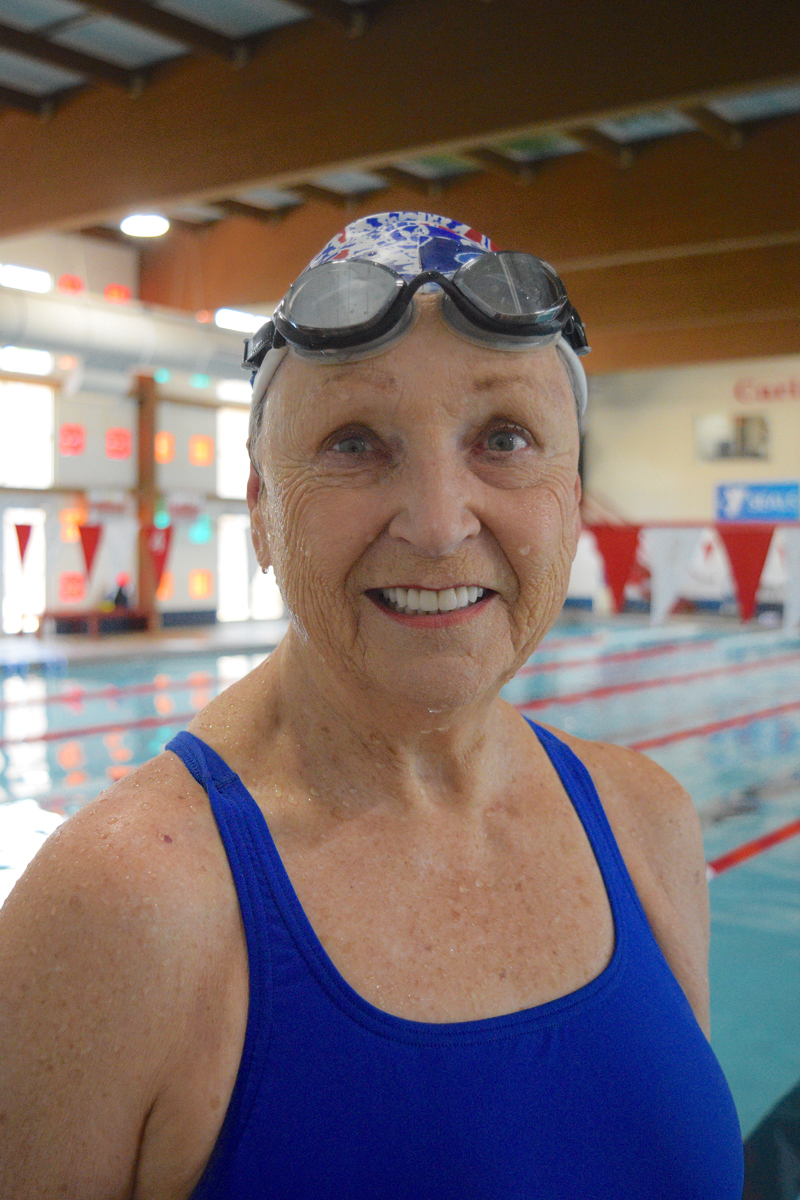 Burke continues to practice three times a week at the Hot Springs Family YMCA. – Photo by Donald Cross of The Sentinel-Record 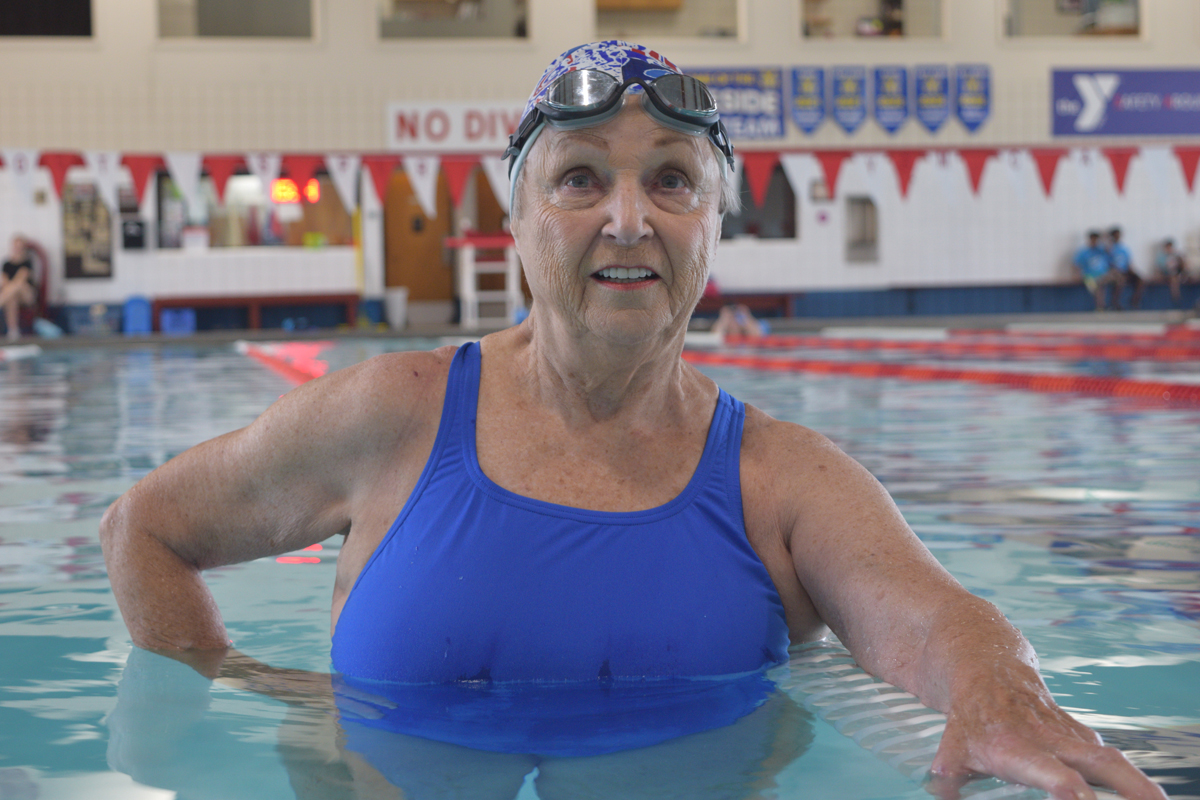 The cancer survivor said the reason she was able to recover so quickly was because of her active lifestyle. – Photo by Donald Cross of The Sentinel-Record