Week off timely for Hogs before five-game push 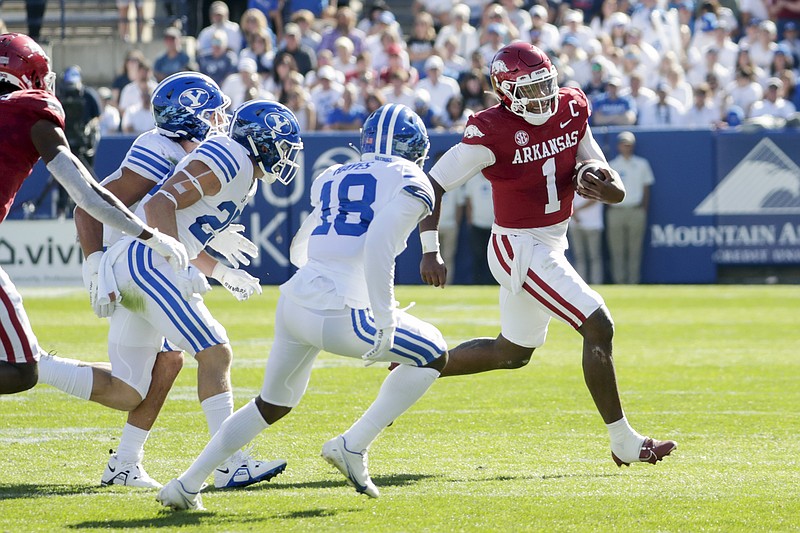 Arkansas quarterback KJ Jefferson (1) runs the ball against BYU Saturday in Provo, Utah. - Photo by Ben B. Braun of The Deseret News via The Associated Press

On a football Saturday that Alabama and Tennessee lit up the sky, another Southeastern Conference team's score crawled across the screen like thunderstorm warnings.

Arkansas 52, Brigham Young 35 intrigued what niche audience it found on ESPN and brought to LaVell Edwards Stadium in Provo, Utah. Although, make no mistake, in terms of crowning the year's national champion in football, it mattered not.

To its credit, Arkansas won in October, outside the Central Time Zone and in altitude -- all for the first time in 2022. A 4-3 record gives Arkansas hope of at least two wins in its five remaining games to secure a third-straight bowl berth under coach Sam Pittman (the Hogs beat Penn State in the Outback Bowl after their Texas Bowl date with TCU in 2020 was lost in the pandemic year).

The Brigham Young game also produced a game note about 1940s Razorback hero Alton Baldwin, who along with Eugene "Bud" Canada (both from Hot Springs and since deceased) played for John Barnhill's Cotton Bowl team of 1946.

Baldwin's star turns came for teams coached by UA basketball man Glen Rose, neither a factor in the Southwest Conference and like everyone else awaiting returns from battles against the Axis powers in Europe and Japan. Baldwin set his records in years when the U.S. Military Academy produced back-to-back Heisman Trophy winners (Glenn Davis and Doc Blanchard) and passing teams were generally regarded as desperate.

Although lacking a receiver like first-year pro Treylon Burks, Jefferson passes enough, and well enough, to augment his running ability and lend balance to an offense that carries the load for this team.That mix sent Arkansas to a 9-4 record last year with wins over Texas, Texas A&M and Penn State. Until dinged up in recent weeks, Jefferson had Arkansas up to 3-0 in the polls with a sweep of Cincinnati, South Carolina and Bobby Petrino-coached Missouri State.

Jefferson, held out last week against Mississippi State after taking licks against Alabama, completed 29-of-40 passes for 367 yards with no interceptions. Trey Knox and Rashod Dubinion also caught touchdowns in a game Arkansas controlled from the second quarter, 24-8 for 31-21, and scored three more times in the second half.

Raheim Sanders, overcoming a first-quarter fumble, banged out 175 yards rushing on 15 carries. His breakaway for 64 yards and second score Saturday helped Arkansas fans (some made the trip) further enjoy the fourth quarter.

Arkansas won with 644 yards and despite allowing 471. Critically, the Hogs had only one turnover but, even with a suspect defense, collected three takeaways. Arkansas' inability to force errors was a recurring theme in losses to Texas A&M, Alabama and Mississippi State in consecutive weeks.

The coming bye week meets Arkansas' needs before an Oct. 29 game at Auburn and November dates with Liberty, Ole Miss, LSU and Missouri, the only other road game. Ole Miss, which lost at Fayetteville two years ago and beat Arkansas by one point last year in Oxford, is unbeaten and ranked highly. Some of the Rebels' toughest games lie ahead (Alabama, LSU and the Egg Bowl with Mississippi State) but Lane Kiffin's third Ole Miss team buried Auburn on Saturday with multiple running backs.

Arkansas should have a revenge motive against Auburn stemming from its controversial 2020 loss at Jordan-Hare Stadium and last year's Fayetteville setback, when Pittman's team couldn't get the handle on Bo Nix. That veteran quarterback is now at Oregon while second-year coach Bryan Harsin likely needs a strong finish to keep his job.

Harsin's plight on the Plains brings to mind another former Arkansas State coach whose seat may be warming. Any bets on whether second-year man Butch Jones coaches the Red Wolves (2-5, 1-3 Sun Belt Conference) against Arkansas in 2025 at War Memorial Stadium?

Print Headline: Week off timely for Hogs before five-game push