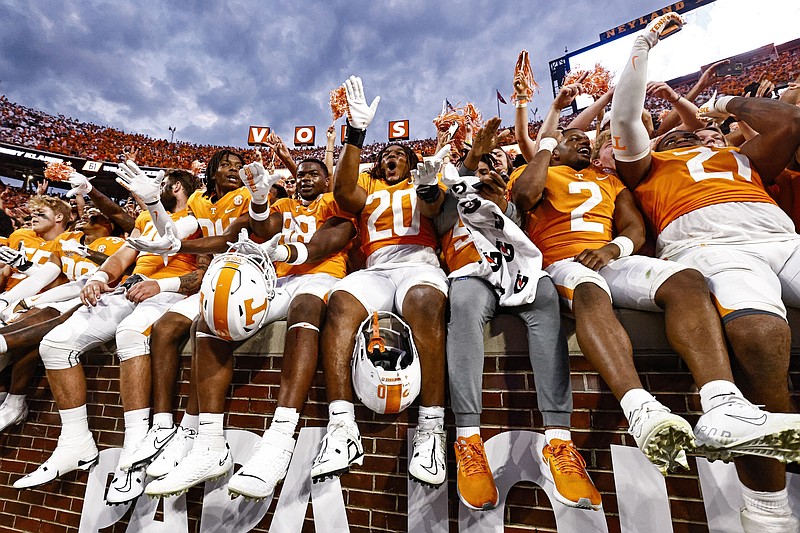 Tennessee running back Jaylen Wright (20) and teammates celebrates a 38-33 win against Florida Sept. 24 in Knoxville, Tenn. - Photo b y Wade Payne of The Associated Press

A sports fan's television channel clicker seldom was needed more than on Saturday, the hallowed third one in October for a Southern football fan with postseason baseball requiring constant look-ins.

Readers of this space were introduced last week (though not by name) to Olivia's parents, two longtime Southeastern Conference watchers. Daddy is from Tennessee and cheers for the home-state Vols; Mommy, though from Mississippi, lives and dies with Alabama, which in college football is like, the saying goes, rooting for U.S. Steel.

Alabama played Tennessee again, this time both unbeaten and in the Associated Press top 10, their biggest Third Saturday matchup in years. And they'll be talking about it, well, until Olivia, turning 9 in December, has gray hair.

A call to her parents' Mississippi home found Daddy screaming like longtime (since deceased) Tennessee broadcaster John Ward might have had he been calling this instant classic from Neyland Stadium in Knoxville."Give him six," Ward often bellowed after a Tennessee touchdown. Although the last scoring play Saturday counted only three points, it was worth waiting 16 years for.

With two baseball games airing at the same time, Chase McGrath booted a 40-year field goal as the scoreboard clock went all zeroes. Like Phil Niekro and Hoyt Wilhelm years ago on the baseball diamond, McGrath served up a knuckleball, one in jeopardy of falling short until disappearing over the crossbar.

Tennessee 52, Alabama 49. The orange-clad faithful stormed the field after the Vols' first win over the Crimson Tide since 2006, a year before coach Nick Saban arrived in Tuscaloosa. The Southeastern Conference is sure to fine Tennessee fans for that outburst, not that any cared. They were too busy singing "Rocky Top," about to bring down the goal posts in those orange checkerboard end zones.

Not since a slideline battle in 2006 between Phillip Fulmer and Mike Shula, Tennessee winning 16-13 on the Third Saturday before more than 106,000 at Neyland Stadium, had the Vols smoked the cigar that the winner of this series once claimed as a privilege.

Neither McGrath nor Tennessee coach Josh Heupel is likely to pay for a meal in Knox County, Tennessee, for some time. Quarterback of the last Oklahoma football team (2000) to win a national championship, Heupel served as defensive coordinator at Missouri under Barry Odom (now Arkansas DC under Sam Pittman) until succeeding the recently fired (by Nebraska) Scott Frost at Central Florida.

Heupel relocated at Tennessee in place of the fired Jeremy Pruitt, a former Alabama DC under Nick Saban. The Football Writers Association of America named Heupel its first-year Coach of the Year in 2018 at UCF and in 2021 at Tennessee. The Vols' 7-6 record, though including the 15h-straight loss to Alabama, included a bowl trip and was generally judged successful.

Though No. 1 Georgia must be played (Nov. 5 in Athens), Tennessee is 6-0 after its most satisfying win in years.

At crunch time, Hooker connected to the Alabama 23 after a missed Crimson Tide field goal. Two seconds were put back on the clock, giving McGrath time to work on his knuckleball kick. As in the 2013 Auburn game ("Kick, Bama, Kick"), bad things happened to Alabama when time was extended.

Tennessee, which led 21-7 early and 28-20 at halftime but trailed 49-42 in the fourth quarter, in the end did to Alabama what Texas could not do at Austin and Arkansas fell short at Fayetteville. As evidenced by 17 penalties for 130 yards, the most during the Saban era, this is not a vintage Alabama team. But the Crimson Tide, in the weaker SEC Western Division, still have a straight shot to the league championship game in December.

After years that Alabama (and pick another West team) dominated the headlines, defending national champion Georgia and Tennessee, both undefeated, have revised the script in the East's favor. Tennessee's 38th win over Alabama, most by any Tide opponent, made this Third Saturday series a rivalry again.

Hopefully, Olivia's hearing won't be impaired by all the shouting in her house.