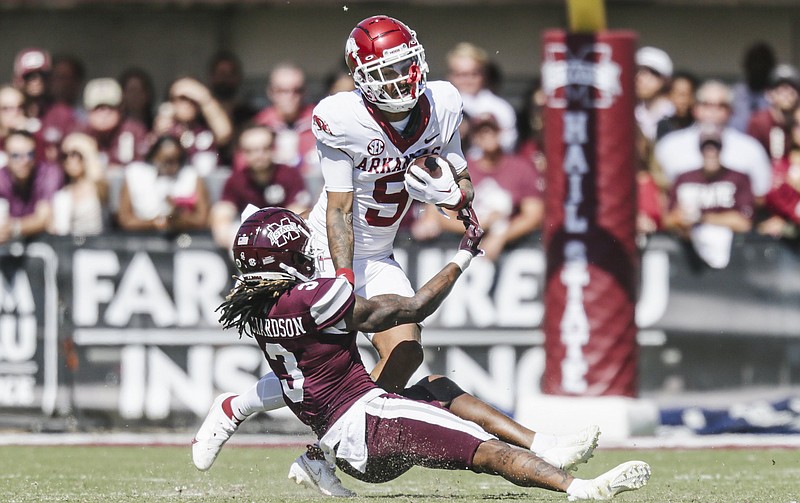 A fall Saturday without Razorback football is like Louisville on the second Sunday in May after the Kentucky Derby.

While Commonwealth of Kentucky residents who fancy horse racing -- think anyone could find a quorum? -- look ahead to the next year's Derby, others victimized by price gouging at local establishments on top of what they drop at Churchill Downs begin regrouping.

Things aren't quite that extreme on an Arkansas Saturday without Razorback football but, as one prominent Oaklawn trainer said one spring about life here, "There's not a hell of a lot else to do down here."

Arkansas, it is said often, has only one professional sports team -- the Razorbacks. They receive saturation coverage from the statewide newspaper with special interest on football and basketball. Smaller newspapers -- a dwindling number, to be sure -- face a desperate game of catch-up, if they choose to enter, in placating that fan base. One Little Rock TV station has turned its nightly sports reports into Pig Trail Nation.

The University of Arkansas has a nationally prominent track program, yet the football team's backup quarterback gets more press than the team's fastest runner. Or Arkansas State's No. 1 quarterback. Henderson State, Ouachita Baptist and our other Great American Conference schools (including alma mater Harding) have strong local followings -- at least that's true in Arkadelphia and Searcy -- but how many scramble for a score from Monticello or Russellville?

With that in mind, an open football Saturday for the Razorbacks should be a default setting for the unique Henderson-Ouachita matchup, the Battle of the Ravine. Never mind that it's usually played in November -- because of campus hooliganism or conference restructuring, some years it's not been played at all. That game, which every Arkansas sports fan should attend, holds more fascination than any Great American date matching an in-state team and a directional opponent from Oklahoma. Little Rock columnist Wally Hall filed an Arkadelphia dateline one year that the Razorbacks became unwatchable.

Unlike when, say, Chad Morris was coaching, these Razorbacks still command attention as the fifth Saturday of October nears. They have cooled off since vaulting into the national Top 10 but, at 4-3, have bowl hopes and fans willing to travel. Eric Musselman's basketball team, No. 10 in the first Associated Press poll, must wait its turn until Sam Pittman's football squad yields the stage.

Perceptions can change, and quickly. A long November beckons if Arkansas loses Saturday at Auburn, that rare Southeastern Conference team with a 2-0 mark against Pittman; the third-year UA coach came from Georgia, its football series with Auburn the oldest in the South. The 11 a.m. starting time, earliest the SEC office affords, alone tells you that on the same day as Florida vs. Georgia this isn't the biggest game.

Consecutive home games against Liberty (ex-Ole Miss coach Hugh Freeze keeps Jerry Falwell's school on the fringes of national contention), LSU and Ole Miss should let one estimate how many Hog fans are watching, and how keen their interest in, the Missouri game on Thanksgiving Friday. By then, a bowl team (Arkansas becomes eligible with two more wins) or not, football will reach a crescendo in our state or wane considerably.

December brings Oaklawn, Arkansas' fifth season, into play, something else that the state's average sports fan takes seriously. Football, in a really good season, encompasses all, though good luck for anyone seeking information on the Razorbacks' most recent opponent. Open (bye week, for some), it is said, might be more effective if it played a regular schedule.