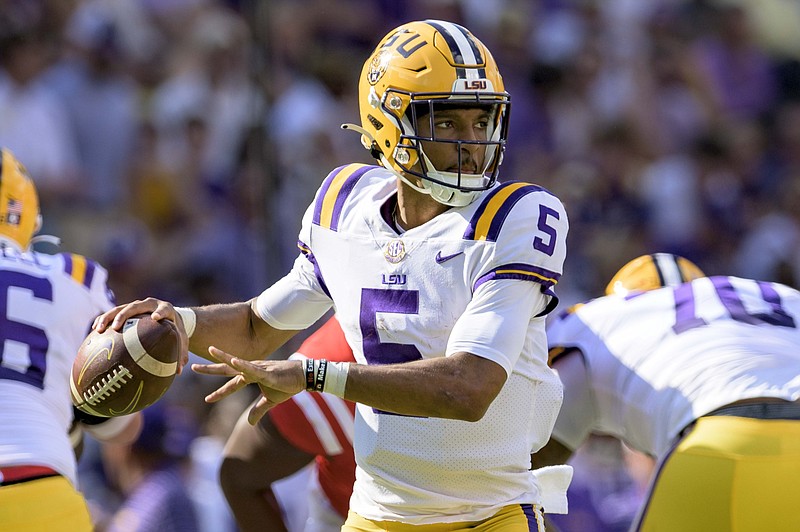 LSU quarterback Jayden Daniels (5) looks to throw during the first half against Ole Miss Saturday in Baton Rouge, La. - Photo by Matthew Hinton of The Associated Press

Even if LSU was the opponent, I wouldn't expect much remorse for the Ole Miss football team, unbeaten and ranked No. 7 nationally before its weekend game. (But no longer.)

Throw in Texas, and you have three teams that my late father enjoyed seeing lose on any given Saturday. On this date, two did.

Junior Jayden Daniels, playing quarterback on the field that former Tiger Joe Burrow won the 2019 Heisman Trophy, kept Ole Miss off balance all day. Daniels passed for 248 yards (completing 21-of-28) and ran for a game-high 121, accounting for five touchdowns.

Ole Miss sophomore Jaxson Dart passed for 284 yards but flung an end-zone interception when the Rebels looked to overturn a 24-20 deficit in the third quarter. Matt Jones is the only quarterback I remember winning with one, and he needed the Miracle on Markham (Arkansas 21, LSU 20 -- the 2002 Tigers coached by Nick Saban).

In first-year coach Brian Kelly's most notable LSU victory, the Tigers promptly went 80 yards in nine plays, four on the ground with five passes. Daniels, scoring three touchdowns by land, and the Tigers outscored the Rebels 42-3 after down 17-3.

Before-and-after looks at the Southeastern Conference Western Division race proved quite different. Ole Miss dropped into third place at 3-1, a half-game behind Alabama and LSU. Alabama, after giving up 49 points to East Division co-leader Tennessee, took care of visiting Mississippi State at night, the Bulldogs not scoring until the final play in a 30-6 loss. Mike Leach, as most Hail State coaches against Alabama, looked lost on the sideline.

Ole Miss, 7-1 overall, plays at Texas A&M before a bye week. Then come Alabama, Arkansas and Mississippi State, the latter game in Oxford on Thanksgiving.

Ole Miss, which last won an SEC football title in 1963, dreamed of a 10-0 record before Alabama came to Vaught-Hemingway Stadium Nov. 12. Now, Kiffin's squad goes up against the SEC's most disappointing team, once ranked in the national top 10.

Alabama, it should be reminded again, controls its own fate for the SEC championship game Dec. 5 in Atlanta, even with roadies against the other West co-leaders. What looks on paper like a Saban-coached team with defensive flaws (at least before the A&M game) still has the reigning Heisman Trophy winner (Bryce Young) and a linebacker (Will Anderson Jr.) with national prominence. Don't bet against a game (or two) with top-ranked, East Division leader Georgia after the season.

Perhaps Ole Miss wasn't an 8-0 team after all. Dart's end-zone pick was especially gruesome, and Kelly's Tigers continued their million-mile ascent from a first-game fiasco against Florida State. Running and passing at will, the Tigers looked nothing Saturday like the team Tennessee roughed up 40-13 on the same field.

The Vols play Kentucky at home Saturday then Georgia 'tween the hedges at Athens before low-cal SEC East snacks Missouri and Vanderbilt (A&M can attest that South Carolina on the road is no lark).

How does Arkansas figure in this mix, you ask? At 4-3, 2-3 in the West, the Hogs need a win Saturday at Auburn to make consecutive home games against LSU and Ole Miss (fronted by Liberty) especially savory.

Before this past weekend, I considered Arkansas a certain underdog against Ole Miss and iffy against LSU, which showed pangs of life winning at Florida. Now, a second look is in order.

These Razorbacks lack depth at too many spots to finish very high but any team with Bumper Pool at linebacker and KJ Jefferson at quarterback should not be taken lightly. Still, all bets are off with a discouraging result at Auburn.